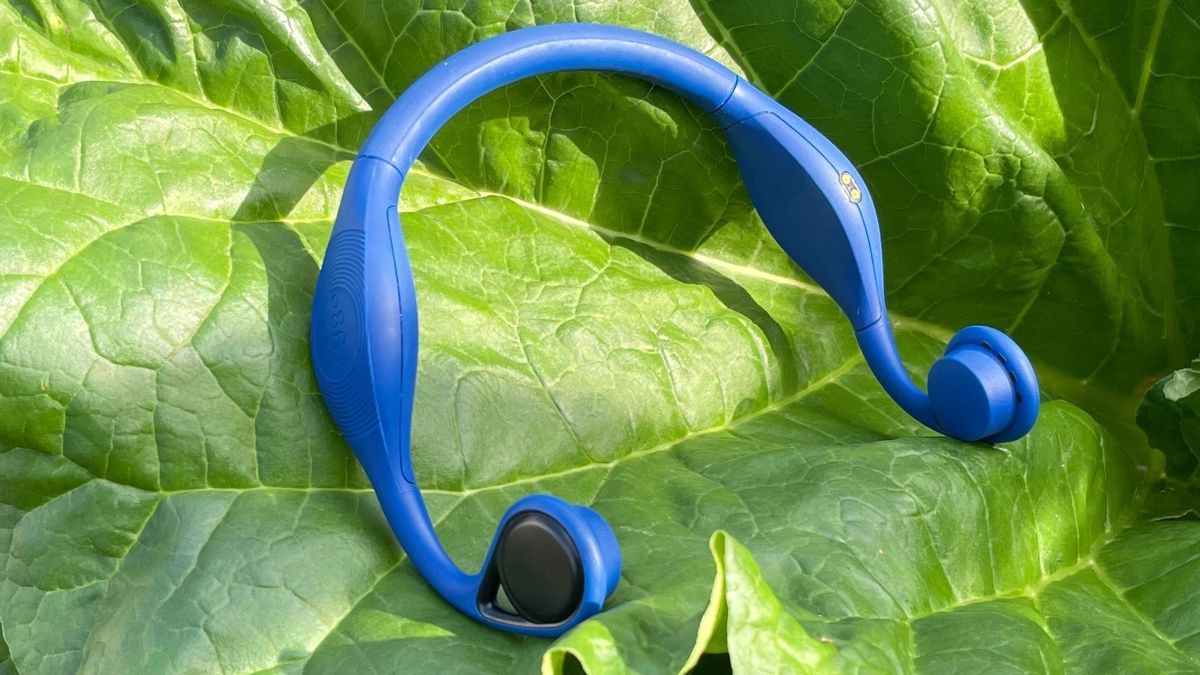 Is this the Peloton of the pool? With the success of that workout streaming service clearly in its sights comes Zygo Solo, a unique audio gadget for swimmers.

We’ve seen waterproof headphones before, but not like this. Since Bluetooth can’t penetrate water, all other swim headphones are little more than waterproof MP3 players (pretty much that music file format’s last stand). The Zygo Solo is different, and is able to stream content from a smartphone through water using an FM transmitter that can penetrate water.

It’s something of a ‘hallelujah!’ moment for swimmers, many of whom have by now experimented with the Sony Walkman NW-WS413 and then the Aftershockz Xtrainerz, both of which are good at what they do, but only play MP3s. Does anyone even have any MP3s anymore?

A four-piece set consisting of headset, FM transmitter, stand and charging case, the Zygo Solo has a lot more hardware than your average pair of super-slim swimming headphones.

It works like this: your phone connects to the FM transmitter via Bluetooth and the transmitter to the headset via radio frequency. It’s easy to set up, though there’s definitely more physical equipment to deal with. It also means taking a lot of gear poolside. Fine in a private swimming pool, but not so great in a public pool where you’ll have to keep one eye on your stuff while you swim.

Nevertheless, committed swimmers with the right environment will adore the Zygo Solo. A long overdue audio upgrade for the pool, it’s surprisingly easy to use, offers great FM-quality sound and has hundreds of excellent on-demand workouts that can really change how you approach your swimming fitness. Or you can just listen to your own music, audiobooks or podcasts without having to drag-and-drop MP3 files prior to a swim.

How does Zygo Solo compare to its underwater MP3 player competitors? It blows them out of the water, of course – and it’s priced accordingly.

If you want Peloton-inspired streaming swim workouts (comprising short and long audio workouts delivered by instructors and paired with music) then you also need to take out a Zygo All Access Monthly Plan, which costs $14.99 / £12.99 (about AU$20) per month after a 14-day trial.

In future Zygo tells us it’s planning metric tracking similar to that offered by the best running watches, leaderboards, and truly Peloton-style live classes. On Zygo’s website you can purchase an app gift certificate for an entire year for $149 / £108 (about AU$200), which gives you two months free.

The Zygo Solo is, technically speaking, by far the most ambitious set of swimming headphones available. Predictably that means it comes with some baggage. The package consists of an IP68-rated waterproof headset, an IP67-rated (waterproof for 30 minutes) FM transmitter and stand, a pair of earplugs and a charging case.

While the Sony Walkman NW-WS413 and the Aftershockz Xtrainerz weigh 32g and 29g, respectively, the Zygo Solo headset weighs 66g. Why? It’s got a radio receiver as well as a battery inside that makes it possible to receive audio from the FM transmitter connected wirelessly to a smartphone.

The 101g FM transmitter itself is a figure of eight-shaped device that’s also waterproof, so it’s fine to leave it close to the water. Also included is a small 25g holder for the FM transmitter that keeps it upright, which extends its range.

Meanwhile, the charging case itself weighs 450g, and 623g with both the headset and the transmitter inside. Resembling the kind of case you might find housing a pair of the best noise cancelling headphones, it’s rounded and compact, and fairly easily fits inside a swim bag. The headset also has an accelerometer inside, so expect activity tracking soon.

Connects via FM transmitterStreams any audio from a smartphone

The headset feels reasonably solid and unwieldy at first – it is, after all, more substantial than a basic swim MP3 player – partly because it’s designed to stay firmly in place during underwater turns. It’s chunkier because it’s got more hardware inside.

What’s really different about the Zygo Solo compared to MP3 swim players is that you have to have the FM transmitter and your smartphone poolside. That FM transmitter works to a range of 50 meters – so the size of an Olympic swimming pool – which is generous enough (it can also transmit to an unlimited number of headsets). However, if you’re used to leaving your phone in a locker and entering a neighborhood pool deck with just a towel, having to take a smartphone and an FM transmitter is a bit of a change.

The 50m limit applies only to swimming pools, with a half-mile range promised in the great outdoors. So you could get away with wearing a Zygo Solo while open water swimming, surfing, canoeing, kayaking, water skiing and even sailing.

Make no mistake about what Zygo is trying to do here; streaming live audio underwater is not easy. In fact, the tech it took two years to perfect. The Zygo Solo’s sound is good. Out of the pool it sounds a little tinny, but in the water it suddenly gets a lot of bass.

Let’s not overdo it; this is not audiophile quality, and overall the impression is (not surprisingly) of FM radio-like sound, with a little crackle and hiss now and again. However, at all times it sounds much better than any waterproof MP3 player. That is, if you remember to use the earplugs.

Like the Aftershockz Xtrainerz the Zygo Solo uses bone conduction, a technology that employs an open-ear design and transmits audio through vibrations in the cheekbones directly into the inner ear.

You don’t need to use the included earplugs, but if you don’t you’ll find that every time your ears are not immersed the quality of sound drastically changes. So for a more consistent experience it’s best to use the earplugs.

We found the headset to be reasonably comfortable when worn for long periods, largely because the bone conduction design leaves your ears alone, though it did begin to feel slightly tight after about half an hour. The advice is to put the headset on, followed by a swim hat, goggles and then earplugs.

As a nice bonus the transmitter doubles as a walkie talkie, so a coach can speak to a swimmer directly as they swim in the pool. What the headset doesn’t have is a microphone, so you can’t answer back … or make hands-free calls from the pool.

The Zygo app for iOS  and Android has had a lot of investment in it and is arguably the best reason to invest in Zygo Solo. It’s not free, but there’s a huge choice of classes and activities inside. As a few random examples we found a 20-minute beginner-level tutorial in learning backstroke, an intermediate 30-minute HIIT workout and a ‘fun’-grade 25 minute DJ drill set to music.

Each one has excellent instructors and a lot of music, the latter the result of various licensing deals struck between Zygo and the music industry.

We counted over 50 drills, which seems good value, which can be browsed on a timeline but also by specific genres, such as ‘strengthen and lengthen’, ‘5 days of fitness’ and ‘your first sprint triathlon’. It’s best to download them on WiFi within the app before hitting the pool.

However, the app does need a queue so that lessons and drills can follow-on from each other. Since some are only a few minutes long you can easily find yourself completing a drill and then swimming in silence.

In future Zygo tells us it’s planning to go full-Peloton and add live classes and leaderboards, with new software incoming that will use the built-in accelerometer to track your activity in the pool.

The app works independently of the device, so in theory you could just subscribe to the app and use all the workouts … though the Zygo Solo is so far the only way to stream content underwater.

Inside the Zygo Solo headset is a battery that lasts for three hours, and the transmitter lasts for around six hours. Sadly the hard-sided charging case itself doesn’t hold a charge, but if you snap both gadgets into place in its molded interior, both nestle up against precisely-placed connectors and begin charging automatically if the case is hooked up to power via a micro-USB cable.

It’s a shame the case doesn’t contain a battery of some kind, and micro-USB also feels slightly outdated given the popularity of USB-C.

You want to get more out of swimmingIf swimming is your sport and you want to get as much from it as possible then you’ll love the Zygo app’s workouts and coaching tips. For those who swim casually but get bored, the ability to listen to music, podcasts and audiobooks is a game-changer.

You’re done with MP3sIt’s not 1999. Why should you be side-loading anything with MP3 files on a regular basis, as most swim MP3 players insist upon. Zygo Solo lets you stream any content from your phone underwater.

You can’t keep an eye on your stuffThe Zygo Solo requires that you have both your smartphone and the radio transmitter pool-side. If you’re swimming in a public pool then keeping an eye on a bag full of expensive stuff might not be easy. That will depend on the size and layout of the pool you use.

You’re a diverIt may be unique, but the Zygo Solo is designed to stream audio through shallow water only. Its transmitter is able to stream to a headset up to 2ft / 60cm below the surface and to a distance of about 55 yards / 50 meters.