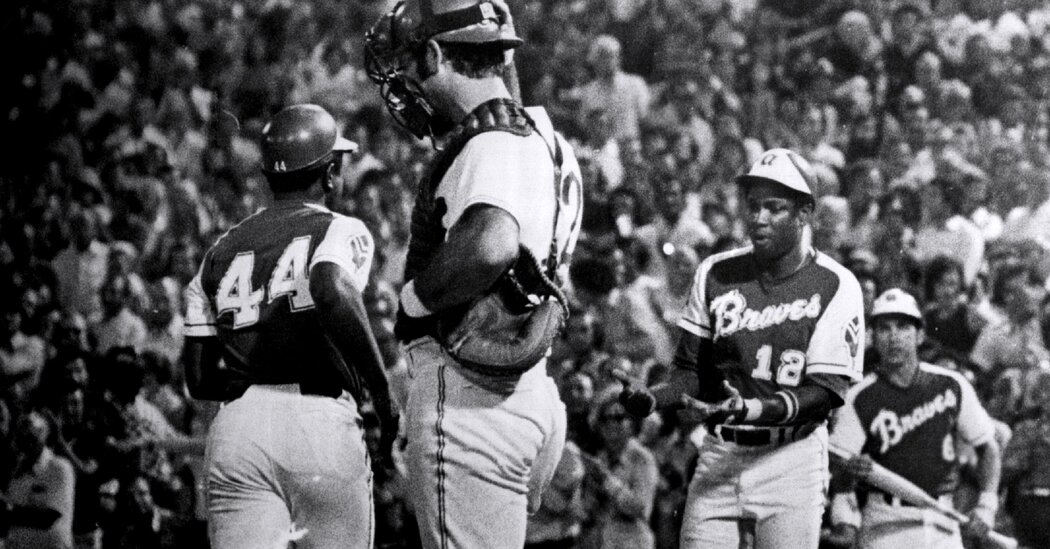 HOUSTON — As Ralph Garr remembers it, the kid from Sacramento could have made it big in any sport. The Atlanta Braves chose Johnnie B. Baker Jr., known as Dusty, out of high school in the 26th round of the 1967 draft. They knew he had options, but they also had a secret weapon.

“Dusty could have made the major leagues in football, basketball or baseball, and I don’t think he cared as much about baseball,” said Garr, a third-round draft choice that year. “But Dusty was drafted by the Braves, and Henry Aaron called his mother and said he’d take care of him.”

Aaron was 33 years old and on his way to breaking Babe Ruth’s career home run record. When Aaron did it, with homer No. 715 in 1974, Christine Baker’s son was in the on-deck circle at Atlanta-Fulton County Stadium. It was a case, you might say, of slugger knows best.

“I prayed not to go to the Braves,” Baker said on Sunday, in the dugout at Minute Maid Park, where his Houston Astros will host Atlanta in the World Series opener on Tuesday. “There were freedom marches, riots, segregation, anti-Vietnam, anti-short-hair — I mean, there was a lot of turmoil, and all the Braves’ teams were in the South. The deep, deep, Deep South.

“But that was the best thing to ever happen to me, because I wouldn’t have met Hank Aaron.”

Aaron died in January at age 86. He remains an inspiration for Baker, 72, who is managing in the World Series for the first time since 2002. For Aaron’s protégé and primary team to meet in the World Series, just nine months after his death, is a reminder of a legacy that went far beyond home runs.

“If Henry is watching down, he will enjoy this World Series because of Dusty, above all,” Bud Selig, a former commissioner of Major League Baseball, said by phone on Sunday. “Certainly because of Atlanta, too. But mostly Dusty.”

Aaron was one of Selig’s closest confidants, with a friendship dating to the Braves’ years in Milwaukee and Selig’s ownership of the Brewers, Aaron’s final stop in a 23-year playing career that ended in 1976. Aaron was quiet and thoughtful, Selig said, a decent and loyal man who kept his bond with Baker until the end.

“Henry had very deep feelings and great affection for Dusty,” Selig said. “There’s no question he was as close to Dusty as maybe any other player, and he was very sensitive to him. Some of the criticisms of Dusty, from time to time, would aggravate Henry, and he thought it was unfair.”

Baker is 12th on the career list for victories by a manager, with 1,987. He has more wins and a better winning percentage (.534) than others widely hailed for their acumen, like Whitey Herzog, Jim Leyland and Buck Showalter. Baker is celebrated for his interpersonal skills, but not as much for his strategy.

After winning the American League pennant on Friday, Baker said he knew why.

“As an African American,” he said, “most of the time they don’t really say that you are of a certain intelligence.”

“About being a man, helping people, being as honest as possible, much of the same lessons that my dad taught me about this life,” Baker said. “Being a proud African American but not wearing that on your sleeve because it’s already on your face, you know what I mean?”

Baker added: “He really taught me discipline. This guy was the most disciplined guy, hard-working guy, highest-concentration-level guy that I’ve ever met.”

In the minors, of course, Aaron was not around to shepherd Baker through places like Austin, Texas; West Palm Beach, Fla.; Richmond, Va.; Greenwood, S.C.; and Shreveport, La. Garr, who had attended Grambling State University and is about four years older than Baker, helped educate Baker on the cultural differences from Sacramento.

Once, Garr said, a police officer noticed Baker smiling at a white woman at a concert. The officer confronted Baker and shook him, Garr said, but Garr intervened and defused the situation. Life is different here, Garr explained to Baker.

“You couldn’t just bring California to the South, and there were things that he didn’t quite understand,” Garr said. “But he made adjustments. One thing about Dusty: you don’t have to tell him something more than once.”

After the Braves drafted Baker, Aaron had reasoned with him that if he believed he could reach Atlanta before his college class would graduate, then going pro was the better choice. Baker did that easily, making his debut at age 19 in September 1968, grounding out as a pinch-hitter for Phil Niekro in a game against the Astros.

Baker arrived in the majors for good in 1972, and the next year he shared the outfield with Aaron and Garr on opening day. They were constant companions.

“Ralph Garr and Hank Aaron and I were together all the time,” Baker said. “We were over at his house and I was closer in age to his kids than I was to him. So I was always playing with his kids. I’m still very close and talk to his kids all the time.”

Aaron mentored other young teammates like Cito Gaston, who played with both Aaron and Baker, though not at the same time. When Gaston was young, he said, Aaron roomed with him and taught him how to tie a tie. When Gaston was older, Aaron persuaded him to start a coaching career in the Braves’ farm system, which Aaron directed.

Gaston would become the first Black manager to win the World Series, for Toronto in 1992 — against the Braves — and again in 1993. He sees some of Aaron in Baker.

“I think Dusty’s the same as Hank in that they treat people like you’d like to be treated,” Gaston said. “Dusty’s players respect him because he respects them.”

Aaron also hired Atlanta’s current manager, Brian Snitker, who is white, as an instructor after Snitker’s minor league playing career ended in 1980. Snitker would manage for 20 years, across every level of the farm system, before getting his chance to manage in the majors in 2016.

Snitker, then, endured a different kind of challenge on his climb: He never played in the majors and could have easily been typecast as a minor league lifer. Now, like Baker, he is in the World Series.

“Henry Aaron would be so proud of the whole situation,” Garr said. “He thought everybody deserved an opportunity and a chance. I know he’s grinning up in heaven right now.”