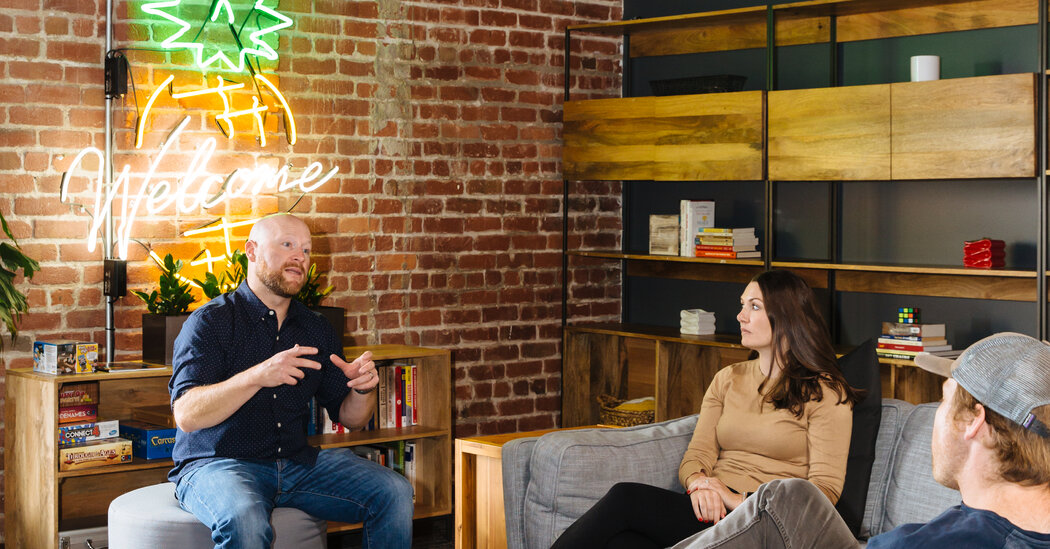 SAN FRANCISCO — Before the pandemic, Envoy, a start-up in San Francisco, sold visitor registration software for the office. Its system signed in guests and tracked who was coming into the building.

When Covid-19 hit and forced people to work from home, Envoy adapted. It began tracking employees instead of just visitors, with a screening system that asked workers about potential Covid symptoms and exposures.

Now as companies begin reopening offices and promoting more flexibility for employees, Envoy is changing its strategy again. Its newest product, Envoy Desks, lets employees book desks for when they go into their company’s workplace, in a bet that assigned cubicles and five days a week in the office are a thing of the past.

Envoy is part of a wave of start-ups trying to capitalize on America’s shift toward hybrid work. Companies are selling more flexible office layouts, new video-calling software and tools for digital connectivity within teams — and trying to make the case that their offerings will bridge the gaps between an in-person and remote work force.

The start-ups are jockeying for position as more companies announce plans for hybrid work, where employees are required to come in for only part of the week and can work at home the rest of the time. In May, a survey of 100 companies conducted by McKinsey found that nine out of 10 organizations planned to combine remote and on-site working even after it was safe to return to the office.

Providing tools for remote work is potentially lucrative. Companies spent $317 billion last year on information technology for remote work, according to the research company Gartner. Gartner estimated that spending would increase to $333 billion this year.

Hybrid and remote work have the potential to benefit workers for whom office environments were never a good fit, said Kate Lister, president of the consulting firm Global Workplace Analytics. This includes women, racial minorities, people with caregiving responsibilities and those with disabilities, along with introverts and people who simply prefer to work at odd hours or in solitude.

But she and others also warned that the move to hybrid work could make remote workers “second-class citizens.” Workers who miss out on the camaraderie of in-person meetings or the spontaneity of hallway chats may end up being passed over for raises and promotions, they said.

That, start-up founders argue, is where their products come in.

Rajiv Ayyangar, the chief executive and co-founder of Tandem, leads one of several software start-ups that have created desktop apps that help teams better collaborate with one another and that recreate the feeling of being in an office. He said Tandem’s product was trying to help with “presence” — the ability to know what one’s teammates are doing in real time, even if the worker is not with their colleagues in the office.

Tandem’s desktop program, which costs $10 a month for each user, shows what teammates are working on so colleagues know if they are available for a spontaneous video call within the app. The list of user statuses automatically updates to let people know if their co-workers are on a call, writing in Google Docs or doing some other task.

Pragli and Tribe, two software start-ups that have been around since 2019, also offer similar products. People can use Pragli’s product to create standing audio or video calls that others can join. It is free, though the company plans to introduce a paid product. Tribe’s software uses busy and available statuses to facilitate in-platform video calls; it is currently only accessible with an invitation.

Owl Labs, a start-up founded in 2017, is also trying to tackle “presence.” It makes a 360-degree video camera, microphone and speaker that sits in the middle of a conference table and automatically zooms in on the person who is speaking.

The company, which said its customers quadrupled to more than 75,000 organizations over the pandemic, said the $999 camera was a way for remote workers to participate in office meetings by being able to see everyone who is speaking, rather than the limited view enabled by a single laptop camera.

Other start-ups, such as Kumospace and Mmhmm, said they were working on improving video communications for hybrid work. Kumospace, a video-calling start-up, structures calls so that users enter a virtual room. They then navigate the room using arrow keys and can talk to people when they are close to them.

The design is meant to replicate in-person socializing, where people can mill around and have multiple conversations in the same room. That contrasts with a service like Zoom, where everyone is by default in the same conversation as soon as they enter the video call.

Mmhmm, which was created by the founder of the note-taking and productivity app Evernote, Phil Libin, offers a variety of interactive video backgrounds, tools for sharing slideshows and other features for live conversations and asynchronous presentations. It has a free version and a premium version, which costs $8.33 per employee a month.

Some companies said their products can help businesses understand their space usage as fewer workers come in needing desks. Density, a start-up in San Francisco, makes a product that uses custom depth sensors to measure how many people are entering an area or use an open space. Companies can then analyze that data to understand how much of their office space they are actually using, and downsize as necessary.

Density also plans to offer other tools for hybrid work. Last month, it acquired a software start-up that provides a system for desk and space reservation.

Envoy said its new Desks product had attracted 400 companies, including the clothing retailer Patagonia and the film company Lionsgate.

Lionsgate said it had used Envoy’s products since before the pandemic. When the coronavirus arrived, it turned to Envoy’s employee-screening software to provide health checks to those entering the office.

Now, as more employees return to in-person work, the company is using Envoy to manage where everyone sits, as well as to track who is coming in. Lionsgate said the information can help determine how often teams will need to be in the office.

“We’ll be able to know really how much space we need,” said Heather Somaini, Lionsgate’s chief administrative officer. “So I think it’ll be really useful.”