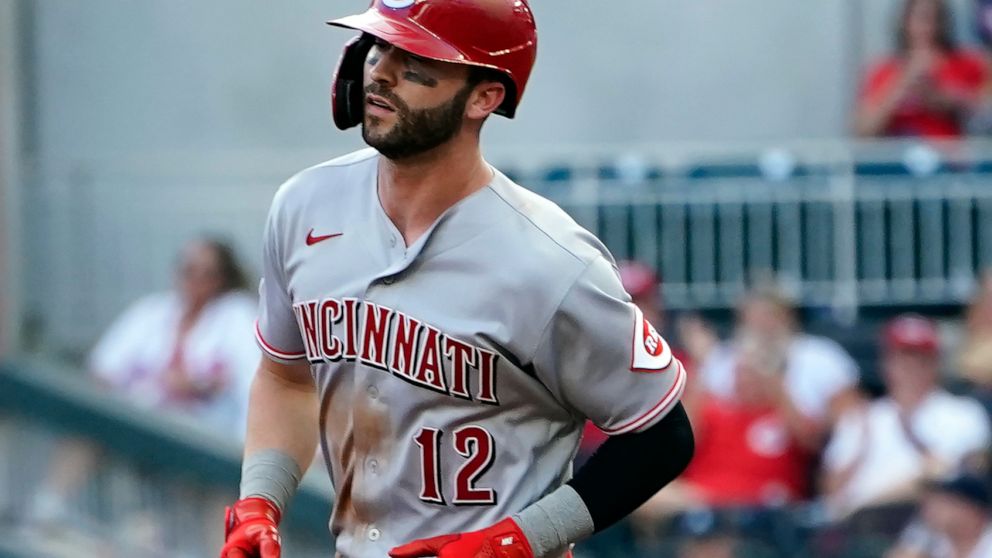 ATLANTA — Jesse Winker hit a grand slam in the second inning, the Reds added four more homers, and Cincinnati snapped a three-game skid with an 12-3 victory over the Atlanta Braves on Thursday night.

Winker’s 24th homer, the second grand slam of his career, cleared the wall in right field to give the Reds a 4-1 lead after singles by Tyler Naquin and pitcher Vladimir Gutiérrez and a walk to Jonathan India.

The loss dropped Atlanta, which had won three straight and eight of 10, one game behind first-place Philadelphia and into third place in the NL East. The New York Mets are in second place, a half-game ahead of the Braves, who began the day tied for first.

“With the three teams, that could be a daily occurrence, too, but that’s OK,” Atlanta manager Brian Snitker said. “We’re right there. You know what I mean? We’re going to fight … to get back there.”

Cincinnati, which remained eight games behind first-place Milwaukee in the NL Central, tacked on five runs in the third to make it 9-1. Tyler Stephenson scored from second on Eugenio Suárez’s double. Naquin hit his 14th homer, a three-run shot off Josh Tomlin, and India added his 14th homer.

Gutiérrez, who won his fourth straight start, walked two batters in the bottom of the first, and Jorge Soler scored from second on Dansby Swanson’s bloop single to make it 1-0. Gutiérrez stranded two runners in scoring position on Adam Duvall’s groundout.

Gutiérrez (8-3) gave up one run and five hits with two walks and six strikeouts in six innings. Since losing 15-11 to the New York Mets on July 19, Gutiérrez has a 1.78 ERA over his last four starts.

Kyle Muller (2-4) allowed six runs, five hits with three walks and one strikeout in 2 1/3 innings. Snitker said Muller will be optioned to Triple-A Gwinnett and that Huascar Ynoa would likely take his spot in the rotation.

Winker, who went 3 for 4, hit his 32nd double in the sixth off Tomlin, and Kyle Farmer followed with his 11th homer to make it 11-1. Winker began the day tied for the major league lead in doubles and extra-base hits.

“As good as our offense has been, we haven’t had too many games like this, so it’s nice,” Cincinnati manager David Bell said. “Guys have been working so hard to get some results, to get some hits, the home runs, big days by several of our position players. That always helps. It’s kind of rewarding to get the home runs and the hits and all the runs.”

Ozzie Albies hit his 20th homer in the seventh, becoming the Braves’ career leader in homers by a second baseman with 80. He surpassed Dan Uggla, who hit 79 from 2011-14.

Stephenson hit his seventh homer in the ninth.

Reds: RF Nick Castellanos was held out of the lineup after getting hit by a pitch in the foot on Wednesday. “It’s a little bit swollen,” Bell said. “He had it X-rayed. There’s nothing going on there. He’ll be available to pinch-hit.”… OF Nick Senzel (knee) will play at least another game at Triple-A Louisville, but Bell indicated he might need another couple of games before he returns. Senzel is working some at shortstop in the minors.

Braves: RHP Ian Anderson (forearm inflammation) has struggled in two rehab starts at Triple-A Gwinnett, posting an 8.44 ERA and no decisions. RHP Ynoa (hand fracture) has fared even worse in three rehab starts, going 0-1 with an 8.71 ERA. “Ian, I think, struggled a little bit with his command, threw a lot of pitches,” Snitker said. “Both of them felt great. Ynoa was really good and ran out of gas in his last inning, so I heard. From what I heard, his stuff was really good.” Snitker had no immediate timetable for their returns.

“If we keep winning series, we’re going to be OK,” Snitker said. “That’s big in what we’re trying to accomplish. You’re not going to win 50 games in a row. We’re going to get beat, but we’re going to go into Washington and look to win that series.”

The Reds matched their single-game season high with homers by five different players. They also had five against Arizona on April 22 against five against the Colorado on June 11.

Braves: RHP Charlie Morton (10-4, 3.52 ERA) takes the mound as Atlanta opens a three-game series Friday at Washington. The Nationals have not yet announced a starter.