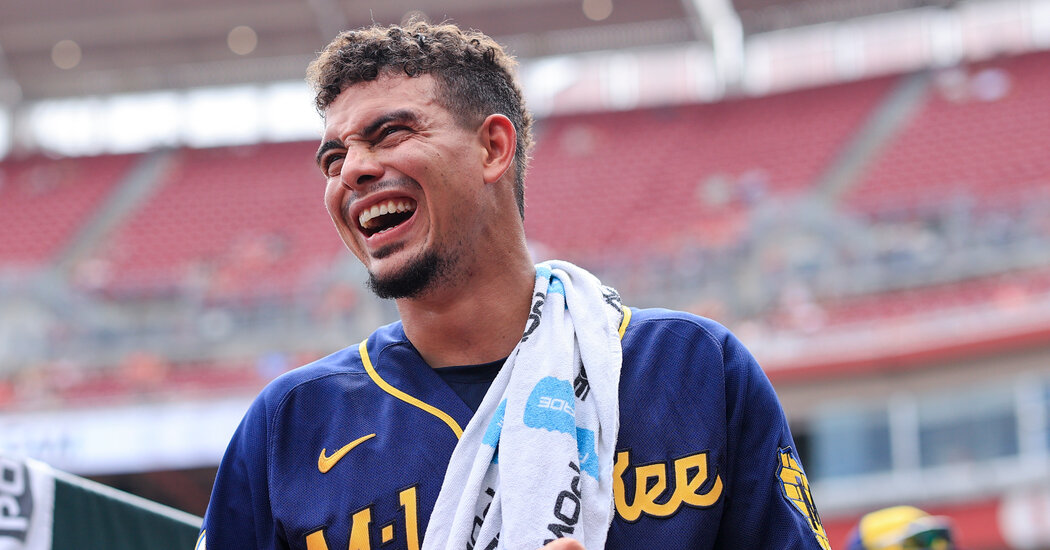 The strangest and loneliest season in major league history ended last October on a decision by Willy Adames, the new shortstop of the Milwaukee Brewers, not to swing. Adames, then with the Tampa Bay Rays, had struggled all month. In Game 6 of the World Series, with two out in the ninth inning, he took a called third strike against Julio Urias of the Los Angeles Dodgers. Season over.

“I couldn’t swing,” Adames said with a laugh on Tuesday. “I was swinging before that, and I couldn’t hit the ball anyway, so might as well just take it. He was super nasty.”

By watching Urias’s 97-mile-an-hour fastball clip the inside corner, Adames ensured a place in highlight history. But only 11,437 fans were there to see it in person because of the coronavirus pandemic, which kept fans from the ballparks except for limited crowds at two postseason series in Arlington, Texas.

Now, with stands packed again, Adames can feel what he was missing.

“The other day when we were playing the Cubs, there were 30,000-some people in the stands,” he said. “I felt like I was in the playoffs on a Monday night during the regular season. Imagine being in the World Series with the stadium packed.”

If the Brewers keep surging, Adames may not have to imagine — and he is a big reason for the team’s climb up the standings. Since joining the Brewers on May 22, after a trade the day before, Adames had helped Milwaukee to a major-league-best 30-12 record ahead of Tuesday’s rained-out game with the Mets at Citi Field.

Adames, who was acquired with reliever Trevor Richards for relievers J.P. Feyereisen and Drew Rasmussen, has led the Brewers in batting (.298), on-base plus slugging (.930), hits (45) and total bases (83) since the trade, which shifted Luis Urias — who had developed throwing problems at shortstop — to third.

Essentially, Adames transformed the season for the Brewers, who were under .500 when they got him.

“It’s hard to quantify, but he’s been enormous,” Manager Craig Counsell said. “He’s been an incredible player. The M.V.P. is now for the best statistical guy, but the impact he’s had on our team has been huge.”

The Brewers’ rise has coincided with a slide by the Chicago Cubs, who lost their 11th game in a row on Tuesday. With the Cubs and the St. Louis Cardinals slumping and the Pittsburgh Pirates rebuilding, the Cincinnati Reds could be the only viable threat in the National League Central to the Brewers, who led by six games through Monday.

It is a lesson in the benefits of acting swiftly. The Brewers got a 10-week jump on the trade market with the Adames deal, which helped them pull off another move on Tuesday, when they traded Richards and a minor leaguer to the Toronto Blue Jays for first baseman Rowdy Tellez.

“By nature, we’re a pretty transactional group, and we are trying to find incremental improvements throughout the roster whenever we can,” General Manager David Stearns said. “We do try to find a balance, but in general we’re not a sit-back-and-wait type of operation.”

Tellez will be the 52nd Brewers player this season, one shy of the franchise record set by the expansion Seattle Pilots in 1969 and matched in 2018. The Brewers had pursued Adames in the off-season, Stearns said, which gave them common ground with Tampa Bay and made it easier to deal.

“I’ve learned to never be surprised when you’re playing for David Stearns,” starter Corbin Burnes said. “He’s always got some stuff up his sleeve. Ever since I was called up in ’18, it’s been the same kind of way. If he gets his eye on a guy that he likes, he sticks with it.”

That goes for players within the organization, too, Burnes said. In 2018, when the Brewers reached the N.L. Championship Series, Burnes and his fellow pitchers Freddy Peralta and Brandon Woodruff got their first extended looks in the majors. Burnes and Peralta fell flat the next season, but both are thriving now.

With Woodruff, Burnes and closer Josh Hader, the Brewers have three All-Star pitchers for the first time in their history. Peralta could have easily joined them: He is 7-3 with a 2.23 earned run average and 12.5 strikeouts per nine innings. By developing three potential aces (Peralta was in the Rookie League when Seattle traded him to Milwaukee for Adam Lind), the Brewers could match up well in a potential postseason series.

“Anybody, whoever you want,” Adames said. “Since I got here, it’s been crazy for me to watch them do their job. Those three are something special. And when you’ve got the other guys doing great too, it’s amazing. I’m just happy to be part of it.”

Adames was hitting only .197 with the Rays, who were eager to promote the infield prospects Taylor Walls and Wander Franco. Adames was startled by the timing of he trade, he said, but glad to play home games away from Tropicana Field, where he had hit just .189 in the last three seasons.

“I was good on the road; I just couldn’t hit at the Trop,” Adames said. “After they changed the lights in ’19, it was tough for me to see the ball there. Everybody thought it was mental, but it wasn’t. I was just guessing all the time there because I couldn’t pick up the ball when I was hitting.”

Adames has also refined his swing with help from a private coach recommended by the Dodgers’ Mookie Betts; he stays inside the ball better now, he said, and can drive it up the middle and the opposite way instead of pulling lazy grounders. His revival has helped the Brewers score more runs than the average N.L. team, despite an N.L.-low .220 average.

The lack of punch is worrisome, and the Reds could make a move up in the standings with seven games in a row scheduled against the Brewers — four in Milwaukee this weekend and three in Cincinnati after the All-Star break. But with a big lead for now, teammates have told Adames how much fun he could have before actual hometown fans this October.

“They’ve been talking about how it’s crazy in the postseason,” Adames said. “From that experience against the Cubs, I feel like it would be something amazing.”