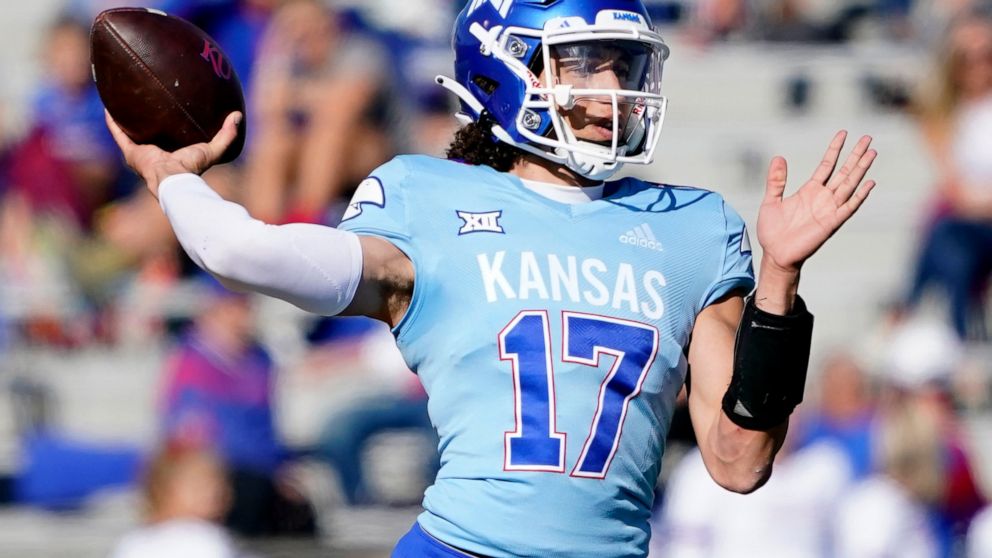 Caleb Williams has settled in as the starting quarterback at No. 3 Oklahoma

LAWRENCE, Kan — Caleb Williams is the starting quarterback at No. 3 Oklahoma. The freshman hopes to go out and be himself.

Coach Lincoln Riley put Williams in two weeks ago against Texas and he led a comeback for a 55-48 victory. After replacing Spencer Rattler, Williams has thrown for 661 yards, and has eight touchdowns.

Williams shined in his first start for the Sooners, throwing for 295 yards and four touchdowns in a 21-point win over TCU last week. He also rushed for 66 yards and a touchdown.

“We just had some down time and didn’t get on the field on Monday with this being our eighth straight game which is not that normal,” Riley said. “We’ll doing that during long stretches to reduce the time on the field, but the rest of the practices this week are very important.”

Kansas has lost its five games this season by an average of 33 points and come into this game as 38 1/2-point underdogs.

One concern for the Sooners is the secondary, where they lost cornerback D.J. Graham to an apparent head injury against TCU. Fellow corners Woodi Washington and Jeremiah Criddell are already out with injuries.

“We hope to get some of these key pieces back, which would be great,” Riley said. “We’ve had to make it work and develop depth and out guys have done a good job of that.”

Kansas will need to be much better with its passing attack to challenge Oklahoma. Jason Bean is averaging less than 100 yards per conference game in the air and has one touchdown in three Big 12 games.

“Consistency and decision making, and I know Jason isn’t happy with his performances and we’re working with him,” Kansas coach Lance Leipold said. “He has been hesitant with some things and stops trusting his training. That turns into plays we don’t want. We need to be better there.”

Miles Kendrick came in at the end of the 41-14 loss to Texas Tech on Saturday and threw two touchdowns in the final minute of the game.

“He is continuing to work hard and show flashes of what he can do,” Leipold said. “He is highly competitive and gave us something to feel decent about at the end of the game.”

The Sooners take on a Kansas team that hasn’t won a conference game in nearly two years. The Jayhawks’ last win against Oklahoma came in 1997 (20-17 in Lawrence). Oklahoma is 16-0 against Kansas since 2000.

Kennedy Brooks has been a spark on the ground for Oklahoma the past two games, rushing for 370 yards and three touchdowns.

“I think it’s been a really good year for running backs in our league,” Riley said. “Offensively, it’s the toughest position to fill and everyone across this league is running pretty well.”

Despite the 1-5 start, Kansas is one of the least penalized teams in the country. They’ve only had 27 penalties called against them all season, best in the Big 12.