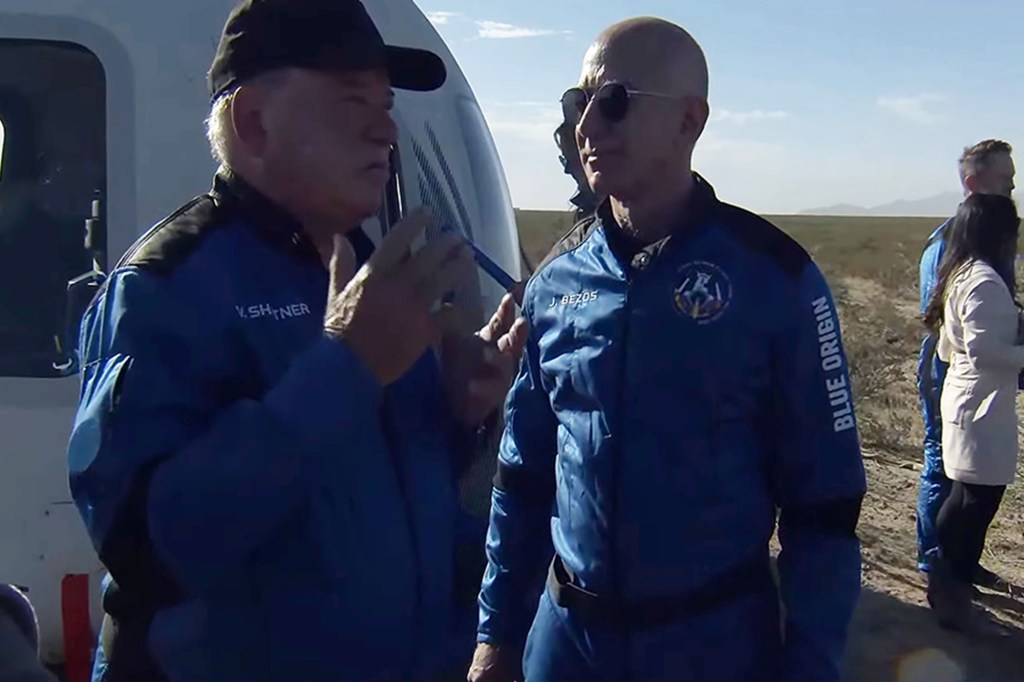 In a speech that seemed to touch on every corner of the galaxy — and beyond — Shatner, 90, mused at length on everything from how thin the air on Earth is to his own mortality — and even doled out a bit of unsolicited business advice to Bezos about turning the whole thing into a virtual reality experience.

“Everybody in the world needs to do this!” a tearful Shatner told the second-richest man in the world while others celebrated over champagne in the background.

“To see the moon come and whip by — now you’re staring into blackness — that’s the thing,” he added.

“The covering of blue, this blanket, this comforter of blue we have around us. We think, ‘Oh, that’s blue sky,’ and all of a sudden you shoot through it and you whip the sheet off you and you’re looking into blackness, into black nothingness.

“As you look down, there’s your blue down there with the black up there. There is Mother Earth and comfort and there is — is there death? I don’t know. Is that the way death is?” he asked.

“It was so moving. This experience, it’s something unbelievable.”

The weirdness of being in zero gravity was one thing, Shatner said, but he was particularly struck by the beauty of the blue that may have represented the Earth’s atmosphere.

“It’s so thin and you’re through it in an instance,” he said before asking Bezos, “How thick is it? Is it a mile?”

Bezos, who appeared caught a little off guard, replied, “The atmosphere? It depends on how you measure it. Maybe 50 miles.”

“But you’re going 2,000 miles an hour,” Shatner noted. “Suddenly you’re through the blue and you’re into black, and it’s mysterious, and it’s galaxies and things — but what you see is black. And what you see down there is light, and that’s the difference.”

Shatner suddenly turned to Bezos and grabbed his shoulders.

“You have done something — I mean whatever those other guys are doing, I don’t know about them — what you have given me is the most profound experience I can imagine. I’m so filled with emotion about what happened.

“I hope I never recover from this. I hope I can maintain what I feel now. I don’t want to ever lose it. It’s so much larger than me and life, and it hasn’t got anything to do with the little green hand or the little blue orb.

“It has nothing to do with that. It has to do with the enormity, and the quickness, and the suddenness of life and death,” he said, appearing to wipe tears from his face.

Bezos chimed in with reference to Shatner’s monologue, “It’s so beautiful.”

The indefatigable Shatner pressed on, saying he feels compelled to speak about the “vulnerability” of the planet.

“This air, which is keeping us alive. It’s so thin. It’s thinner than your skin. It’s a sliver. It’s immeasurably small when you think in terms of the universe,” he continued. “This air — Mars doesn’t have it.”

Shatner then declared, “This is now the commercial.”

“It would be so important for everybody to have that experience through one means or another. It may be that you could put it on 3D and wear the goggles,” Shatner said with a chuckle.

“I mean that certainly is a technical possibility,” Shatner insisted.

But, he acknowledged, that wouldn’t be a complete experience because users wouldn’t feel the nerves he did about potentially dying on the way up.

Social media was quickly abuzz about Shatner’s remarks, with some hailing them as poetic while others joked that he may have been stoned.

“lmao its like @WilliamShatner has his first LSD trip. Love that though,” user @Aerem_13 wrote.

“William Shatner becomes the oldest person to give a 5-minute monologue to Jeff Bezos,” @IvanTheK said.

“Not the first time Shatner was that high,” TWA2Jenny wrote.

“WILLIAM SHATNER IS SO SPACE-HIGH RN TALKING TO BEZOS HE SOUNDS LIKE HE’S PEAKING ON MOLLY HAVING A REVELATION HE’S ABOUT TO KISS JEFF I CAN’T,” @EmmaTolkin said.

Others, though, said they admired the 90-year-old astronaut and his ability to quickly process the rare experience.