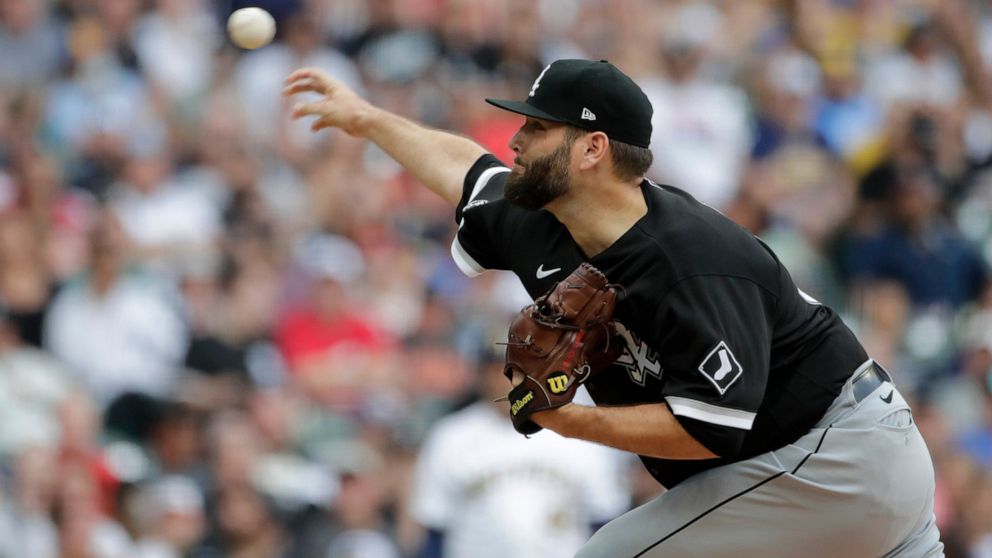 MILWAUKEE — Lance Lynn allowed one run over six innings and hit a two-run single to lift Chicago to a 3-1 victory over the Milwaukee Brewers on Sunday night as the White Sox avoided a sweep in this series between division leaders.

Lynn (10-3) allowed six hits, struck out six and walked none, outdueling Brandon Woodruff in a matchup of All-Star right-handers. Lynn, who lowered his ERA to 1.91, also keyed a decisive three-run second inning with his bat.

Michael Kopech pitched a scoreless inning for Chicago and Liam Hendricks tossed two for his 24th save in 28 chances.

Woodruff (7-5) allowed three runs on five hits in seven innings, striking out nine and walking two. His NL-best ERA climbed from 2.04 to 2.14. Woodruff has two losses and two no-decisions in his four starts in July.

The White Sox, who lead the A.L. Central by nine games, mustered just enough offense after dropping the first two games against the NL Central-leading Brewers by a combined score of 13-2.

The White Sox scored all three runs in the second with two outs. Brian Goodwin walked and Leury Garcia singled. Seby Zavala followed with an RBI single, with both runners advancing on the throw. Lynn then lofted a single into shallow right field to score two more runs.

Milwaukee made it 2-1 in the fifth when Tyrone Taylor tripled with one out and Jackie Bradley Jr. followed with an RBI double off the wall in right-center. Lynn ended the threat by striking out Woodruff and Kolten Wong.

The Brewers got their first baserunners on consecutive two-out singles by Woodruff and Wong in the third, but Lynn got Christian Yelich on a called third strike.

Milwaukee also left two aboard in the sixth and seventh innings.

White Sox: LF Eloy Jimenez, sidelined since late in spring training with a ruptured left pectoral tendon, is expected to be activated Monday and in the lineup at Kansas City, manager Tony La Russa said. LaRussa wasn’t sure if Jimenez would play LF or DH. Jimenez played in 10 consecutive games at Triple-A Charlotte through Saturday, only two as a DH.

Brewers: CF Lorenzo Cain, on the IL since June 1 with strained right hamstring, is expected to join the Brewers this week in Pittsburgh, manager Craig Counsell said. Cain was hitting .240 in eight games at Triple-A Nashville through Saturday.

Milwaukee is off Monday, then travels to Pittsburgh for three games. LHP Brett Anderson (2-5, 4.26) is scheduled to start Tuesday for Milwaukee vs. LHP Tyer Anderson (5-8, 4.35)