When will oil prices peak? Traders and analysts are rethinking their forecasts. 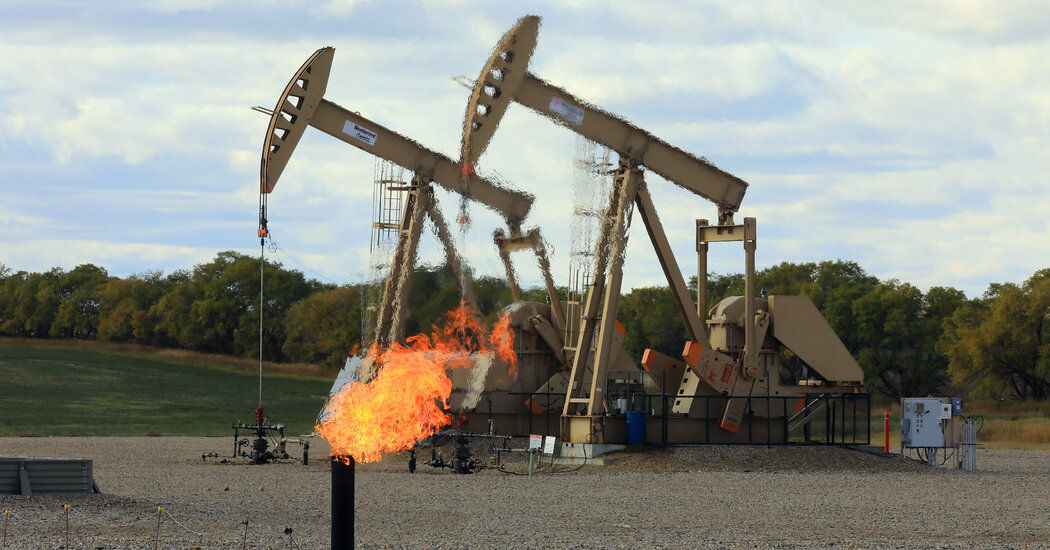 Oil prices are at seven-year highs, with the cost of West Texas Intermediate crude, the United States benchmark, up 70 percent this year, at more than $80 per barrel. It’s part of a global energy crunch that is pushing prices higher for all types of fuels, including natural gas and coal, the DealBook newsletter reports.

Many Wall Street forecasters believe oil prices are about to peak. Oil usage is up from 2020 but below what it was in 2019, when oil prices were lower than they are now. Analysts at Goldman Sachs last week predicted that the price of a barrel of oil could average $85 for the next few years.

But some traders are betting oil will rise much more. The most widely held option is one that pays out if oil rises higher than $100 a barrel by the end of December. Options trades with strike prices as high as $200 by the end of next year have also been made lately.

Who is right? The question of whether oil prices have nearly peaked or are about to rise much higher rests on what’s driving them up in the first place. Two possibilities:

Short-term, pandemic-induced disruptions: Demand for oil — like the market for many goods — is rising faster than producers can ramp up supply (or, in the case of OPEC, are willing to). If that is the case, oil prices are probably near their highs. With China’s economy slowing and the U.S. recovery hitting a weak patch, oil demand is not likely to grow very rapidly in the near future. That should give supply time to catch up, especially as pandemic disruptions fade.

A long-term mismatch between supply and demand rooted in climate change: A recent report from the International Energy Agency found that in order for countries like the United States to become carbon neutral by 2050, oil usage must peak by 2025. Yet, based on current investments, green power generation won’t be enough to supplant oil consumption until 2035. This year’s price jump could be the market’s warning sign about future energy crunches and price spikes.

The global economy’s setback from the pandemic is expected to largely stabilize by the end of next year, the Organization for Economic Cooperation and Development said Tuesday, with most major economies returning to a prepandemic growth path by 2025 at the latest.

But the rebound could be delayed if the pandemic drives a retreat from globalization, the organization said, as governments and business leaders begin to question whether global supply chains have been stretched too far. And governments must begin taking action to reduce the towering amounts of debt left behind by stimulus measures.

“Long-run scenarios assume no lingering growth effects” on the global economy beyond 2022, the organization said in a new report on the fiscal outlook through 2060. But that could turn out “to be an optimistic assumption if, for instance, the pandemic ushers in a de-globalisation trend.”

Businesses of all sizes have been facing delays, product shortages and rising costs linked to disruptions in the global supply chain. The pandemic has starkly revealed the dependence that Western nations in particular have on foreign supplies as diverse as medical equipment and semiconductors.

Policymakers in the United States, Europe and other nations are increasingly examining whether production should be brought back home to address national security and public health concerns. Such a shift, if it takes hold, could lead to a decline in labor productivity growth over time, the organization noted.

Countries are grappling with large holes in their finances as governments borrowed heavily during the pandemic from central banks and spent enormous sums to support businesses and individuals from the economic ravages of virus-induced lockdowns.

The national debt of major countries will balloon next year by as much as 25 percentage points of their gross domestic product because of pandemic-related effects, the report said. Most central banks have lent the money at ultra-low rates, so the interest payments that governments owe are manageable, assuming they are continuously rolled over, the O.E.C.D. report said.

Even so, nearly all of the 35 countries that are members of the organization, including United States and European nations, will need to rein in spending and start collecting more revenue for national coffers within the next couple of years if they are to stabilize the share of public debt over the long term, the report said.

The organization said it was not recommending that governments raise taxes to make up for all the shortfall. But the analysis in the report showed that all O.E.C.D. governments would need to raise taxes to prevent gross government debt ratios from rising over time.

And despite the financial burden brought on by emergency government spending during the pandemic, the direct fiscal impact pales in comparison to looming long-term expenses like funding pensions and health services as societies age, the organization said.

Unless governments start reducing their debt, “population aging and the rising relative price of public services will keep adding fiscal pressure onto O.E.C.D. countries in the decades ahead,” the report concluded.

At the laboratory of Tokamak Energy, in a business park outside Oxford, England, there is a warning on the public address system every 15 to 20 minutes that a test is coming and everyone should stay out of the room with the fusion device, which is 14 feet high with thick steel walls. There is a whirring sound that lasts about a second. Then a monitor shows an eerie pulsing video of the inside of the device as a powerful beam blasts into superheated gas known as a plasma.

No one knows when fusion energy will become commercially viable, but rising alarm about global warming is driving private investments. The British government even recently saw the need to issue regulations for fusion energy. READ THE ARTICLE →

Workers and organizers involved in an effort to unionize Buffalo-area Starbucks locations say the company has imported “support managers” as part of a counteroffensive intended to intimidate workers, disrupt normal operations and undermine support for the union.

Starbucks says the additional managers, along with an increase in the number of workers in stores and the arrival of a top corporate executive from out of town, are standard company practices. It says the changes, which also include temporarily shutting down stores in the area, are intended to help improve training and staffing — longstanding issues — and that they are a response not to the union campaign but to input the company solicited from employees.

“The listening sessions led to requests from partners that resulted in those actions,” said Reggie Borges, a Starbucks spokesman.

Many of the ways Starbucks has responded in Buffalo — where union backers seek to become part of Workers United, an affiliate of the giant Service Employees International Union — are typical of employers, reports Noam Scheiber, The New York Times’s labor reporter. The measures include holding meetings with employees in which company officials question the need for a third party to represent them.

But some of the company’s actions during the union campaign are unorthodox, according to labor law experts. “A huge increase in staffing, shutting down stores, it’s all unusual,” said Matthew Bodie, a law professor at St. Louis University who is a former labor board attorney.

A recent visit to a Starbucks near the airport, where workers have filed for a union election, turned up at least nine baristas behind the counter but only a handful of customers.

“It’s insane,” said Alexis Rizzo, a longtime Starbucks employee who has been a leader of the organizing campaign at the store.

Ms. Rizzo said the number of employees in the store made those who predate the union election filing feel outnumbered and demoralized. Starbucks said the additional personnel were intended to help the store after an uptick in workers who were out sick.

The prospect that Starbucks workers in Buffalo could form a union appears to reflect a recent increase in labor activism nationwide. READ THE ARTICLE →