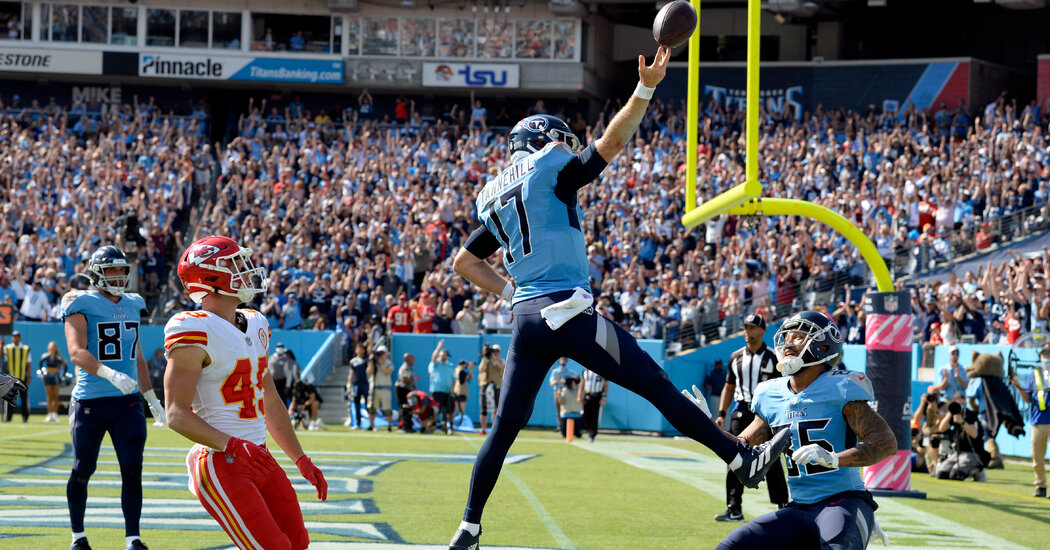 Tennessee Titans Coach Mike Vrabel could not ignore the obvious one week ago. After yet another virtuoso performance by the 247-pound freight train that is Derrick Henry bulldozing the Buffalo Bills on “Monday Night Football,” he admitted the team’s overreliance on its running back.

“We continue to jump on Derrick’s back,” Vrabel said, “and he’s willing and able to carry us.”

Yet we have also seen how far one player can take this Titans team: to the conference title game.

Looking to go further in the postseason, the Titans (5-2) acquired the Pro Bowl receiver Julio Jones in June, but began the regular season with the same old formula. Jones and A.J. Brown have not been healthy, the defense was getting gashed and quarterback Ryan Tannehill is not in anybody’s top 10. Through six games, Henry was again on a pace to set the N.F.L.’s season rushing record after falling 100 yards short in the 2020 season.

But on Sunday, Tennessee dominated Kansas City, 27-3, in a breakthrough game that showed the Titans were taking a step toward being title contenders.

There’s more to the Tennessee Titans than Derrick Henry.

Henry is special, and any offense with any dreams of hoisting the Lombardi Trophy had better feature such a game wrecker.

But this win panned a magnifying glass over the rest of Tennessee’s roster, starting with quarterback. Six of the other seven N.F.L. teams to produce a 2,000-yard running back had terrible to below average quarterbacks. The 1973 Bills (Joe Ferguson), the 1984 Rams (Jeff Kemp), the 1997 Lions (Scott Mitchell), the 2003 Ravens (Kyle Boller and Anthony Wright), the 2009 Titans (Vince Young and Kerry Collins) and the 2012 Vikings (Christian Ponder) had minimal passing threats. Eventually, it didn’t matter how good Barry Sanders or Eric Dickerson was. Defenses loaded the box, and the rushers essentially rammed into brick walls.

The one exception, of course, was the Broncos’ Terrell Davis, who had a 38-year-old John Elway at quarterback to balance out Denver’s Super Bowl run in the 1998 season.

Against Kansas City, Tannehill proved again that he is no dink-and-dunk placeholder, completing 21 of 27 passes for 270 yards with a 105.3 passer rating.

This is the best receiving corps Tannehill has had in Tennessee, too. Brown and Jones, struggling through hamstring injuries to begin the season, are starting to exploit one-on-one coverage outside. On his 24-yard touchdown reception in the first quarter on Sunday, Brown boxed out Kansas City cornerback Mike Hughes and torqued his body around at the last moment to make the catch. The drops that plagued Brown through September felt like a distant memory as he finished with eight catches on nine targets for 133 yards.

Jones isn’t close to 100 percent, but he proved on his own circus catch against Buffalo that he is not close to being finished. Tannehill completed passes to nine different players against Kansas City (3-4).

They complicate what would be simple math in Tennessee. Opponents cannot load the box to stop a 2,000-yard running back, because the Titans can turn games into breezy, backyard pitch-and-catch affairs.

It was clear in its A.F.C. championship game loss to Kansas City in the 2019 season that Tennessee, like every other team in the N.F.L., had no way of stopping Patrick Mahomes. He made a mockery of the Titans’ defense then, prancing into the end zone on a too-easy, 27-yard touchdown run that will forever loop on Mahomes’s highlight reels.

Since then, however, the Titans reset their secondary and added a Mahomes antidote in the edge rusher Bud Dupree, whom the Titans signed to a five-year, $82.5 million deal this off-season because he can single-handedly flip a game’s momentum.

Dupree tore his anterior cruciate ligament with the Steelers in December 2020, and admitted recently that he tried returning from surgery too soon. On Sunday, he looked again like a stopper worth investing in.

With Tennessee leading, 7-0, midway through the first quarter on Sunday and Kansas City facing third-and-7 from midfield, Dupree embarrassed left tackle Orlando Brown, speeding around the two-time Pro Bowler to track down Mahomes for a strip sack that forced Kansas City to punt.

Meantime, Mahomes has had to play at a ridiculously extreme pace to keep Kansas City alive, and it is proving to be unsustainable. We now know the Chiefs’ defense is bad — really bad — but the 27-point deficit Mahomes faced at halftime was the largest in his career.

He threw an interception in his sixth straight game and, on a final fourth-and-18 to end his day, he was brutally sandwiched between two Titans defenders. Jeffery Simmons, all 6 feet 4 inches and 305 pounds of him, went airborne over the top and caused Mahomes’s head to turn at an awkward angle. Mahomes cleared the concussion protocol, but, down, 27-3, Coach Andy Reid decided to keep him out of the game.

Compensating for a sieve of a defense, Mahomes has made some head-scratching decisions and is now tied for the league lead in interceptions.

On the other sideline, Henry, or King Henry, as he is sometimes called, did not need to do much, thanks to help from the other Titans. Henry even threw a touchdown pass out of the wildcat formation, and ran for only 89 yards on 29 tries (a 3.0 yards per carry average).

For one game, Henry was merely human, and the Titans were still dangerous.

Quarterback’s no man’s land is a scary place.

In the off-season, teams were acting out of desperation regarding the most important position in football. The San Francisco 49ers and the Los Angeles Rams threw away first-round picks the way Oprah Winfrey gave away cars to acquire new franchise quarterbacks.

Yet there were a few teams in win-now mode that took more half-baked approaches to the position. It cost the Carolina Panthers a mere pittance — a sixth-round pick in 2021 and second- and fourth-round picks in 2022 — for the former third overall pick Sam Darnold. The Washington Football Team signed Ryan Fitzpatrick and Taylor Heinicke on the cheap. Denver mortgaged little for Teddy Bridgewater.

Where has it left those teams? On the outside looking in.

Week 7 highlighted exactly why teams go for broke at quarterback in the spring. Trying to get by with B-minus talent does not fly.

Darnold continued to regress in a 25-3 loss to the Giants. Clearly affected by the lingering absence of running back Christian McCaffrey, the former Jet threw for a meager 111 yards and was benched. The Panthers have lost four straight.

Heinicke is fun to watch in Washington. A poor man’s version of the quarterback he idolized, Brett Favre, Heinicke sprints and dives all over the field and has come up with game-ending heroics this season. But against Green Bay, his limitations were exposed and his touchdown (and Lambeau Leap) was negated.

Taking a big swing in the off-season doesn’t always pan out. We’ll know soon if Matthew Stafford can get the Rams over the hump, but it will take years to determine if Trey Lance was worth the heavy price in San Francisco. But such swings at least give their teams a chance.

Bengals 41, Ravens 17: It’s official. The Bengals are for real. Against the same defense that stifled Chargers quarterback Justin Herbert one week ago, Joe Burrow threw for 416 yards and three touchdowns. Nearly half of that production (201 yards) went to his former college teammate, Ja’Marr Chase. This connection alone should scare everyone else in the A.F.C.

Patriots 54, Jets 13: Dates with the N.F.L.’s worst teams always seem to come at the right time for Bill Belichick’s club. After another devastating loss, the Patriots faced the hapless Jets and rolled to 31 first downs and 551 total yards. New England did not turn the ball over and punted once.

Giants 25, Panthers 3: After tearing through the soft part of their schedule early, the Panthers have come crashing back to earth. This is about as pathetic as it gets on offense in today’s N.F.L. Sam Darnold averaged 4.4 yards per pass attempt, Chuba Hubbard averaged 2.3 yards per carry and Carolina converted 2 of 15 on third downs. Against, uh, the Giants.