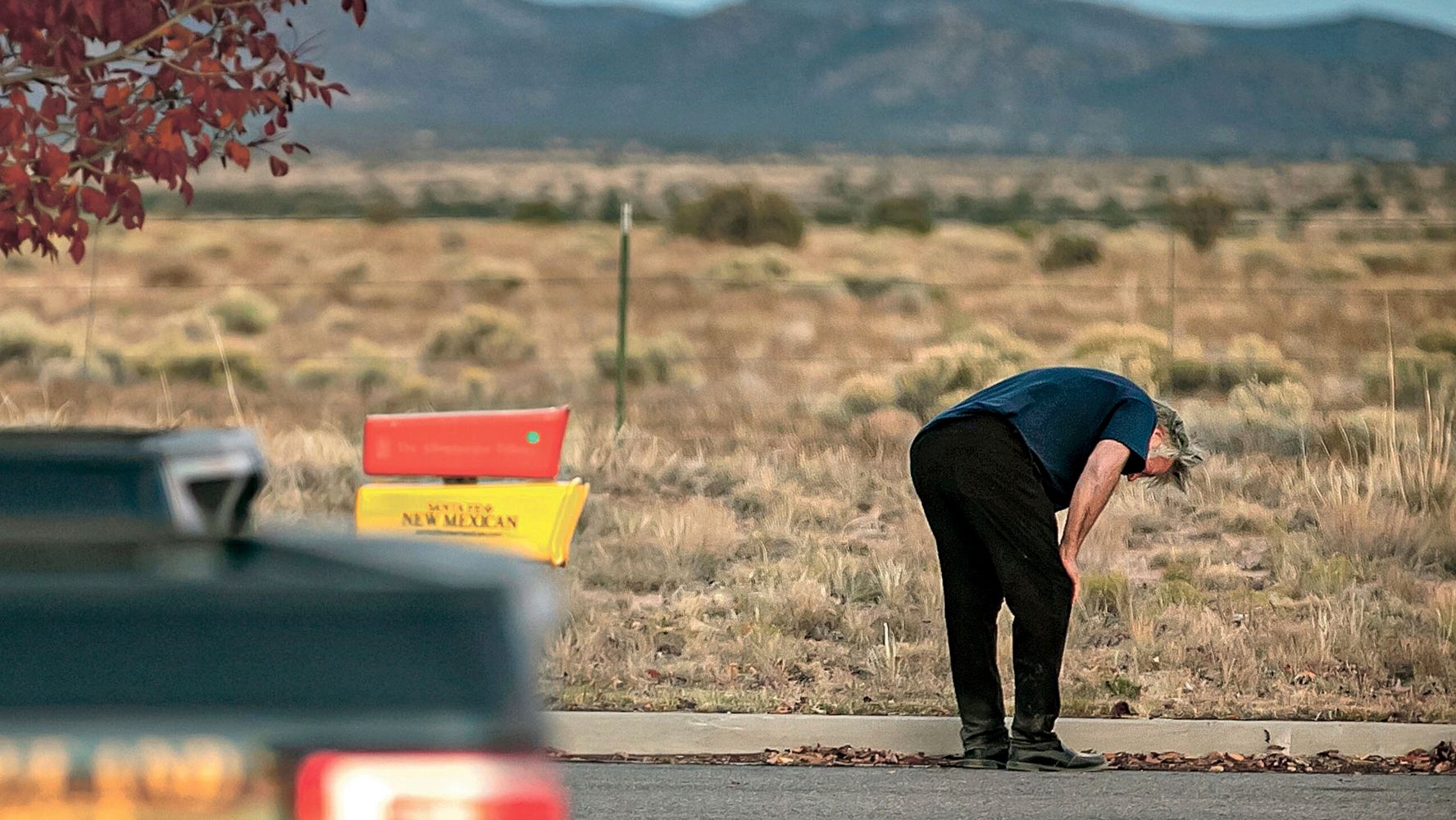 The issue of safety on the sets of Hollywood films was launched into the national conversation this week after Alec Baldwin pulled the trigger on a prop gun that killed cinematographer Halyna Hutchins while filming an indie Western, “Rust,” at a New Mexico movie ranch.

The film’s director, Joel Souza, was also hit during the incident but is recovering in a Santa Fe hospital. He said he was “gutted” by the loss of Hutchins in a statement issued to Deadline on Saturday.

“She was kind, vibrant, incredibly talented, fought for every inch, and always pushed me to be better,” the director said.

Baldwin also expressed shock, saying Friday that his “heart is broken” for Hutchins’ loved ones. He was photographed Saturday leaving a Santa Fe hotel with her husband, Matt Hutchins, and their young son, whom the actor hugged before parting ways.

Here’s what we know about what happened, how it happened, and what is being done to prevent future tragedies like it.

How did a prop gun turn deadly?

Baldwin was acting out a gunfight at the time, the Los Angeles Times reported, citing production notes that said Baldwin was supposed to back out of a church and withdraw a gun from a holster. While the film crew would normally watch the scene from a distance, the L.A. Times said, Hutchins was still lining up her next camera shot with Souza and one other person. Baldwin reportedly pulled the gun out of its holster once without incident, but the second time, it discharged.

Hutchins was hit in the chest and Souza in the shoulder. The cinematographer was airlifted by helicopter to a hospital, but died of the injury.

Many elements of the incident remain unclear, including what type of gun was used, what type of projectile hit the crew, how many projectiles there were, who had prepared the gun for use on set and whether or not that person followed safety protocols.

Weapons on movie sets are supposed to be managed by an armorer ― someone with experience handling guns who knows the difference between live ammo and blanks. Both consist of a cartridge filled with gunpowder, but a live round has a projectile on the tip, whereas a blank does not. But even blanks can be deadly if fired at close range.

One experienced prop master told CNBC that usually, for shots where an actor aims a gun directly at the camera, ballistics shields are set up between the gun and the crew, just in case.

Why were crew members unhappy on the set of “Rust”?

Unionized Hollywood workers are broadly frustrated with the state of their industry. Nearly 60,000 people affiliated with the International Alliance of Theatrical Stage Employees, Moving Picture Technicians, Artists and Allied Crafts ― or IATSE ― threatened to walk off the job earlier this week if their demands concerning their schedules, health and safety were not addressed. Their union managed to avert a strike for now, but frustrations still remain.

Several outlets have reported that at least six unionized crew members walked off the set of the film just hours before the deadly shooting in protest of working conditions. The camera crew was upset about the long commute — having believed they would be provided hotel rooms near the set — and about having to wait weeks for their paychecks.

The film has a very modest budget of $7 million.

Crucially, the workers had also reportedly voiced concerns that safety protocols were not being followed on set, according to the Los Angeles Times and The Associated Press. They were particularly alarmed because someone had allegedly fired two rounds on accident in the days leading up to Thursday’s tragedy. A third accidental discharge had taken place even earlier, according to the L.A. Times.

“There were no safety meetings. There was no assurance that it wouldn’t happen again. All they wanted to do was rush, rush, rush,” one crew member told the newspaper. A text message from a crew member before Hutchins’ death reportedly complained of the conditions: “This is super unsafe.”

A source told The Daily Beast that the armorer who was allegedly on set at the time, Hannah Gutierrez-Reed, was only 24 and lacked experience to maintain a safe environment.

Who is responsible for the incident?

Police are still investigating, and no charges have been brought.

IATSE Local 44, which covers prop masters, sent an email to members saying the “Rust” prop master was not a Local 44 member, IndieWire reported. It is not clear what kind of background the prop master had.

Baldwin did not know the prop gun contained a live round, according to records from the Santa Fe County Sheriff’s Office obtained by news outlets including The Washington Post.

An assistant director, Dave Halls, took the gun off a cart, handed it to Baldwin and yelled, “cold gun,” according to the AP. (“Cold” means that the weapon did not have live ammunition and was therefore safe.)

A record of script supervisor Mamie Mitchell’s subsequent 911 call illustrates the panic that ensued: “We had two people accidentally shot on a move set by a prop gun, we need help immediately,” she told the dispatcher. “We were rehearsing and it went off, and I ran out, we all ran out.”

Asked whether the gun fired a real bullet, Mitchell said, “I cannot tell you. We have two injuries. And this [expletive] AD [assistant director] that yelled at me at lunch, asking about revisions … He’s supposed to check the guns. He’s responsible for what happens on the set.”

An affidavit stated that the assistant director did not know the prop gun was loaded with live rounds, The New York Times reported.

The Santa Fe County Sheriff’s Office told the Times it hopes to have more information to share early next week.

Who was Halyna Hutchins?

Hutchins, 42, was born in Ukraine and grew up on a Soviet military base in the Arctic Circle, where she was “surrounded by reindeer and nuclear submarines,” according to her website. She was just starting to make a name for herself in the industry, having worked on independent films including “The Mad Hatter,” created by Armando Gutierrez, and “Archenemy,” featuring Joe Manganiello.

In 2019, she was selected as one of American Cinematographer’s rising stars.

Mitchell, the 911 caller, told the AP in an interview, “This woman is gone at the beginning of her career. She was an extraordinary, rare, very rare woman.”

Matt Hutchins, her husband, reflected on her life over social media.

“Our loss is enormous,” he wrote Saturday.

Halyna inspired us all with her passion and vision, and her legacy is too meaningful to encapsulate in words. Our loss is enormous, and we ask that the media please respect my family’s privacy as we process our grief. We thank everyone for sharing images and stories of her life. pic.twitter.com/LgEp4XVkja