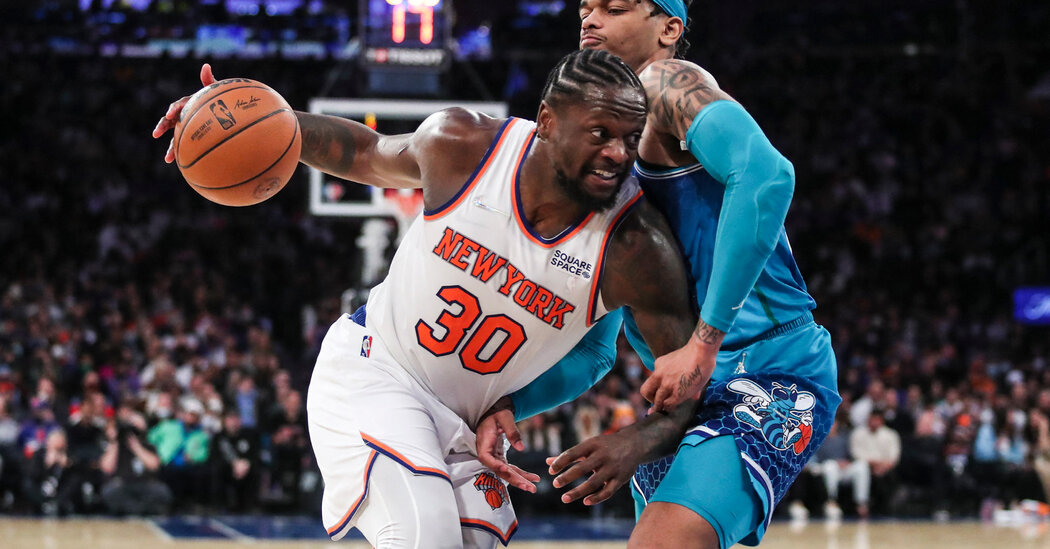 The Knicks and the Nets, as Carmine Lupertazzi Jr. of “The Sopranos” might say, are at the precipice of an enormous crossroad.

More than halfway through the 2021-22 N.B.A. season, the teams have more questions about their rosters than they were supposed to have in training camp. Both have underachieved relative to their preseason expectations. The Omicron variant of the coronavirus has affected both teams — although the Nets can claim the crown here, given that Kyrie Irving’s refusal to get vaccinated against Covid-19 has kept him off the floor the majority of the season.

But there’s a lot of hope to go around, too. The Knicks, at 22-23, have almost the same record as they did at this point last year, when they went on a dominant second-half run to surprisingly get home-court advantage in the first round of the playoffs. And they seem to have turned a corner, going 8-5 in their last 13 games. The Nets (27-16) are only a half-game behind first place in the Eastern Conference. There’s plenty of time left for both teams to rise in the standings.

Here’s a look at the questions facing the Knicks and Nets as the second half of the season gets underway.

Randle, the Knicks’ cornerstone, coming off a large contract extension, has struggled with his shooting for most of the year, which is especially problematic because he takes the most shots on the team. This is not the Randle who propelled the Knicks to a second-half resurgence last year; the one who won Most Improved Player, earned his first All-Star selection and made third-team all-N.B.A.

His struggles are baffling and partially stem from his inability to hit wide-open jumpers. Can the Knicks be one of the best teams in the N.B.A. in the second half without their best player producing at a high level? Maybe, but it’ll be exceedingly difficult to sustain that success over dozens of games — especially given the improvement in the rest of the league — unless Randle comes around, too.

2. Which RJ Barrett will the Knicks get this spring?

Barrett, now in his third year, has had one defining characteristic in a young career: He is significantly better in the second half of seasons than the first. In all three years, Barrett, 21, has shot poorly in the first half of the season, raising questions about his viability in the N.B.A.

And then at the halfway point, a switch seems to flip and Barrett looks like the budding star the Knicks hoped they drafted with the third pick in 2019. Last year, Barrett averaged 18.6 points per game and shot 43.5 percent from 3-point range after the All-Star break, up from 16.5 points per game and 35 percent. The trend is similar this year. After another slow start, Barrett has played some of the best basketball of his career. In his first eight January games, Barrett averaged 23.8 points and 6.0 rebounds per game while hitting 46.7 percent of his 3-point attempts. He’s a reliable dribble-penetrator and may currently be the Knicks’ best option on offense.

The question with Barrett has always been one of endurance: Can he keep this up? Even in this successful January stretch, he’s had at least four inefficient offensive games, including Monday’s 7-for-18 performance in the Knicks’ loss to Charlotte and a 6-for-16 outing Tuesday in a defeat to the Minnesota Timberwolves.

3. What will the rotation be for the rest of the season?

Kemba Walker was the team’s starting point guard at the beginning of the season. And then he quickly wasn’t. Except then he was, once the Knicks started to lose players to health and safety protocols. Walker played sporadically better in his brief second act before missing a stretch of games with a knee issue.

Walker, who returned to the court on Tuesday for the first time since Dec. 29, is apparently the starting point guard again. Will he stay in the rotation? Especially with Derrick Rose’s ankle injury expected to keep him out for months? Tuesday was an encouraging performance: Walker scored 19 points on 13 field goal attempts.

If not, will the rookie Quentin Grimes, who has provided a reliable scoring spark off the bench, be a fixture for the Knicks?

And whom will Coach Tom Thibodeau use to close games, especially if Evan Fournier’s struggles continue?

The Nets: To Win or Not to Win

1. When will Steve Nash stop experimenting?

Coach Steve Nash has taken a novel approach to the regular season, essentially treating wins as almost entirely irrelevant. (Good thing too: The Nets are 4-7 in their last 11 games.) He has mostly used the campaign to experiment with lineups. Players have been shuffled in and out, sometimes seemingly at random. Some of this, undoubtedly, is because of injuries and players rotating in and out of health and safety protocols related to Covid-19.

But some of the tinkering is just Nash throwing stuff at a wall. This year, the Nets have had 16 players start a game for them. David Duke Jr., an undrafted rookie, has started 13 — virtually unheard-of for a team with championship aspirations. Players like Blake Griffin and Bruce Brown, who were significant parts of the Nets’ playoff rotation last spring — have found their roles fluctuating this season.

So will Nash settle on a shorter rotation as the playoffs approach? One benefit to Nash’s approach is that with so many players getting on the court, they’ll have more experience if called upon in the postseason and they will have increased their trade value if the Nets wanted to acquire more talent at the Feb. 10 trade deadline. But continuity might be an issue.

2. What will the Nets do about Kyrie Irving?

Irving reiterated on Monday that he had no plans to receive a vaccine for Covid-19, making him ineligible for games at home, against the Knicks at Madison Square Garden, and in Toronto for the rest of the season. This puts the Nets in a bind. (Or the Nets put themselves in a bind, depending on your point of view.)

Should the Nets try to win regular season games? Or should they try to lose home-court advantage so Irving will be available for more games in the postseason? There’s the question of Kevin Durant’s injury, too. He’s expected to miss a month because of a left knee injury. Should the Nets focus on simply getting healthy instead?

There might be another option: Why don’t the Nets trade Irving? He’s still one of the best basketball players in the world. He can play almost every game for most of the league’s 30 teams. And he may enter free agency this summer anyway, especially if New York City’s vaccine mandate isn’t lifted, since he has a player option to do so. Franchises have only so many opportunities to win a title.

Why shouldn’t the Nets maximize theirs with players who will actually be able to take the floor?