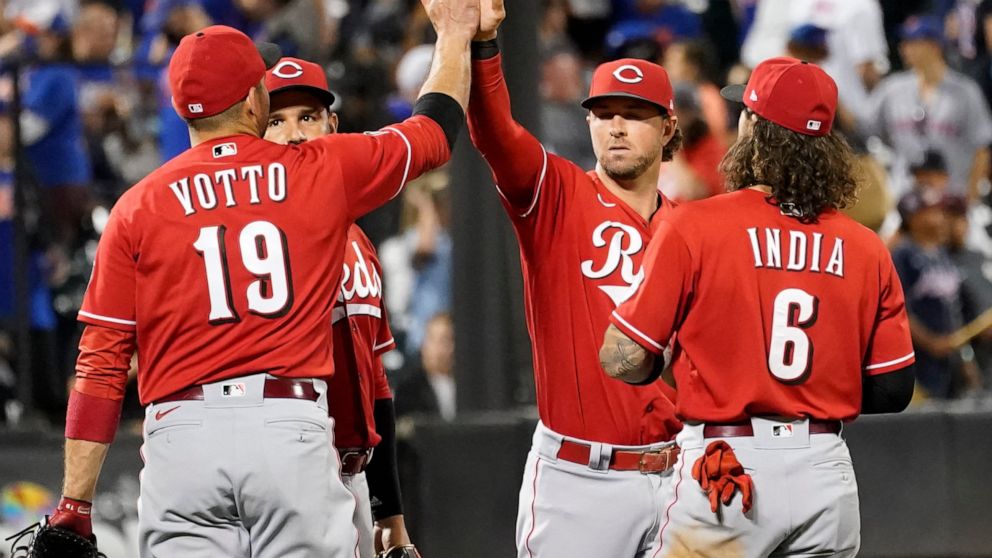 Joey Votto homered for the seventh straight game, one shy of a major league record, and the Cincinnati Reds beat the New York Mets 6-2

NEW YORK — Joey Votto homered for the seventh straight game, one shy of a major league record, and the Cincinnati Reds beat the New York Mets 6-2 on Friday night.

Jonathan India went deep twice for the Reds, including a leadoff shot that came on Carlos Carrasco’s first pitch with the Mets. Acquired from Cleveland in January, the veteran right-hander finally made his New York debut after recovering from a hamstring injury.

It was an up-and-down day for the Mets, who made a big deal to get Javier Báez from the Chicago Cubs before baseball’s trade deadline — and then revealed injured ace Jacob deGrom will be shut down for two more weeks because of inflammation in his pitching elbow, making it unlikely he’ll rejoin the NL East leaders before September.

Báez was acquired from the Cubs along with right-hander Trevor Williams for outfield prospect Pete Crow-Armstrong, the Mets’ first-round pick in the 2020 amateur draft. Báez is expected to join the Mets on Saturday and will play shortstop until injured buddy Francisco Lindor (oblique) returns.

Williams was optioned to Triple-A Syracuse but could soon be called upon by the Mets as they try to remain atop the NL East without deGrom, who was diagnosed with right arm inflammation following a bullpen session Thursday. DeGrom, who has a 1.08 ERA but hasn’t pitched since July 7, underwent an MRI which revealed no damage.

Votto’s solo homer to center field in the sixth inning extended the Reds’ lead to 3-1. The six-time All-Star and 2010 NL MVP, serenaded with chants of “Over-rated!” earlier in the evening, seemed to enjoy a leisurely trot around the bases before he flexed and pointed to the name on the back of his uniform while nearing the Cincinnati dugout.

Votto is the eighth player to homer in at least seven straight games and the first since Kendrys Morales did it for the Toronto Blue Jays in August 2018. Dale Long (1956), Don Mattingly (1987) and Ken Griffey Jr. (1993) are the only players to go deep in eight consecutive games.

Griffey and Votto were teammates with the Reds from 2007-08.

India finished with three hits and three RBIs. It was his fifth multi-hit effort in his last 11 games.

India’s homer was the only run allowed over four innings by Carrasco, who gave up three hits and one walk with four strikeouts.

Jeff McNeil laced an RBI double in the bottom of the first to extend his career-high hitting streak to 16 games. Jesse Winker put the Reds ahead with a run-scoring single in the fifth off Miguel Castro (2-3). Aristides Aquino lofted a pinch-hit sacrifice fly in the eighth before India followed with his second homer, a two-run shot.

Brandon Drury had a pinch-hit RBI double in the ninth for the Mets.

Sonny Gray (3-6) allowed the first four batters he faced to reach but gave up just one run on five hits and one walk with seven strikeouts in six innings.

The Mets wore their black uniforms — popularized in the late 1990s — for the first time since 2012. Prior to first pitch, a montage of highlights of the Mets in black uniforms — including shots from the 2000 National League pennant-winning celebration — aired as AC/DC’s “Back In Black” blasted from the loudspeakers.

India has reached base 53 times in 24 games this month. It’s the second straight month in which he’s reached base at least 50 times. Prior to this season, only two Reds rookies reached base 50 times in a calendar month — Chris Sabo in June 1988 and Adam Dunn in August 2001.

Reds: INF Mike Moustakas (bruised right heel) and OF Nick Senzel (left knee) began rehab stints with Triple-A Louisville. Both will likely need at least a week at Louisville before returning to the Reds. Moustakas last played May 18, one day after Senzel’s most recent game. … RHP/OF Michael Lorenzen (right hamstring) was activated from the 10-day injured list and pitched a perfect seventh.

Mets: Lindor (right oblique) took grounders for a second straight day. … RHP Noah Syndergaard (Tommy John surgery) threw in the outfield, three days after his first bullpen session since he was shut down May 25.

Mets: LHP Rich Hill (6-4, 3.95) will make his second start for New York following his acquisition from the Tampa Bay Rays on July 23.