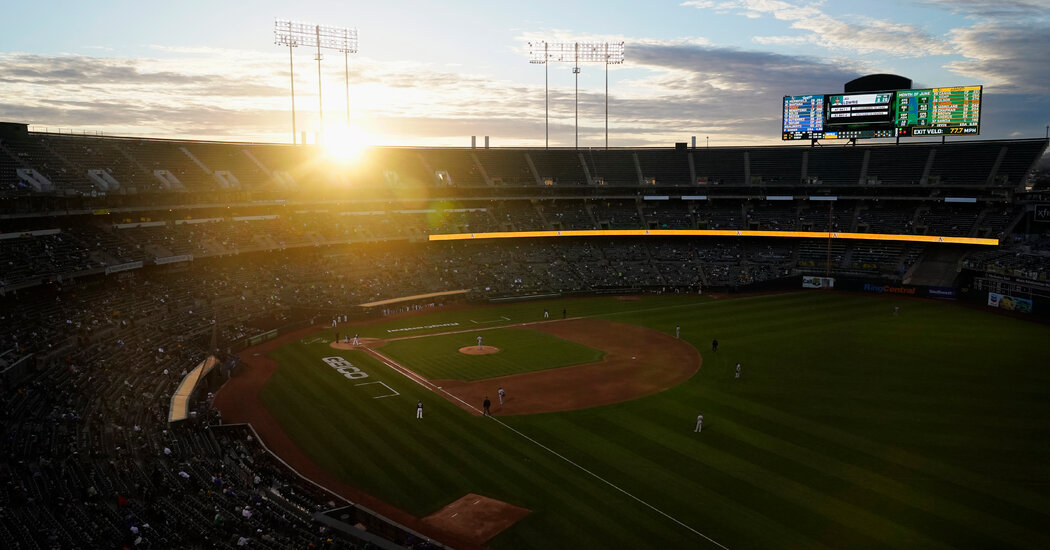 The Athletics were restless at the end of their 54th season in town. The franchise had been unstable for years in its two-team market. Relocation seemed inevitable, and to stand against it, a prominent columnist wrote, would “compound a dismal mess, prolonging a state of chaos.”

That was how Red Smith, the Hall of Fame baseball writer, put it in 1954, when the A’s reached the end of their run in Philadelphia. Now, in Oakland, it’s the same old story. As they start the second half of their 54th season in California, the A’s might be as good as gone.

On Tuesday, the Oakland City Council will vote on the team’s term sheet for financing a $12 billion project that would include a new downtown ballpark at Howard Terminal. A yes vote is not binding, because an environmental impact report would still have to be approved in the fall. But a no vote would kill it and signal the end for the Athletics in Oakland.

“If they don’t approve it, it’s over,” Dave Kaval, the team president, said in an interview Friday. “Because basically they’ve had an opportunity to look at all the different facts and understand, ‘Does this make sense?’ We’re hopeful that it’s a yes, but with these things, it’s hard to say. We remain apart.”

The Athletics have been desperate for years to leave the antiquated Coliseum, which opened for mixed use in 1966 and has been the team’s home since 1968. Their lease expires in 2024, so they would not leave immediately. If they go, they would most likely wind up in the same metropolitan area that lured their former co-tenants in the Coliseum, the Raiders, with a new football stadium: Las Vegas.

Major League Baseball has given the A’s permission to explore options in Las Vegas, which is also home to the N.H.L.’s Golden Knights. Club officials have made several visits to the city, which would fit geographically into the American League West.

“Thinking of this as a bluff is a mistake,” Commissioner Rob Manfred said at the All-Star Game last Tuesday. “This is the decision point for Oakland.”

The A’s insist they will not build a new stadium at the Coliseum site, in an industrial area near the airport, beside Interstate 880. They failed in an effort to build near Laney College in Oakland, and the San Francisco Giants used their territorial rights to block the A’s from moving to San Jose. No such problems exist in the Nevada desert.

“It’s just a different business climate,” Kaval said. “One, there’s just a lot more sites because there’s a lot more land that hasn’t been developed. So I think you’d have that as a baseline. Two, you have a lot of people who are very interested in baseball there because it would bring a lot of tourists and really improve the local economy and generate a lot of tax dollars and economic activity.”

Kaval added: “Things like a public-private partnership that they did with the Raiders to help finance that, or even understanding the best locations for the land or partnering with the resorts and casinos, those are all things that they’re very comfortable doing. So they’ve been pretty aggressive.”

Las Vegas would be the fourth home for the Athletics, who spent a 13-year interlude in Kansas City before landing in Oakland. Only one team — the Montreal Expos, who became the Washington Nationals in 2005 — has changed markets since 1972, but M.L.B. is eager to expand, and the A’s have become a persistent roadblock.

The league has not expanded since 1998, and Manfred has repeatedly said that the sport cannot do so again until the stadium questions in Oakland and Tampa Bay have been resolved. The Rays, who were added in 1998 along with the Arizona Diamondbacks, are locked into their lease at Tropicana Field in St. Petersburg, Fla., through 2027, which pushes decisions about their future off a few years. But moving the A’s — to a new ballpark in Oakland or to a new city — would be a first step.

“John Fisher and M.L.B. have done everything humanly possible to get a stadium built in Oakland,” Manfred said, referring to the Athletics’ owner. “At the point in time that you come to the conclusion that you can’t get it done, whether you like the market or not, you have to find someplace else to play because you need a facility. It’s that simple.”

Fisher, a billionaire whose family founded the Gap clothing stores, has consistently kept the franchise in the bottom third of M.L.B. payrolls. The A’s have been largely successful anyway, thanks to a front office led by Billy Beane and David Forst, but they have grown weary of playing in the shadow of the Giants’ shimmering ballpark, which opened in 2000 beside Mission Bay.

“Before it was built, I used to go on runs down at the waterfront and there was nothing there,” Kaval said of the Giants’ park. “It’s very similar to the Oakland waterfront. And now, a generation later, you have this beautiful baseball park, you have an arena, you have a hospital, you have thousands of units of housing, including affordable housing. It’s completely transformed the energy of that part of the city. So we’re trying to duplicate what’s worked before.”

The A’s plan to privately finance the building of their stadium, as the Giants did, and Manfred said Fisher had pledged “well over $1 billion.” But the sides have still not agreed on financing for off-site infrastructure improvements, and Kaval rejected a term sheet proposed by the city on Friday.

“We could change some things around the edges,” Kaval said, but added, “They can’t vote yes on something we didn’t agree to and say they had a yes vote.”

Some Asian American community leaders have opposed the project, fearing traffic problems in nearby Chinatown, and Kaval acknowledged that some council members had a different vision for Howard Terminal. The team’s ambitious proposal may not work for everyone.

“And that’s fine; they have to decide what they want,” Kaval said. “But we just need to know. We can’t keep going sideways.”