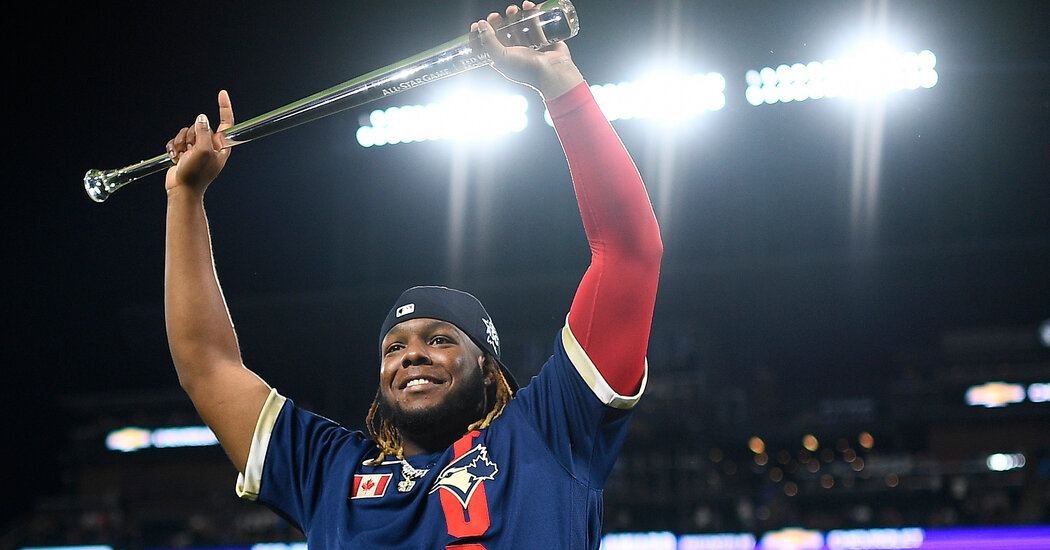 DENVER — From the moment he was born in 1999, the year of his father’s first All-Star selection, Vladimir Guerrero Jr. was bound to be noticed. When he signed with the Toronto Blue Jays at 16 years old, the spotlight burned brighter.

“There was some hype around him, purely name-based,” said Chicago White Sox closer Liam Hendriks, who played for Toronto when Guerrero turned pro. “And then he came up and took batting practice — and at 16, that was something special.”

On Tuesday night at Coors Field, Guerrero ascended from prodigy to fully formed superstar. With a towering homer and a run-scoring grounder, Guerrero won an award that eluded his Hall of Fame father: most valuable player of the All-Star Game.

The American League won, 5-2, for its eighth victory in a row and 20th in the last 24 All-Star Games. The night had an international flair: the winning pitcher, Shohei Ohtani of the Los Angeles Angels, is Japanese; Hendriks, who got the save, is Australian; and Guerrero is Dominican by way of Canada, where he was born while his father played for the Montreal Expos.

“We’re looking at, now, a world game,” Hendriks said, adding later, “Shohei is a walking billboard that is hopefully going to get more Japanese guys coming over and coming over earlier.”

Several veterans declined to attend this year’s event despite being healthy enough to play for their teams: Jose Altuve of the Houston Astros, Mookie Betts of the Los Angeles Dodgers, Jacob deGrom of the Mets and others. Against that backdrop, Ohtani stood out as an especially good sport, eagerly taking part in the Home Run Derby on Monday, and then serving as the A.L.’s starting pitcher and designated hitter on Tuesday.

He led off the game with a ground out to second — the N.L. played in a shift, even for an exhibition — and then retired the side in order in the bottom of the first on a fly out and two ground outs. Ohtani took one more at-bat, grounding out to first base, and then relaxed at last.

“Definitely it was a lot more tiring compared to the regular season, but if everyone had fun, I’m all good with that,” Ohtani said through an interpreter, adding later, “If more people are watching baseball, that makes me happy. That’s good for the sport.”

Ohtani did not win an award, did not register a strikeout and did not reach base. But he blasted a ball 500 feet in the Home Run Derby and pitched a ball 100 miles an hour in the game, a mind-bending mix of skills.

“He’s out of this world,” Guerrero said through an interpreter. “He’s not from here. He’s unbelievable, I don’t even know what to say. Pitch, hit, unbelievable.”

Guerrero is having his own enchanted season, leading the majors in average (.332), on-base percentage (.430) and runs batted in (73), to go with 28 homers. He and Ohtani were among the record 42 first-time All-Stars here, and after a pregame tribute for Hank Aaron — whose widow, Billye, was escorted to the field by Aaron Judge and Freddie Freeman — the game heralded a future led by players like Guerrero, Fernando Tatis Jr. and Juan Soto, who are all just 22 years old.

“The thing is, they are very excitable, but they are very curious,” said the Dodgers’ Dave Roberts, who managed the N.L. team. “They are what this game is about and what this game will be about for the next decade. For me, as a guy that’s been around for a bit, you have to embrace that. That youthful energy is fantastic.”

Guerrero’s night could have taken a darker turn in the top of the first, when he scorched a ball just past the head of starter Max Scherzer. Second baseman Adam Frazier fielded it and threw out Guerrero, who then wrapped Scherzer in a hug. On Monday, Scherzer had told Guerrero to go easy on him.

“I’m alive and I didn’t get hit by the ball — that’s my success story,” Scherzer told reporters, adding, “I’m just grateful I still have a blue eye and a brown eye.”

Guerrero pointed skyward after his third-inning homer, which landed deep in the left-center field bleachers off a hanging slider from Milwaukee’s Corbin Burnes, who took the loss. Guerrero had told some Blue Jays teammates that he would win the M.V.P., but they could have predicted that, anyway.

“When he hit it, it was kind of like, ‘There it was, we were waiting for it,’” said Blue Jays shortstop Bo Bichette. “And then how far he hit it, that’s not really surprising either. He’s amazing. Big stages, he always does it.”

There were more highlights to follow — Guerrero’s R.B.I. ground out in the fifth extended the A.L. lead to 3-0; the Rays’ Mike Zunino drilled an opposite-field, second-deck homer in the sixth; and the Angels’ Jared Walsh, playing left field for the first time in the majors, made a sliding catch to end the eighth with the bases loaded.

But the M.V.P. was Guerrero’s all the way, a fitting capper for the player who received the most votes from fans. The kid who tagged along with his father to the All-Star Game is now the youngest M.V.P. in the game’s history.

“Dreams come true,” Guerrero said. “Since I was a kid I was thinking about this moment; worked all my life, very hard. Thank God it’s happening right now.”