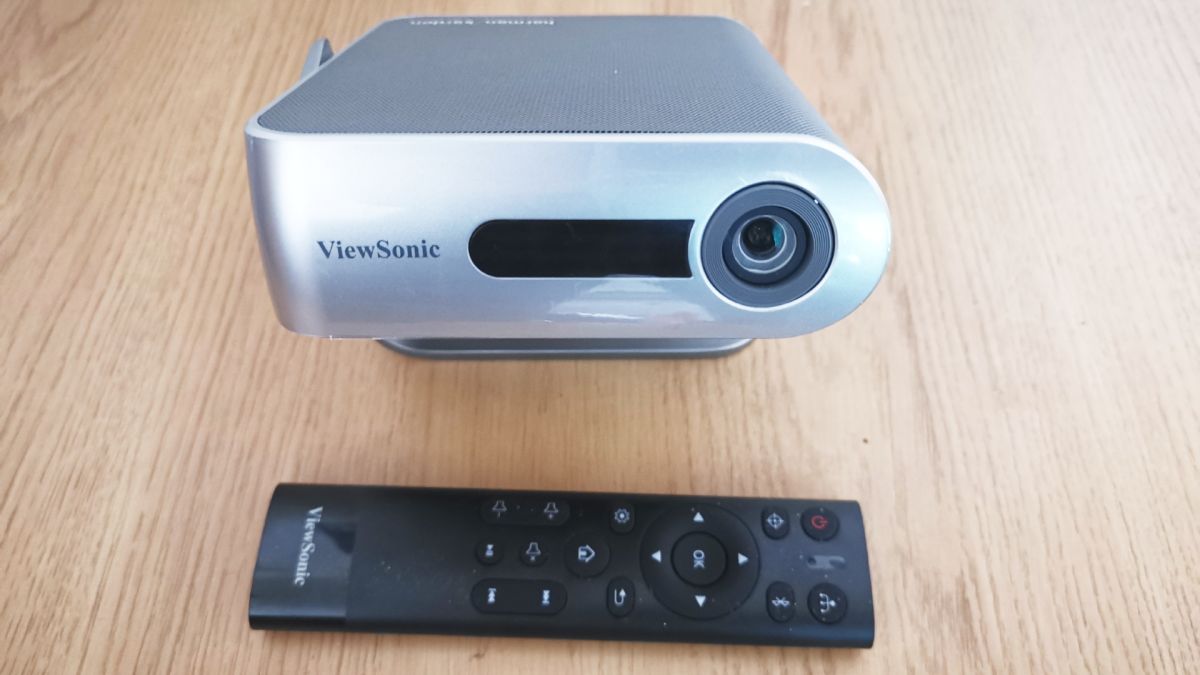 The Viewsonic M1+ is a compact, portable projector capable of up to 1080p Full HD resolution. In terms of price, it’s much more affordable than larger 4K capable beamers, and as such we can recommend it for first-time projector buyers curious about what the M1+ can offer over a traditional TV setup.

The most immediately striking aspect of the M1+ is its size. This projector is marvelously portable, and the 360-degree stand means you can place it just about anywhere. The device itself also features a battery indicator, so you’ll know exactly when to charge. One drawback to the size, though, is the limited number of buttons on the device, so options like playback, navigation and volume control are best handled on the included remote instead.

That being said, it’s important to recognize the M1+’s drawbacks. The projector’s built-in open source app store, Aptoide, is severely lacking in apps, with many popular entertainment and music staples missing entirely. The projector also doesn’t work well in brightly lit environments, which is pretty common for mini projectors like these, but something to keep in mind all the same.

However, these issues shouldn’t detract you from the qualities that the M1+ does provide. It boasts solid, distortion-free sound at high volumes, impressive for such a small projector. On top of that, image quality is also very good and shows up crisply in dark environments, though there are some issues with small text appearing quite fuzzy, even after adjusting the manual focus. This could be something to bear in mind if you often watch films and shows with subtitles.

The M1+ is available worldwide, though the price tag varies depending on your region. You can pick up a Viewsonic M1+ projector for yourself right now for $309 / £315 / AU$569.

The Viewsonic M1+ is more affordable than other similar 1080p projectors, such as the XGIMI Halo, which retails at $799 / £729 / AU$1,399. The Viewsonic M1+ is an older model, but that’s by no means a bad thing on its own. You’re getting a very capable portable projector for its price, especially given its solid performance.

The Viewsonic M1+ is impressively tiny, measuring just 5.7 x 1.6 x 5 inches (14.6 x 4 x 12.6 cm). The stylish, rounded design of the projector doesn’t hamper its functionality, either. The 360-degree stand is able to swivel around the device without issue, allowing you to easily place it based on your preference.

The panel on the more rounded side of the projector opens up to reveal a host of ports for connectivity options. Here you’ll find a microSD slot and HDMI 1.4 for those who prefer to watch movies and shows through external devices (and trust me, you will, but more on that later).

There’s a power port for charging, as well as USB-C and USB-A slots, so there’s something for almost every type of connection you could want from a 1080p projector.

We also need to talk about the Viewsonic M1+’s built-in app store. Aptoide is an Android-based open source platform that, put simply, is far too basic to be worth your time. While it does feature a Netflix app (oddly hard to come by for projectors), there are many bizarre omissions that will make you want to connect the M1+ to another device.

Some of the most popular streaming apps like Apple TV Plus, HBO Max and Disney Plus are no-shows, for example. And while Aptoide does host Amazon Prime Video, BBC Sport and Spotify Connect, the variety of entertainment on offer to you is technically wide, but the selection has all the depth of a puddle.

You may want to make use of the Spotify Connect app, though, as the M1+ features surprisingly good audio quality for its pair of 3W internal speakers. Despite its size and low wattage, we were impressed with the projector’s ability to adequately output clear sound, all without sounding distorted or weighing too heavily in any one profile.

Sure, it’s not quite as loud, bassy or high quality as a soundbar like the similarly affordable Samsung S40T, but even at high volumes the M1+ delivers clear and serviceable sound.

But let’s touch on the M1+’s battery life, which isn’t stellar. You’ll get up to six hours off a full charge when the device is unplugged. However, if you want all of those six hours, you’ll have to operate in battery saving mode which will dim the overall brightness of the picture quite significantly, from the regular 300 lumens under normal power consumption to roughly half of that. Did we mention the M1+ isn’t very good for bright environments?

If you can, we recommend keeping the M1+ plugged in for home use, which does somewhat defeat the object of the projector’s portability. If you must use the device wirelessly, though, further charge can be granted via an external power bank, and there’s a handy battery indicator on the back of the projector visualized by a row of LEDs.

The Viewsonic M1+’s overall picture quality is good. While the beamer can project up to 1080p resolution, it also renders 720p and standard definition with great clarity. If you watch a lot of YouTube for example – where 1080p is arguably the most common video quality setting – then the M1+ is good enough to become your primary source of doing just that.

The projector performs admirably with movies, too. One example we tested is The Lego Movie 2, which features a colorful, striking and fast-paced visual style. The M1+ was able to keep up with the action and render even the most intensive scenes without excessive blurring or loss of overall quality.

At the other end of the spectrum, movies with much bleaker palettes like Oldboy and John Wick showed up clearly in a dark environment. But once again, movies such as these are best left in such a lighting condition, as brighter light sources have a significant negative impact on the clarity of the picture.

Issues arise when it comes to small text, too. Even when adjusting the manual focus slider, small blocks of text were hard to make out with the pixels of the text bleeding into each other. If you watch a lot of subtitled movies and shows (or if subtitles are vital to you as an accessibility feature) be warned that you may often have to squint to make out the words on-screen.

At just 300 lumens, the M1+ also performs poorly in bright environments. We got the best results from the projector in a darkened room with little to no light sources beyond the beamer itself. Darker environments are where the projector absolutely thrives, though, and you won’t be disappointed in its performance under such conditions.

Should I buy the Viewsonic M1+?

You want bang for your buckThe M1+ is an affordable choice if you’re looking to buy a 1080p-capable projector on a tight budget. The great sound and picture quality alone make it so that you’ll certainly get your money’s worth.

Portability is a key selling point for youThe M1+ is delightfully tiny, so much so that it can be placed and moved pretty much anywhere with little to no hassle.

You want a gaming projectorMaxing out at 1080p, the M1+ isn’t really designed to display the 1440p and 4K resolutions of current-gen machines like the PS5 and Xbox Series X. You’d be better suited paying more for a bespoke gaming projector if this is something you’re interested in.

Portability is your only optionWith a lacking built-in app store and relatively poor battery life, the M1+ ironically isn’t greatly suited for portable use. You’ll get more out of the M1+ if you’re able to plug it into the mains, or to another device via HDMI.