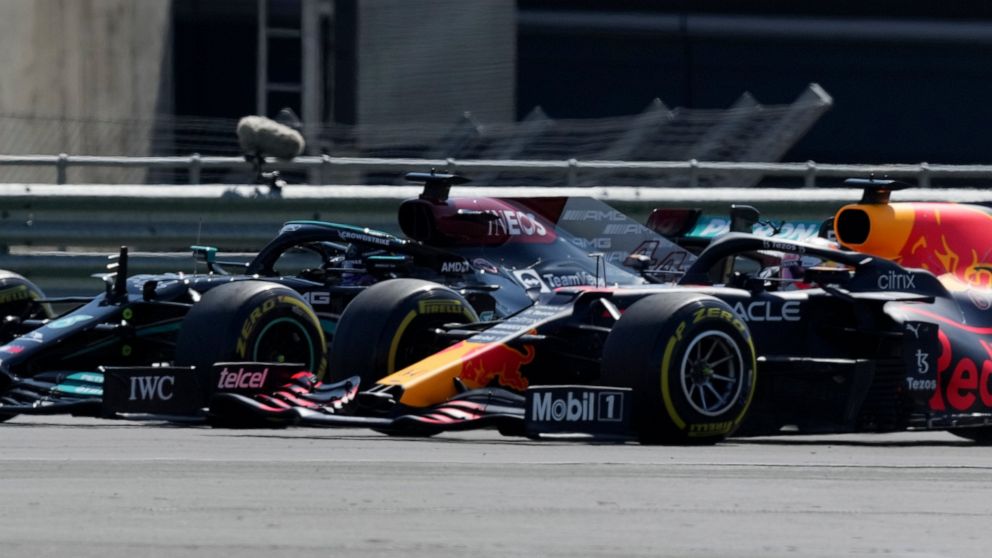 SILVERSTONE, England — Formula One championship leader Max Verstappen crashed out of the British Grand Prix when a spirited first lap battle with Lewis Hamilton sent the Dutchman spinning hard into a barrier.

The race was red-flagged Sunday for the tire barrier to be repaired and Hamilton was dealt a 10-second penalty for making contact with Verstappen.

The seven-time world champion had no reaction on his radio when Mercedes informed Hamilton of the penalty.

Verstappen beat Hamilton at the start for the second day in a row at Silverstone and the two title contenders furiously zigzagged for position. The drivers touched at least twice as Hamilton tried to slip past Verstappen for the lead.

Hamilton’s front wheel touched Verstappen’s rear wheel the second time the drivers made contact, and the Red Bull careened off course, through the gravel and into the tire barrier. A tire from Verstappen’s car bounced off the car during the spin.

Verstappen was slow to get out of his car but waved to the crowd as he headed to the medical center. Red Bull head Christian Horner said Verstappen was being held 30 minutes for observation.

Hamilton said after Saturday’s historic sprint qualifying race the key to stopping Verstappen was getting the lead from him at the start of the race. But Verstappen once again was too fast at lights out and pulled to the front.

The crowd roared as local favorite Hamilton looked inside of Verstappen, then outside, trying desperately to get around his rival until the contact ended the battle. Charles Leclerc in a Ferrari took over the lead and Mercedes boss Toto Wolff sprinted to race control to argue against any penalty to his driver.

Hamilton told his Mercedes team the position in the corner was his and he was not to blame.

“I was ahead going in there, man,” Hamilton radioed. “I was fully alongside him, my line. Yeah, he turned in on me, man”

“That’s an enormous accident and it was 100% Max’s corner,” Horner told race control. “As far as I’m concerned, full blame lies on Hamilton. You could have had a massive accident and thank God he walks away unscathed. I hope you are going to deal with it properly.”

Verstappen had won three consecutive races headed into the British GP and started from the pole for the fourth consecutive grand prix. He holds a 33-point lead in the standings over Hamilton, who has not won since May 9.