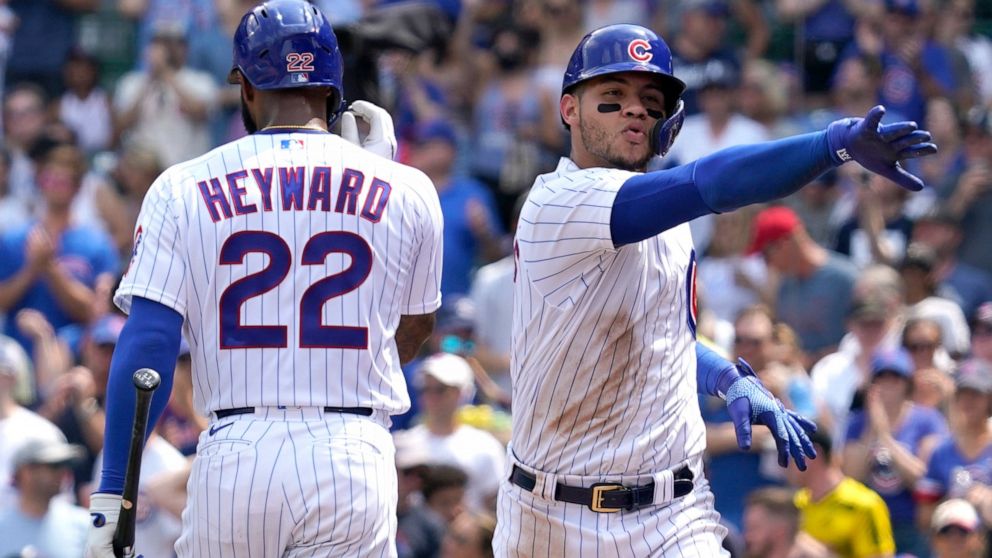 Daulton Varsho homered in his third straight game and hit a tiebreaking single in a three-run seventh inning, leading the Arizona Diamondbacks over the struggling Chicago Cubs 7-3

CHICAGO — Daulton Varsho homered in his third straight game and hit a tiebreaking single in a three-run seventh inning, leading the Arizona Diamondbacks over the struggling Chicago Cubs 7-3 on Saturday.

The teams waited out a 1-hour, 39-minute rain delay after the top of the ninth on a mostly sunny and steamy afternoon. By then, the Cubs were well on their way to their 18th loss in 24 games, a startling freefall that began with them tied with Milwaukee for the NL Central lead.

They came into this one nine back of the first-place Brewers and facing huge questions about the direction of the club as the non-waiver deadline approaches on Friday. Stars Kris Bryant, Anthony Rizzo and Javier Báez have expiring contracts, and closer Craig Kimbrel could be attractive for a contender.

Chicago grabbed the lead when pitcher Alec Mills doubled and scored on a double play in the third. Willson Contreras made it 2-0 with an opposite-field shot to right leading off the fourth against Merrill Kelly. But things fizzled for the Cubs after that.

Varsho tied it with a two-run drive against Mills in the fifth, his fourth homer. He singled in the go-ahead run in the seventh after former Diamondbacks reliever Andrew Chafin (0-2) walked the first two batters, and Asdrúbal Cabrera drove in two more with a double, making it 5-2

Pinch hitter Andrew Young added a two-run homer in the ninth. Fans were urged to seek shelter and players left the field prior to the bottom half because of storms in the area as the grounds crew raced to get the tarp on the field.

Once the game resumed, Rizzo doubled off the center-field wall against Brett de Geus. He moved up on a fly and scored on a wild pitch before pinch hitter Jake Marisnick struck out.

Contreras then charged out of the dugout after Jason Heyward took a strike and was ejected by plate umpire Pat Hoberg. Heyward singled, and Nico Hoerner struck out to end the game.

Kelly (7-7), who is 5-0 in his past seven starts, allowed two runs and five hits in six innings after beating Chicago on Sunday. He struck out six and walked one, helping the Diamondbacks win for the fifth time in six games.

The 32-year-old right-hander spent part of his childhood living in suburban Lake Forest. His father Tom was general manager of the Ritz-Carlton Chicago.

Diamondbacks: Placed INF/OF Josh Rojas (dislocated left pinkie) on the 10-day injured list and reinstated INF Cabrera (strained right hamstring). Manager Torey Lovullo said the joint on Rojas’ finger “was not comprised” and is “very stable.” He thinks Rojas could return within two weeks. Cabrera, an All-Star with Cleveland in 2011 and 2012, had been sidelined since July 9.

The three-game series wraps up with RHP Trevor Williams (3-2, 5.68 ERA) starting for the Cubs and LHP Caleb Smith (3-6, 4.38) getting the ball for the Diamondbacks. Williams is set to make his second start and third appearance since May 26. He had been sidelined just more than a month because of appendicitis. Smith pitched into the seventh last week in a win over Pittsburgh.