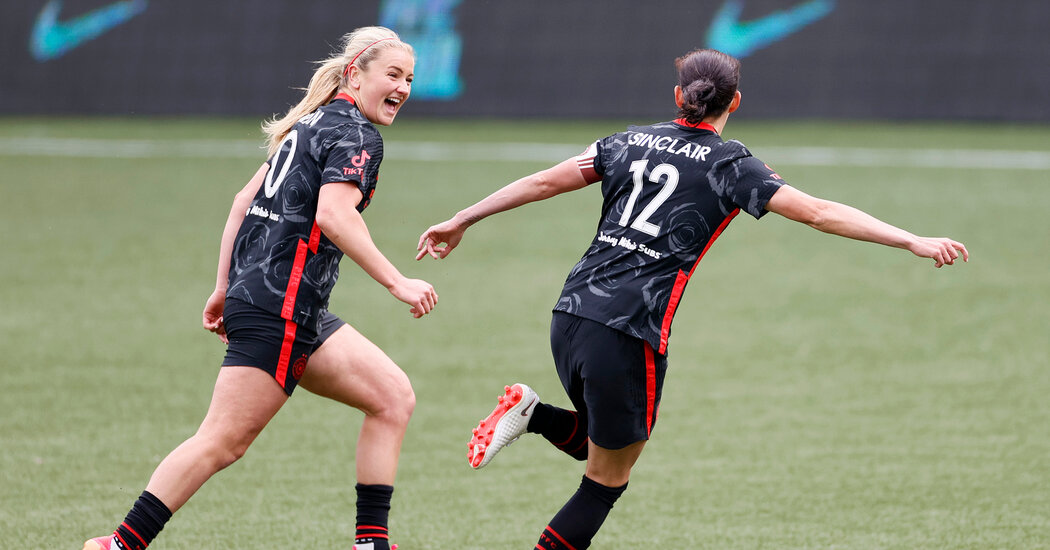 It’s 80 degrees Fahrenheit and steamy out here at Ibaraki Kashima Stadium, another beautiful venue, another sea of empty seats.

Reminder that the United States is roughly two feet, in the aggregate, from being one of the highest-scoring teams in the Olympic tournament.

Canada forward Janine Beckie and United States defender Abby Dahlkemper may collide quite a bit on Monday, but that is hardly new.

Beckie and Dahlkemper play for the English club Manchester City, which until recently also employed Sam Mewis and Rose Lavelle. That was until Lavelle joined OL Reign of the National Women’s Soccer League, where her teammates now include Megan Rapinoe and Canada’s Quinn.

But there’s more. Becky Sauerbrunn, Crystal Dunn, Lindsey Horan and Adrianna Franch, all of the United States, are teammates on the Portland Thorns with Canada’s captain, Christine Sinclair. Canada’s Kailen Sheridan plays with Carli Lloyd in New Jersey, and Erin McLeod is teammates with Alex Morgan in Orlando. Kadeisha Buchanan is a star at Olympique Lyonnais Féminin. But so is Catarina Macario.

On and on it goes.

There are so many connections between the players on the American and Canadian teams, in fact, that it would take a while to find a single player from one side who hasn’t played — at a college, at a club, in a city — with someone on the other side today.

Even their clubs teams are torn.

Kristie and Jane meeting Nichelle, Chappy and Sophie in the semifinal?

…We hope everyone has fun 🙃

That means there will be a lot of friendships on the field today, but also a lot of inside knowledge. Tendencies and favorite moves, but also triggers, too.

International soccer routinely puts such relationships under tension, and never more so than today. So expect some handshakes before and after, and some hard tackles in between.

No one wants to go home to the N.W.S.L. and hear about a loss for the rest of the year.

Canada sends out the same starting XI that faced Brazil in the quarterfinals. Bev Priestman channeling Norman Dale here: “My team’s on the floor.”

The United States has made three changes from the lineup it sent out to face the Netherlands in the quarterfinals: Alex Morgan replaces Carli Lloyd up front, Rose Lavelle swaps in for Sam Mewis in midfield, and Tierna Davidson partners with Becky Sauerbrunn in central defense, with Abby Dahlkemper giving way.

On their face, the changes feel like part of the rotation that the team has employed throughout the tournament. But the insertion of Lavelle, a far more attacking player, for Mewis, and restoring Morgan in a partnership with Tobin Heath and Lynn Williams, suggests a forward-looking approach is coming.

Davidson has been excellent in her appearances, too, and hardly a step down from Dahlkemper, who has had a handful of dodgy moments.

This feels like a team looking to score goals and play on the front foot. That’s what the players prefer, and what the fans prefer. Today, it appears, it is also what Coach Vlatko Andonovski prefers.

Canada has faced the United States more times than any other opponent — Monday’s Olympic semifinal will be the 62nd meeting between the teams — and to say the rivalry has been one-sided is an understatement.

The United States has 51 victories in the series. Canada has only three wins. But ask any fans of Canada and they will say that number should be four.

The game in question is the teams’ meeting in the 2012 Olympic semifinals in London, a rollicking 4-3 American victory that, from a United States perspective, stands even today as a signature moment of grit and perseverance. Canadians describe that game — a match they led three separate times — with a different vocabulary. “Robbed” is the most common term. Others are unprintable here.

“We feel like it was taken from us,” the Canadian captain Christine Sinclair said after the game. “We feel cheated.”

Sinclair, Canada’s greatest player, will have felt more aggrieved than most. She scored three times that day in Manchester, England, only to watch the Americans respond each time and then walk off with a last-minute winner by Alex Morgan.

The Canadians have been seething ever since, driven by some dubious refereeing that had led to the tying goal, and a persistent second-class status in the rivalry that, from a Canadian perspective, should have ended that day.

The Americans went on to win the gold in London, and Canada won the bronze, a feat it repeated in Rio. Now it has a chance, again, to rewrite that day in 2012. It has already closed the gap: More than half of the meetings since 2011 have been ties or one-goal American wins.

“In 2012, we were kind of on a hope and on a prayer,” Canada’s Desiree Scott said Sunday. “We were hoping we could get to that match, but now we truly believe in ourselves and what we can do on a soccer pitch, and we believe we can get to that gold medal game.”

The United States will not need to be reminded about that day in 2012. Five Americans — Morgan, Carli Lloyd, Kelley O’Hara, Tobin Heath an Megan Rapinoe — played in it, and every member of the squad knows the danger that Sinclair, a fixture of the National Women’s Soccer League, brings to every match.

“This is probably going to be our hardest game: We know that, and we are preparing for it that way,” U.S. coach Vlatko Andonovski said Sunday. “It’s a semifinal — it’s four of the best teams in the world.”

The International Olympic Committee expanded rosters for the Games, allowing each team to bring four alternates to Tokyo. The decision had roots in the pandemic, and created a bit of wiggle room in case of a coronavirus outbreak in any of the teams.

But when it made the change, the I.O.C. also set the criteria for who would get to call themselves an Olympian, and be eligible for a medal if their team wins one. That right would only go to players who were on an active roster for any game.

The United States made a point of rewarding its alternates during the group stage. Catarina Macario, Jane Campbell and Casey Krueger cleared the bar when they were in the 18-player team against New Zealand, and Lynn Williams did the same against Australia. (Williams, with a goal and an assist against the Netherlands in the quarterfinals, has since proved even more valuable.)

Sweden, Canada and Brazil (which was eliminated in the quarters) also have made sure to use all their players. Now they just need to make sure they have a medal to collect.