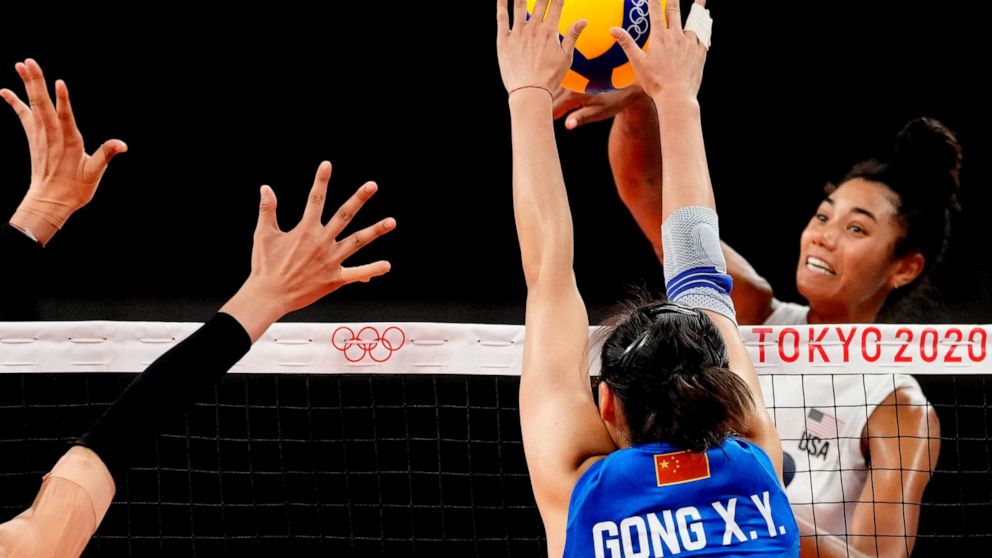 TOKYO — The expected Olympic showdown between the top two women’s volleyball teams in the world turned out to be a one-sided affair.

The U.S. women swept defending gold medalist China 29-27, 25-22, 25-21 on Tuesday in a pool-play match that left the Americans at the top of Pool B and the Chinese seeking to win their first set of the tournament after two straight sweeps to open the Games.

“When we play them, it’s always a great competition,” U.S. captain Jordan Larson said. “But ultimately, I thought we controlled what we could on our side of the net. I think it put them in a lot of trouble. Really proud of our team for imposing ourselves on them. But we know that the history of China and how they were in Rio, you just never know what could come.”

China was also swept by Turkey in the opener but showed five years ago in Rio de Janeiro how little the pool-play matches can mean after losing three of five of them before rallying to win gold.

That’s similar to what happened in London in 2012 when Brazil finished fourth in its pool before winning gold, as U.S. coach Karch Kiraly was quick to point out.

“It’s not unusual for a team to struggle in preliminary and then catch fire with a key win in the quarterfinals,” he said. “I wouldn’t count China out at all right now. They don’t want to be down 2-0, but that doesn’t mean they’re not capable of doing major damage in this tournament.”

The biggest question for China now is the health of stay Zhu Ting. She was subbed out twice in the opening match because of a wrist injury, the only time Kiraly said he could ever remember the MVP in Rio being a “non-factor” in a match.

She played the entire match on Tuesday with tape on her wrist and led China with 18 points, but it wasn’t nearly enough to overcome an American attack led by first-time Olympian Jordan Thompson.

“Today she was much more back to what you might expect Zhu Ting to be,” Kiraly said. “I wish her the best of health, but I don’t know how her health is. We can’t really worry about that. We just have to set up our game plan and be ready for all the great offense that she can bring at us, along with the other phases of her game. She’s the bedrock of that team. She’s the reason why they won five years ago in Rio. Without her, I don’t see how they win a gold medal. But with her, they are always capable of winning.”

The Americans are seeking their first gold medal in the sport after winning bronze in 2016 and silver in the two previous Games.

They are off to a fast start in Tokyo thanks in large part to the play of the 24-year-old Thompson. She had a game-high 20 points against France in the opener and was even better against China, especially at the end of a momentum-changing tight first set.

Thompson had 12 points in the set and a game-high 34 in the match as China had no answer for her play at the net.

“She’s a baller,” Larson said. “She’s been caged a little bit. She’s ready to come out and show what’s up. I’m just really proud of her. But she consistently shows up in practice, and that’s what you’re seeing today. … I think what sets true champions apart is people that can show up when the lights are on.”

In the first match of the day in women’s pool-play action, the Russians bounced back from a loss in the opener to beat Italy 3-0.