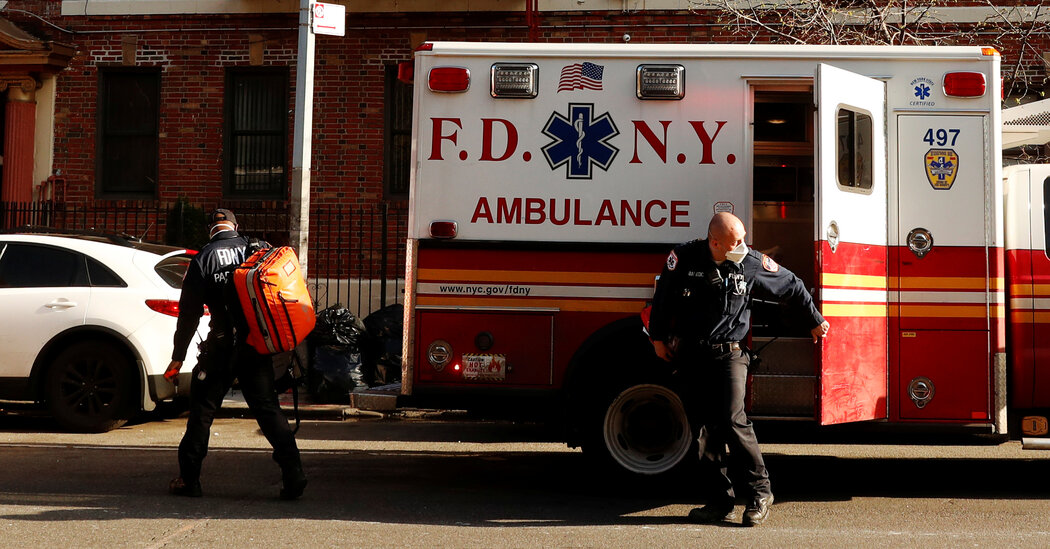 The parade was meant to honor New York City’s nurses, utility workers, pharmacists, educators, firefighters and more — all of the so-called essential workers who kept the city operating during the pandemic when many residents were sheltered at home.

But the moment of celebration also set off a fierce and growing backlash against Mr. de Blasio. Several municipal unions, including those who represent many emergency medical workers who played a crucial role in the city’s response to the pandemic, declined to participate in the parade because of ongoing disagreements with the city over pay, among other issues.

Oren Barzilay, the president of a union that represents some 4,100 emergency medical technicians, paramedics and fire inspectors, said many of those workers often put in 16 to 18 hour shifts four to five times a week at the height of the pandemic last year.

But he said the starting base salary for a new emergency medical technician — about $35,000 without overtime — left many workers struggling to make ends meet. He compared that salary to the starting salary of a firefighter, which is about $45,000. The union, F.D.N.Y. E.M.S. Local 2507, is currently engaged in contract negotiations with the city, which began before the pandemic.

City Hall did not immediately respond to questions about the union’s claims.

But in a news release on Tuesday, the mayor’s office said about 2,500 people — including hospital and municipal employees as well as workers at child care facilities, bodegas, utilities and several other industries — were expected to participate in the ticker-tape parade, which started around 11 a.m. The route ran along Broadway from Battery Park in Lower Manhattan north to City Hall, the so-called Canyon of Heroes, which has been a route to honor everyone from astronauts to presidents to championship sports teams.

City officials initially planned to have a ceremony outside City Hall at the end of the parade. But the National Weather Service has issued a heat advisory through Wednesday evening because of predicted high temperatures and heavy humidity, and at a news conference on Tuesday, Mr. de Blasio said that the ceremony would be “stripped down” because of the weather. Later in the day, the mayor’s office announced the ceremony would be canceled, but that the parade would go on.

Asked why the parade had been scheduled for July, Mr. de Blasio said on Tuesday that “it was going to be one of the first things we did” after reopening.

“I think it is the right thing to do to honor these heroes, the first available opportunity,” he said.

As the parade began on Wednesday, dozens of people stood along Broadway under the baking sun, clapping, cheering and waving signs reading “I Love N.Y.C.” and “Thank You First Responders.”

The crowds were far smaller than those that had gathered for many of the city’s famous ticker-tape parades of the past. But the mood was celebratory, with orange, white and blue confetti, reflecting the colors of the New York City flag, showering people along the route. Some people sounded air horns as they marched.

Maureen Kreider, 62, a nurse practitioner, said that having a parade was a “wonderful gesture.”

“Who gets to say they’re in a ticker-tape parade in New York City?” she said.

But John Pender, 32, an elevator mechanic marching with employees of the New York City Housing Authority, said that while he appreciated the recognition, a parade was not the compensation he felt essential workers needed.

“Honestly, I think essential pay would be a lot better,” he said.

Mr. Pender said he worried that he was putting his pregnant wife at risk by working during the pandemic.

Other groups also raised questions about the parade.

Andrew Ansbro, president of the Uniformed Firefighters Association, said Wednesday that instead of a parade, a “more appropriate gesture” from the city would have been to give hazard pay bonuses to essential workers.

Mr. Ansbro said a firefighter was currently in intensive care with pneumonia related to Covid-19. He said prayers for the firefighter’s recovery and a memorial to those who had died during the pandemic would have been preferable.

On Wednesday, the Legal Aid Society, a nonprofit that represents low-income New Yorkers in court, said that while it supported essential workers, the “precious dollars” spent on the parade should instead have been used to give pay bumps to public defenders and other court staff.

“Mayor de Blasio and his administration cannot credibly ask so many of the workers who risked their lives during the last year to settle for a parade rather than receive the compensation that they are rightfully owed,” the group said.

On Tuesday afternoon, Justin Brannan, a City Councilman who represents parts of Brooklyn including Bay Ridge and Dyker Heights, said that he would not be attending either.

“Out of respect for the EMS workers who’ve gotten nothing but lip service from this city for years, I will not be attending tomorrow’s parade,” Mr. Brannan said on Twitter. “NYC would not have survived #COVID19 without them. It’s time they get what they are owed. I won’t celebrate until they do.”

A spokeswoman for District Council 37, the city’s largest municipal labor union, which has some 150,000 members and includes the emergency medical workers union, said that the council’s leadership had not taken a position on the parade. But she said that “almost all” of the dozens of other local unions affiliated with D.C. 37, which operate independently, had indicated that they would not be participating in the event.

In a statement posted on its website, a union representing more than 5,000 social workers, contact tracers and other employees said it had declined to participate in part because the city had not adopted a program that would have allowed certain eligible city employees retire early. The union, Local 768, which is also affiliated with D.C. 37, said that after Mr. de Blasio ended a remote work option earlier this year, many employees returned to offices that they felt were not clean enough to work in.

“Local 768 represents many of the frontline, front-facing essential workers in this City who had to report to in-person work throughout this devastating pandemic,” the union said. “To participate in a parade is an injustice to how we have been treated and continue to be treated.”

Carlos Lizcano, 50, a paramedic with the city, said that the news of the parade amounted to a “slap in the face of every E.M.T. and paramedic that works for the Fire Department.” Mr. Lizcano said he had worked in emergency medical services since the mid 1990s, and had been a paramedic for 15 years.

He said as soon as he heard Mr. de Blasio announce there would be a parade honoring essential workers, he decided he was not going He said it seemed like the event was “just for optics.”

“You want to throw a parade to honor us?” he said. “Honor us the way we should be honored. Negotiate with us in good faith when it comes to our new contract.”