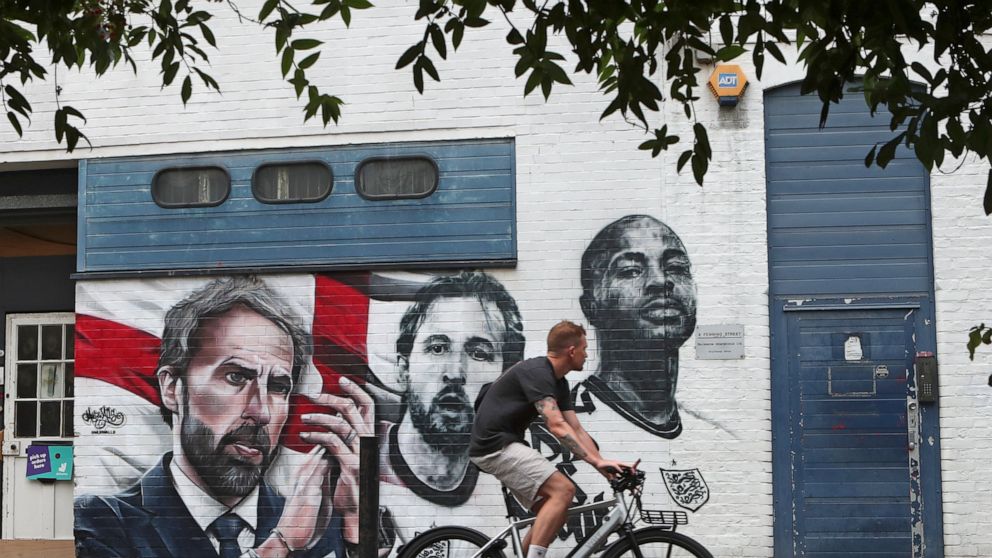 LONDON — U.K. Prime Minister Boris Johnson says the government plans to ban anyone guilty of online racist abuse from soccer matches as authorities continue to respond to the lawlessness connected to England’s loss in the final of the European soccer championship.

Johnson on Wednesday told lawmakers that it was time to act after three Black members of England’s national team were targeted by racist abuse on social media after they failed to score during the penalty shootout that sealed the team’s loss to Italy on Sunday night. The government plans to add online racism to the list of offenses for which fans can be barred from matches, he said.

Courts are allowed to issue banning orders if a fan is convicted of a “relevant offence” linked to a match, including crimes such as disorderly behavior or possession of weapons.

While many fans have rallied around Marcus Rashford, Jadon Sancho and Bukayo Saka since the players were targeted on social media, activists said racism in English soccer is a longstanding problem that authorities haven’t done enough to address.

Sancho spoke out about the incident in an Instagram post on Wednesday, encouraging young players who have experienced similar abuse to stay strong and “keep chasing the dream.”

“I’m not going (to) pretend that I didn’t see the racial abuse that me and my brothers Marcus and Bukayo received after the game, but sadly it’s nothing new,” he wrote. “As a society we need to do better, and hold these people accountable.”

Sunday’s European Football Championship final was also marred by unruly behavior in central London and around Wembley Stadium, where ticketless fans stormed past police and into the game. Some observers have sharply criticized London’s Metropolitan Police Service for failing to adequately prepare for what clearly would be a massive event.

The police department issued a statement Wednesday defending its actions, saying top brass had deployed “one of the most significant and comprehensive policing plans” ever rolled out for a soccer game.

Even so, some ticketless fans tried to push their way into stadium, injuring 19 police officers who were trying to control volatile crowds.

Police made 26 arrests at Wembley and another 25 in central London.

“I do not accept that the policing operation failed, and I standby the difficult decisions made by police officers and the Met’s public order commanders,” Deputy Assistant Commissioner Jane Connors said. “Without their immediate intervention, it is possible that this game could have been abandoned,”

The “ugly scenes at Wembley” will be reviewed by the Football Association and by police, Connors said.

“Where lessons can be learnt, we will work with partners to ensure that future matches are not disrupted by a group of hooligans who are fueled on alcohol,” she said.