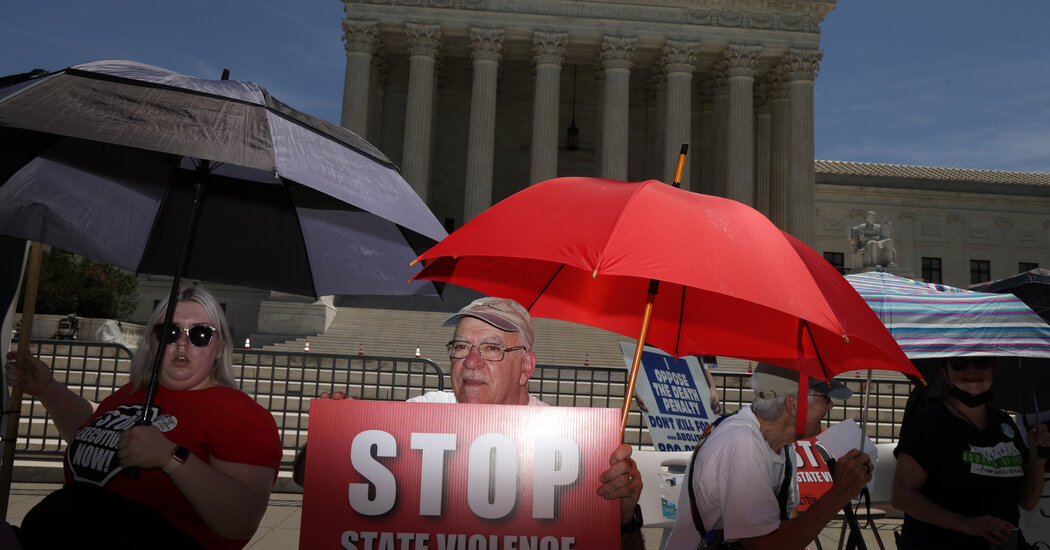 Those cases and four others prosecuted in federal courts around the country all had a common theme — they were among cases in which the Justice Department under President Donald J. Trump directed federal prosecutors to seek the death penalty if they won convictions.

But now, under a new presidential administration, the Justice Department has moved to withdraw the capital punishment requests in each of the seven cases. The decisions were revealed in court filings without fanfare in recent months.

The decision not to seek the death penalty in the cases comes amid the Biden administration’s broad rethinking of capital punishment — and could signal a move toward ending the practice at the federal level.

Earlier this month, Attorney General Merrick B. Garland announced a moratorium on federal executions and ordered a review of the way death sentences are carried out. But the decision not to seek the death penalty in cases where it had already been authorized goes further, taking capital punishment off the table in cases that are still being prosecuted.

It was not immediately clear whether the decision to withdraw the death penalty authorizations in the seven cases was part of a broader effort, and the Justice Department has not announced policy changes in how or when the government seeks the death penalty.

But the change in approach from the previous administration has been pronounced.

After a near two-decade hiatus in federal executions, Mr. Trump’s administration, during his last six months in office, carried out the executions of 13 death row inmates, including three in the final days of his presidency.

But Mr. Garland, who as attorney general has the final say on whether to seek capital punishment in a federal prosecution, has not personally authorized the death penalty in any case since he assumed office in March, the Justice Department said in a statement.

And in a memorandum announcing the moratorium this month, Mr. Garland noted concerns about the death penalty, including its disparate impact on people of color and the troubling number of exonerations, and all but encouraged Congress to review the issue.

The withdrawal of death penalty authorizations and the absence of new cases under Mr. Garland has raised hope among death penalty lawyers and others that the administration’s approach to the highly divisive issue could signal a new policy on capital punishment.

“I don’t know where this is all going,” said Lisa Peebles, the federal public defender in Syracuse whose client, William D. Wood Jr., no longer faces a potential execution in the two restaurant murders. “But I’m hoping it’s heading in the direction of a moratorium and eventual abolishing of the death penalty,” she added.

Ms. Peebles said that in Mr. Wood’s case, the defense did a full-blown investigation last year and determined that he suffered from intellectual deficits, which she said disqualified him from being subject to the death penalty. She said the local United States attorney’s office, with her permission, had experts conduct their own assessment and reached the same conclusion. Both studies were submitted to the Justice Department, she said, and she believes they influenced its decision.

The Justice Department declined to comment on the case.

Other lawyers are still waiting for responses to their requests for de-authorization of the death penalty in their clients’ cases.

Jacqueline K. Walsh, an attorney, said she submitted a de-authorization request to the Justice Department under Mr. Trump in January 2020 on behalf of her client, an alleged gang member charged in Detroit with two murders. He has pleaded not guilty.

Ms. Walsh said that her submission argued that the government should be barred from seeking the death penalty against her client, whom she described as a person with intellectual disability.

She has yet to receive an answer even from the new administration, she said, but added, “I believe that we have a friendlier ear, given the language in the memorandum authored by the attorney general.”

One of the most prominent cases in which the defense has indicated it may ask the Justice Department to withdraw authorization involves Sayfullo Saipov, the Uzbek man charged in a 2017 truck attack that killed eight people on a crowded Manhattan bike path.

A federal indictment said Mr. Saipov carried out the attack for the purpose of joining the Islamic State, or ISIS.

After Mr. Saipov’s arrest, Mr. Trump declared on Twitter “SHOULD GET DEATH PENALTY,” and Jeff Sessions, then the attorney general, eventually authorized federal prosecutors to seek it.

Mr. Saipov’s trial has been long delayed, most recently because of the pandemic. At a court hearing in Manhattan on June 3, Mr. Saipov’s lawyer, David E. Patton, said he would seek reversal of the death penalty authorization for his client and was waiting to see whether the Justice Department’s new leadership would make changes to the government’s policies in capital cases.

“President Biden ran on a campaign to end the federal death penalty,” Mr. Patton said, suggesting strongly that if the authorization was withdrawn, Mr. Saipov would plead guilty and serve a life sentence.

“I doubt there would be a trial, period,” Mr. Patton said.

Rachel Pharn, a survivor of the attack — the truck crushed her foot and badly bruised her arm and shoulder — said that she was “not an absolutist” about the death penalty and that it seemed fair for the government to seek capital punishment and for Mr. Saipov’s lawyers to fight against it.

“I would look toward the government to make the right decision,” she said.

Of the seven cases in which Mr. Garland has dropped the death penalty authorization, three defendants, including the man in Orlando and two defendants in Louisiana, have since pleaded guilty.

Some legal experts said it was too early to tell what the seven scattered cases signified, and one lawyer suggested Mr. Garland could have been even more assertive.

“I think it’s a good and important step by the attorney general, but there’s no question that it’s not far enough,” said Cassandra Stubbs, director of the Capital Punishment Project at the American Civil Liberties Union.

“President Biden should issue a much broader moratorium,” Ms. Stubbs added. “He should ask for a moratorium on all death penalty prosecutions.”

But Michael Rushford, president of the Criminal Justice Legal Foundation, a nonprofit group in Sacramento, Calif., that supports crime victims and the death penalty, was critical of Mr. Garland’s decisions in the seven cases. “The families of murder victims are clearly not included in the calculus when ordering U.S. attorneys not to pursue capital punishment in the worst cases,” he said.

Under Mr. Garland, the Justice Department has continued to fight the appeal of the death sentence imposed on Dylann Roof, the white supremacist who murdered nine Black churchgoers in Charleston in 2015. And in the case of Dzhokhar Tsarnaev, who was convicted of helping to carry out the 2013 Boston Marathon bombing, which killed three people and injured more than 260, the Justice Department has asked the Supreme Court to reinstate the death penalty, which had been overturned on appeal.

Robert Blecker, a professor emeritus at New York Law School and a proponent of capital punishment, said he had no problem with the idea that one administration would reverse a decision to seek a death sentence made by an earlier administration.

“Reasonable minds can and do differ as to the death penalty,” Professor Blecker said. “What one set of prosecutors see as death-worthy, another may not.”

A pending death penalty case in Kentucky may be an example of that.

It was in February — during the early days of the Biden administration but before Mr. Garland assumed his post — that the United States attorney’s office for the Western District of Kentucky filed court papers saying it intended to seek the death penalty against Victor Everette Silvers, who had been charged with the murder of his estranged wife, an active duty soldier at the Fort Campbell military base. He has pleaded not guilty.

But in a news release, the prosecutors noted that the decision to seek capital punishment had been made by Jeffrey A. Rosen, while he served as the acting attorney general during the final month of the Trump administration.

“Rosen authorized and directed the United States attorney’s office for the Western District of Kentucky to seek the death penalty,” the release said.

A Justice Department spokesman declined to comment on the decision by the department, then led by Acting Attorney General Monty Wilkinson, to file a death penalty authorization that had been decided on by Mr. Trump’s administration.

Not surprisingly, Mr. Silvers’s attorneys say they want a fresh chance to plead their case with Mr. Garland’s staff.

“The defense team will be seeking an audience with the new administration in an effort to overturn this decision and persuade the attorney general to de-authorize the death penalty in this particular case,” the lawyers wrote to the judge in May.

The judge, Thomas B. Russell, in an order this month, urged the defense, the prosecutors and the Justice Department to “act quickly and cooperate to the fullest extent regarding this matter.”