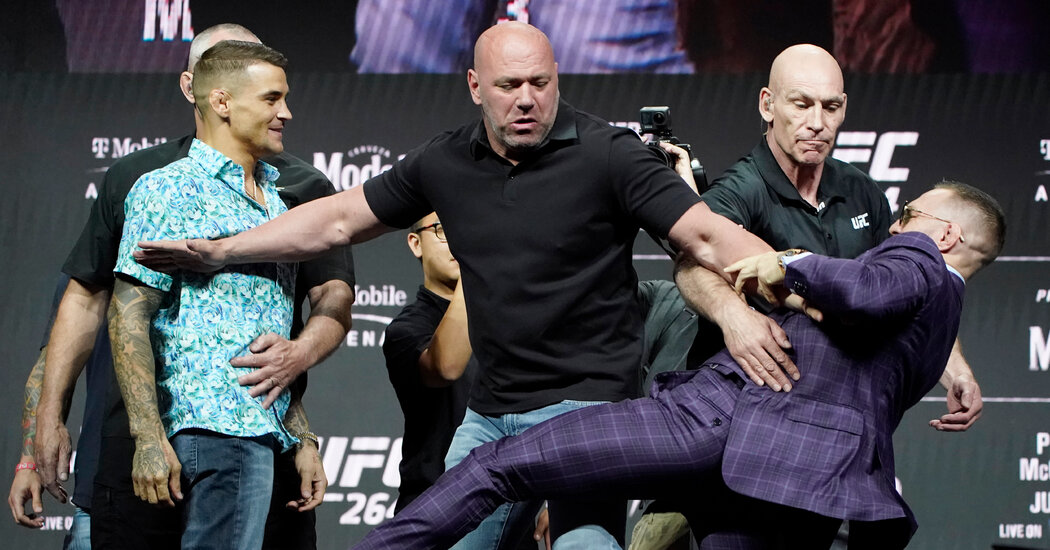 LAS VEGAS — In the buildup to Conor McGregor’s last fight with Dustin Poirier in January, McGregor deviated from the brash, trash-talking bravado that had propelled him to the peak of stardom in the Ultimate Fighting Championship.

He praised Poirier regularly. He asked for a bottle of his opponent’s branded hot sauce. He pledged to donate $500,000 to a charity Poirier had started in his home state of Louisiana.

Then, he was knocked out by Poirier in the second round in a defeat that hurt his already loosening grip on the sport, given a loss in 2018 to Khabib Nurmagomedov and his growing focus outside the octagon.

Now, as McGregor and Poirier, both 32, prepare to complete their trilogy on Saturday night as the main event of U.F.C. 264 at T-Mobile Arena, McGregor (22-5-0) has returned to his original form.

At a news conference Thursday, the first time the two men saw each other in person since they last clashed, McGregor insulted Poirier’s wife, acted as if he would throw hot sauce on him and then threw a kick toward him as they faced off.

But aside from all of the gestures and antics that attract pay-per-view buys and generate story lines, McGregor said he wants to remind the world of the high-caliber mixed martial artist he is. A victory against Poirier (27-6-0) in stunning fashion would do that, he said.

“It’s another feather to the cap,” McGregor said. “I love to come in here, defy the odds, do the unthinkable and put on a show. It was a fluke win, and I’m going to correct it Saturday night.”

McGregor, who entered the U.F.C. in 2013, quickly rose to the height of the sport through his performances inside the octagon and his persona outside of it. He boasts a powerful left hand, which usually shocks an opponent to devastating effect when it connects with the chin. He has paired his skill set with a clean, sophisticated wardrobe and a knack for persistently taunting opponents.

In 2014, he fought Poirier in the 145-pound featherweight division. It was McGregor’s fourth fight in the U.F.C., and experts believed that Poirier, then a 10-fight veteran in the company, was his toughest opponent yet. McGregor still predicted a first-round finish and delivered on that forecast with a technical knockout, giving himself the nickname “Mystic Mac.”

From there, McGregor’s popularity soared. Within two years, he captured the featherweight and lightweight belts, becoming the first athlete in U.F.C. history to hold championships in two weight classes simultaneously.

In 2017, he participated in a crossover boxing match with Floyd Mayweather, a global spectacle that earned McGregor a guaranteed $30 million. He also founded Proper No. Twelve, an Irish whisky brand, which he sold his stake in this year for a reported $600 million.

But the U.F.C. stripped him of both his belts because of inactivity and he soon began facing legal trouble.

He pleaded guilty to assault for punching a man in 2019 at a bar in Ireland and took a plea deal for throwing a hand cart at a bus carrying U.F.C. fighters in Brooklyn in 2018. In January, McGregor was sued in Ireland by a woman who claimed he raped her in 2018, an accusation he has denied (Irish police and prosecutors also declined to pursue criminal charges against him).

While McGregor dealt with his legal issues and business ventures, and became a father to three children, Poirier was building a respectable résumé.

He moved up to the 155-pound lightweight division in 2015 after losing to McGregor and won 10 of his next 13 fights against quality competition, including victories over Anthony Pettis, Justin Gaethje and Max Holloway. He captured the interim lightweight belt in 2019, but lost to Nurmagomedov, who had beaten McGregor a year earlier.

When McGregor and Poirier fought in January in Abu Dhabi, McGregor had been far less active, while Poirier was riding a successful streak.

In the fight, McGregor landed clean shots, but Poirier held up well, something he did not do in the first contest. He attacked McGregor’s lead leg frequently with kicks to the calf, which bruised and reddened as the first round ended.

McGregor’s base could no longer support his body when Poirier landed a punch to his nose, which sent him to the ground next to the fencing in the second round. Poirier delivered finishing punches.

At their news conference on Thursday, Poirier said the trash talking affected him in 2014, but McGregor’s aura dwindled in January. He feels the same ahead of U.F.C. 264, he said.

“There’s a very dangerous fighter sitting here, no doubt, but I see a man that I’ve defeated and I know I can defeat again,” Poirier said.

After the previous fight, the two men traded barbs on social media, and McGregor donated $500,000 to the Boys & Girls Clubs of Acadiana instead of Poirier’s the Good Fight Foundation.

Some questioned why McGregor would even continue in the U.F.C., given the amount of money he has made in his career. McGregor, who had predicted that he would become a billionaire by age 35, said he does it for legacy.

“I’m not relishing in my past accomplishments,” McGregor said, adding: “I don’t care about that.”

Still, McGregor faces pressure to perform well on Saturday, even if he does not admit it. A loss would be the his fourth defeat in his last seven fights.

He said he took this training camp more seriously, and left his children at home in Ireland so he could properly focus. When a reporter noted that McGregor had won only one fight since President Barack Obama left office in January 2017, he took offense.

“Shut your mouth,” McGregor interjected while the reporter tried to finish the question.