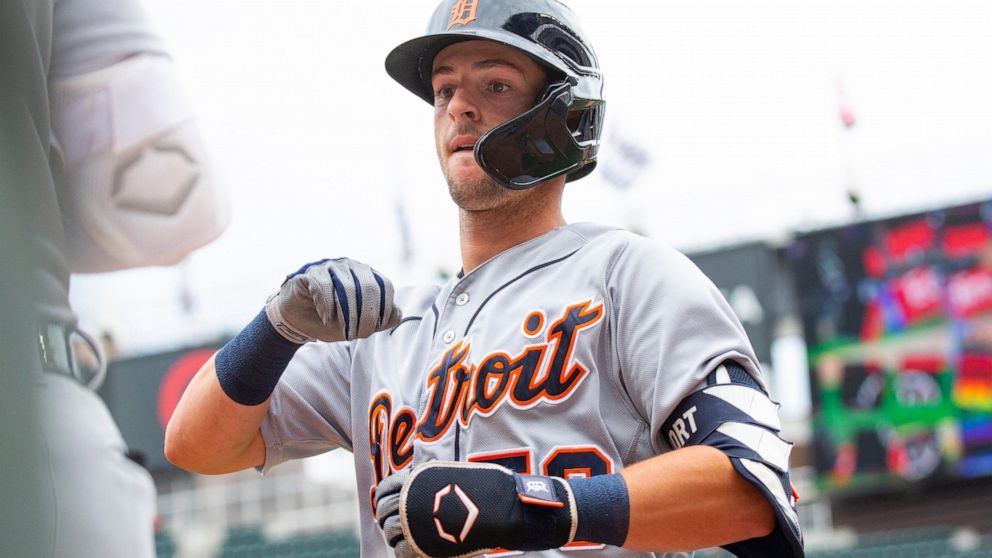 MINNEAPOLIS — Jorge Polanco hit a go-ahead three-run homer in the seventh inning and the Minnesota Twins rallied from a four-run deficit to beat the Detroit Tigers 9-4 Saturday.

Alex Kirilloff also homered for Minnesota to put the Twins on the board in the sixth. Luis Arraez drove in two insurance runs with an eighth-inning single.

The Twins have won the first three games of the series against the Tigers, with one remaining before the All-Star break.

After Andrelton Simmons snapped an 0-for-19 slump with a base hit and Arraez followed with a single, Polanco took reliever Joe Jimenez (2-1) deep to right to give Minnesota a 5-4 lead.

Detroit threatened in the eighth with the tying run on third and one out, but Twins reliever Alex Colomé struck out Eric Haase and Jeimer Candelario to escape the jam.

Niko Goodrum and Zack Short hit back-to-back solo homers in the second inning off Twins starter Bailey Ober to put Detroit up 2-0. It was the third time this year the Tigers have gone back-to-back.

Ober surrendered four runs in just 3 1/3 innings, matching the shortest of his eight starts in his debut season. Danny Coloumbe (1-0) earned his first win since 2018 with 1 1/3 scoreless innings of relief.

Baldelli and his fiance, Allie, will tie the knot on Tuesday in a small ceremony. He said the couple has plans for a bigger celebration eventually, possibly during the offseason.

“We’ve been together a long time,” Baldelli said. “I probably should have been on this and gotten this done a little while ago, but it’ll be great.”

Tigers: RF Nomar Mazara was scratched from the lineup Saturday after feeling under the weather. He was replaced in the lineup by SS Zack Short, with Niko Goodrum moving from shortstop to the outfield.

Twins: Baldelli said C Mitch Garver is “meeting some thresholds” as he works his way back from a groin contusion. Garver remains on track to join Triple-A St. Paul next week to begin a rehab assignment.

RHP José Berríos (7-3, 3.36 ERA) will get the start for Minnesota in Sunday’s series finale. Berríos allowed just one earned run and struck out 10 in seven innings his last time out in a loss against the White Sox. Detroit will counter with RHP Wily Peralta (2-1, 2.14 ERA), who is making his fifth start of the year. Peralta threw seven scoreless innings against Texas in his most recent start.