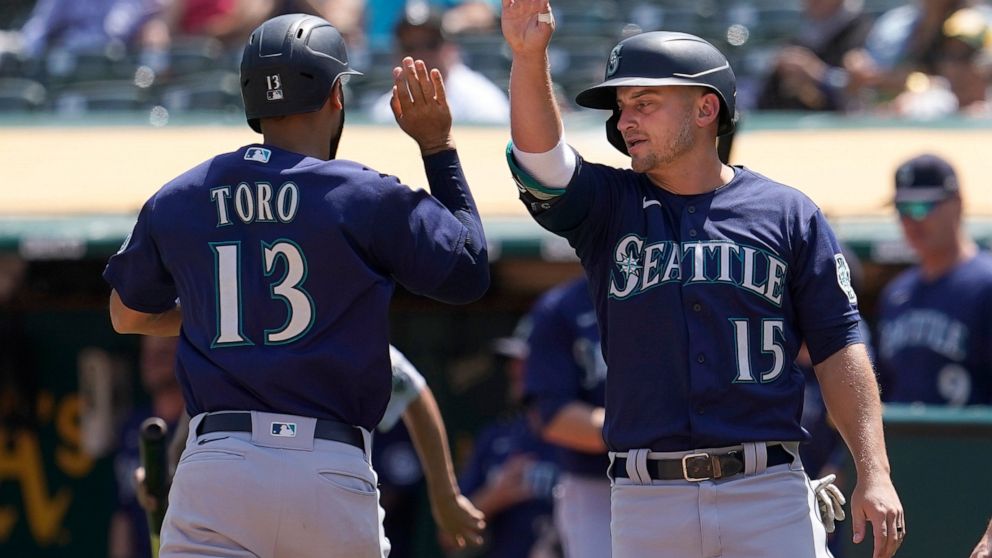 Luis Torrens hit a tiebreaking two-run single, Chris Flexen pitched neatly into the seventh inning and the Seattle Mariners swept a quick two-game series against the Oakland Athletics with a 5-1 win

The A’s managed three straight singles in the first against Flexen (11-5), who settled in and struck out five over 6 2/3 innings. He allowed six hits and walked one, and the Mariners improved to 17-7 in his outings.

Mitch Moreland hit an RBI single for Oakland in the first before Jarred Kelenic tied it at 1 with a single of his own in the second. Kelenic also doubled home Tom Murphy in the eighth and scored on Dylan Moore’s single.

Elvis Andrus hit a two-out double in the seventh and Mark Canha walked to chase Flexen, but Oakland came up empty. Starling Marte hit a high fly against Drew Steckenrider, who earned his sixth save.

The A’s lost their fourth straight game — all but Tuesday’s result by two or fewer runs — and eighth in 10 following a 12-3 stretch.

A day after he was a late scratch because of a bruised left foot, Oakland third baseman Matt Chapman got hit by a pitch in his left wrist area in the fourth but stayed in the game.

The Mariners’ 5-3 win Monday was their 30th comeback victory and second straight rallying in the ninth to win.

“I’ve never been a part of a team that’s done it this frequently late in games,” manager Scott Servais said, noting he wishes Seattle would put up a few more runs early.

“Quite frankly it would make everybody’s life a little bit easier, but we’re in the entertainment business, why not make it interesting, right?”

Mariners: With the way the off days line up, the Mariners will stick with their regular rotation that gives the starters an extra day of rest they could use at this stage, Servais said.

Athletics: RHP Chris Bassitt’s facial surgery in Chicago went as planned and the A’s are encouraged after the pitcher was hit by a line drive against the White Sox last week. Plastic surgeon Dr. Peter Revenaugh at the Rush Medical Center performed the operation to stabilize three fractured cheekbones while also removing other small fractured bones. The team said “Chris is stable and resting comfortably and will have follow-up appointments upon his arrival to Oakland,” which is expected to be later this week. “Very successful, so that is great news,” manager Bob Melvin said. “All the little nuance things that we probably knew about in there all went beautifully, took out fragments, the whole bit. So I think it went exceptionally well and everybody feels great about that.”

Seattle outrighted right-hander Robert Dugger to Triple-A Tacoma after he was designated for assignment Sunday.

Seattle is off Wednesday and Yusei Kikuchi (7-7, 4.22 ERA) is set to start the series opener at home against Kansas City on Thursday night. He is looking to snap a three-start winless stretch and avoid back-to-back losing starts for the second time in 2021.