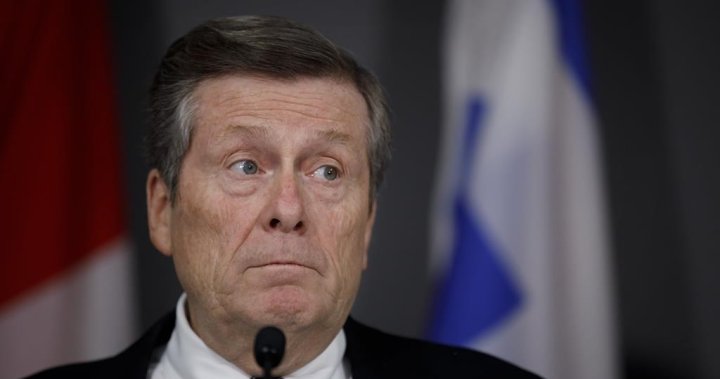 Toronto Mayor John Tory responded to questions about his role in the Rogers family trust on Wednesday, saying it hasn’t affected his commitment to the top job at City Hall.

Speaking at an unrelated event, Tory was asked about the appropriateness of his role in the trust amidst a growing feud involving the Rogers family that has spilled into the public.

“If there’s been anything that the city required of me at any hour of the day, on any day of the week, any day of the month, any week of the year — I devote myself to that first, and that includes sometimes putting my family second,” he told reporters.

The trust is the controlling shareholder of the company.

Tory’s connection to the late Ted Rogers is a longstanding one that dates back to his father, and he previously ran the company’s cable division.

“The fact that I might take a few hours of my time to do something else — whether it’s in respect to an obligation I made to a friend, or whether I was out playing a sport or spending time with my family, or going to see some art — I think that people will understand.”

Tory also confirmed to reporters that he receives compensation for his role on the trust, but said he has abided by the law scrupulously every day.

The Toronto Star first reported Tuesday that Tory receives $100,000 per year as a member of the trust, although the mayor did not confirm that amount to reporters Wednesday.

Rogers Communications has been propelled into the headlines this month, in large part due to the ongoing battle for control of the telecom giant.

Edward Rogers was recently ousted as chairman of the board, following an attempt to remove chief executive officer Joe Natale.

He has since gone to British Columbia’s Supreme Court, in an attempt to legitimize the company board he formed over the objections of some of his relatives.

The drama has since thrust Tory’s role within the family trust — and whether remaining in that role is appropriate while he serves as Toronto’s mayor — into the spotlight.

“You cannot be in a senior position in the trust and in the city, and simultaneously represent the best interests of each,” said Richard Leblanc, professor of governance, law and ethics at York University.

Leblanc told Global News in his opinion, Tory’s role with Rogers constitutes a conflict of interest.

“It is the power of RCI, this trust board. So in many jurisdictions, when politicians go into office, they stand down from all commercial relationships, and that’s for the simple reason of exactly what we’re going through now. It is the potential for conflict of interest and divided loyalties.”

B.C.’s Supreme Court is slated to hold a hearing on Nov. 1.