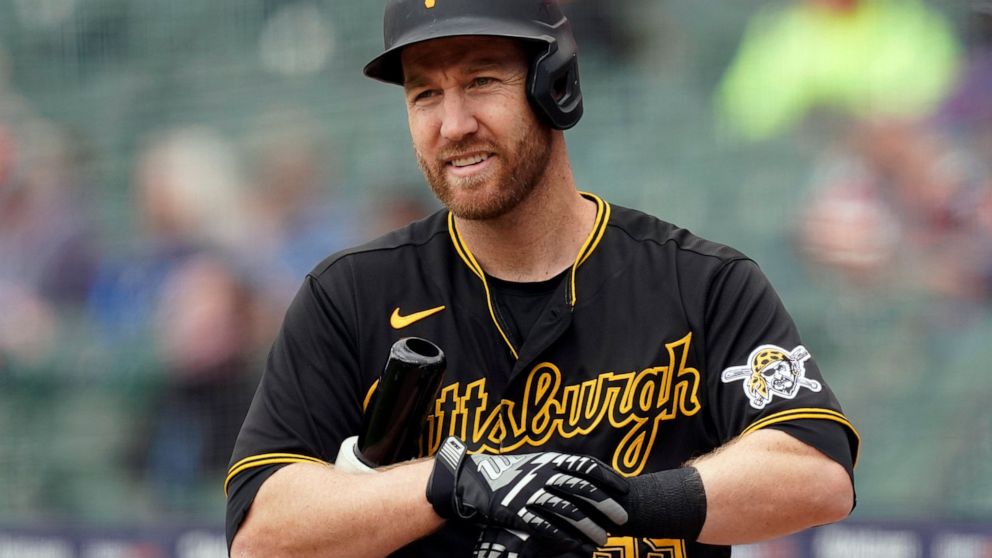 Frazier has experience playing Japan. Back when he was 12 years old in 1998, he went 4 for 4 and pitched two-hit ball over the final two innings as his Toms River East American team beat Kashima 12-9 in the final to win the Little League World Series.

Now near the end of his playing days, the two-time All-Star is the emotional force on the 24-man American roster headed to Yokohama for the six-nation Olympic tournament starting July 28 that also includes the Dominican Republic, Israel, host Japan, Mexico and South Korea.

Released by Pittsburgh in May after going 3 for 35 this season, the Toddfather helped the U.S. qualify for the Olympics on its second try, going 4 for 4 with a home run and two RBIs in the berth-earning 4-2 win over Venezuela on June 5 at Port St. Lucie, Florida.

When the U.S. team gathered for that tournament, Frazier was given an additional task by former big leaguer Ernie Young, the U.S. hitting coach.

“He said, `Fraiz, you know what to do. Get these guys going for every game,‘” Frazier explained. “So I would bring them all together, give a little pep talk and get them fired up, kind of like we’re playing in a Super Bowl because it was Game 7 every game.”

The U.S. roster includes baseball senior citizens such as Frazier and pitchers Scott Kazmir, Edwin Jackson and David Robertson, and a handful of top prospects as Tampa Bay pitchers Joe Ryan and Shane Baz. Major League Baseball does not release anyone on 40-man rosters for the Olympics, and general managers often discourage eligible players in their farm systems.

U.S. manager Mike Scioscia, who led the Angels for 19 seasons, says Frazier brings “a relaxed focus” that filters through to the rest of his roster.

“I’ve been seeing Todd from an opposing dugout for a long time. His attitude and his commitment is second to none,” Scioscia said. “He loves this game of baseball. He loves competing, and he loves putting on the USA jersey. So there’s no doubt that his leadership was huge.”

He also was on the U.S. collegiate national team for the 2006 World University Baseball Championship in Havana with David Price, Jake Arrieta and Sean Doolittle and on the 2010 U.S. team for Pan American Games qualifying, joined by Mike Trout, Eric Hosmer, Mike Moustakas, Danny Duffy and Chris Archer, a group managed by Young.

“It’s just so exciting playing for your country because you’re not only representing yourself, your country, you’re representing the people that fought for your country, too,” Frazier said. “That’s how extreme it is. You want to play good for them. And when you think like that before games and you go out and play for others, good things usually happen.”

Olympic baseball is far from the high-tech life of the major leagues, where analytics departments parse spray charts, spin rates and scouting reports that some players fixate on and others ignore at their peril. When Frazier reported to the U.S., it was like a trip back in time.

“Basically, we had nothing. We had no video. We had no analytical process. It’s here’s your bat. Bring your own stuff. This is your jersey,” he said. “We got food for you. Now go out and play. Yeah, that’s what I love — everything about it.”

As recently as two years ago, Frazier had 21 homers and 67 RBIs. He hopes to regain that form.

“Making the big play, making that big hit at the end of the game, I think that’s what drives me to be the best possible player I can be,” he said. “And knowing that I still can do it, I think that fulfills me. I want to show my kids who their dad is.”

His 7-year-old son, Blake, is the short right fielder on an 8-and-under all-star team preparing for a July 10 opener. He gets home coaching.

“Not being mean or anything, but just teaching him the ropes.” Frazier said.

Frazier’s fun is infectious for the U.S. and for his family, too. His wife, the former Jacquelyn Verdon, was a gymnast when they met at Rutgers in a class called public speaking for athletes.

“She got an A. I got a B, and I was pretty upset, because I thought I did a better job,” he said with a smile.

Their 5-year-old daughter, Kylie, is a gymnast and 2-year-old son Grant may play football.

With Blake and Kylie Kimberly that morning, practice began at home, not his wife’s ideal way to start her day.

“She complained about him swinging the bat at 8:30 this morning in the kitchen,” Frazier related. “I said Jackie, come on, let the kid swing. It’s baseball. I used to do it. She goes, `This is the weirdest thing in the world. Why didn’t you go outside?′

“I said because, first, it’s raining. And second, the bat’s right there. That’s what we do. We visualize. We do whatever. Baseball players are crazy. And she just looks at me like befuddled and said, ‘We never did this in gymnastics.′ I’m like, your daughter’s over there in the family room flipping all over the couches. I said, let’s go. We started laughing.”

Home time became a benefit of getting released.

“I get to see these things now, which is great,” he said. “Do I miss baseball in the major leagues? Of course, but I’ve come to grips with it.”

Frazier has 9 years, 93 days of major league service and needs 79 days more to fully vest in the pension plan. After he’s done playing, perhaps a career in broadcasting is ahead.

“I’m going to try and get on the team by the end of the year here,” he said. “If not, I’m going to try in spring training one more time and hopefully I’ll fight my way to get one more one more year and it’ll be great.”