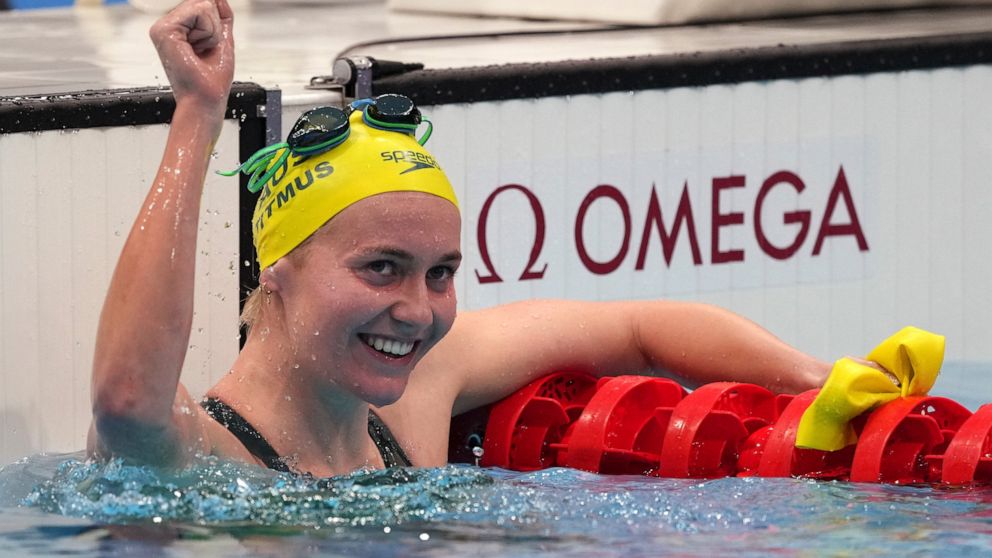 Titmus lived up to the billing of her nickname the “Terminator” when she chased down Katie Ledecky in the 400 freestyle Monday to win one of the most anticipated races of the Summer Games.

Doncic scored 48 points in his first Olympic appearance to tie for the second most ever in men’s basketball history, leading Slovenia to a 118-100 victory over Argentina.

Titmus trailed by nearly a full body-length at the halfway mark of the eight-lap race before erasing the gap and finishing in 3 minutes, 56.69 seconds. It was the second-fastest time in history, surpassed only by Ledecky’s world record of 3:56.46 from the 2016 Rio Games.

“It’s probably the biggest thing you could pull off in your sporting career,” Titmus said, “so I’m over the moon.”

Ledecky lost an individual Olympic final for the first time after winning the 800 free at the 2012 London Games, then capturing three more golds in the 200, 400 and 800 free at Rio de Janeiro five years ago.

Doncic scored 31 points in the first half, putting him on pace to break the Games’ scoring record of 55 points by Brazilian Hall of Famer Oscar Schmidt in 1988. He ended up tied with Eddie Palubinskas, who had 48 for Australia in the 1976 Games in Montreal.

Caeleb Dressel started his quest for six gold medals in swimming by leading the United States to victory in the men’s 4×100-meter freestyle relay.

Dressel, who has been hailed as the successor to Michael Phelps, gave the U.S. the lead in the opening leg and his teammates made sure it stood up.

Dressel is competing in three individual events and two more relays in Tokyo.

A dramatic comeback for the U.S. softball team against Japan earned the Americans a small prize. When the countries play again it will be for the gold medal.

Kelsey Stewart homered leading off the seventh inning to lead the U.S. to a 2-1 victory to win the group stage and give it the right to bat last in the gold medal game. The longball was the first for the United States this tournament.

“It’s like you dream about when you’re a little kid, about hitting a home run at the Olympics, let alone a walkoff,” Stewart said.

Monica Abbott pitched a perfect seventh in relief for her third win of the tournament. She is likely to start Tuesday’s gold medal game, a day before her 36th birthday.

The Americans lost the gold medal game 3-1 to Japan in 2008, the previous time softball was in the Olympics.

Youth was served at the debut of the Olympic skateboarding event for women.

“It’s going to change the whole game,” U.S. skater Mariah Duran said. “This is like opening at least one door to, you know, many skaters who are having the conversations with their parents, who want to start skating.”

A second judo athlete has dropped out of the Olympics before facing Israel’s Tohar Butbul in the 73-kilogram division.

Olympic officials say Sudan’s Mohamed Abdalrasool didn’t show up to face Butbul in their round of 32 bout Monday despite weighing in for the bout earlier.

Algeria’s Fethi Nourine was sent home from the Tokyo Games and suspended by the IJF on Saturday after he withdrew to avoid a potential round of 32 matchup with Butbul. Nourine was supposed to face Abdalrasool for the right to meet Butbul.