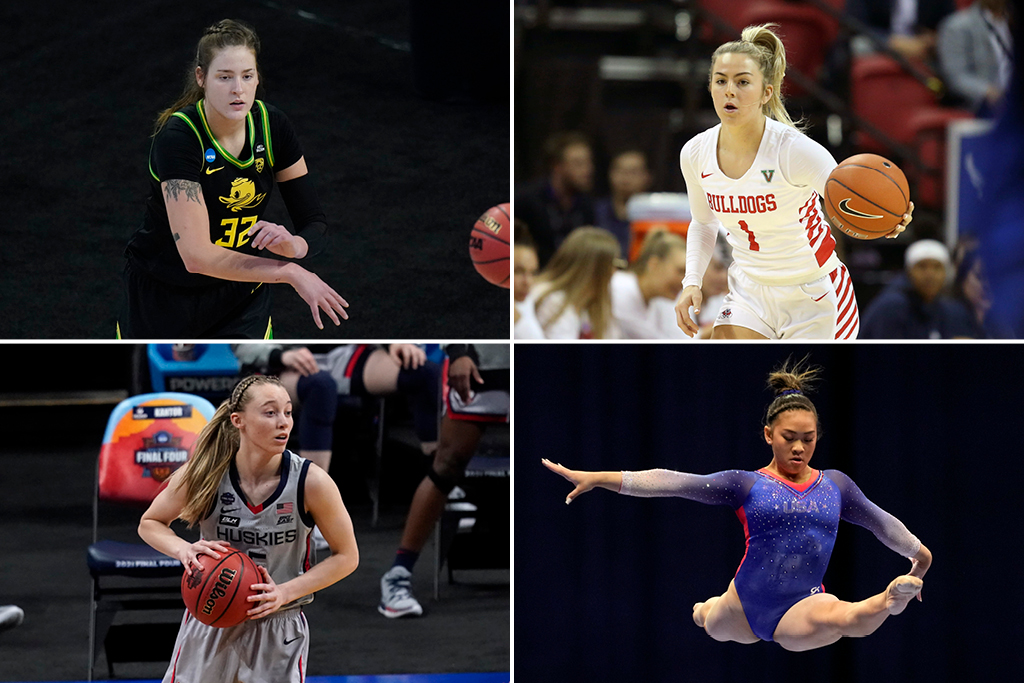 Last month, twin basketball players Haley and Hanna Cavinder from Frenso State made history as two of the first college athletes to sign deals off their name, image and likeness (NIL), thanks to a new partnership with Boost Mobile. Their appeal goes far beyond their jump shots. The female athletes have a trendy TikTok, with a 3.5 million fan following, filled with viral dance challenges.

After governance bodies adopted a uniform interim policy suspending NCAA name, image and likeness rules for all incoming and current student-athletes in all sports, the question became: Who is likely to cash in? Some experts bet that the move could level the playing field for women — who have been traditionally underpaid compared to their male counterparts.

“I credit the success of name, image and likeness to the emergence of the strength of the woman athlete. The door is now open and women are finally, in sports, at the starting gate with men,” Sonny Vaccaro, the now retired sports marketing executive, who has churned out some of the biggest brand deals with the likes of basketball icons such as Michael Jordan and the late Kobe Bryant, told FN.

Since 1972, Title IX has helped open the doors of opportunity for girls and women in previously male-dominated fields, but even as Title IX approaches its 50th birthday next year, the journey to equality has been a long and bumpy road.

Just in March, gender inequalities came to light after student-athlete Sedona Prince surfaced images and videos on social media, depicting stark differences between the women’s and men’s weight room facilities during the NCAA basketball tournament. Plus, few athletes have been as vocal as the United States Women’s National Team, who have been the face of gender equality in recent years, as the soccer team continues to fight for equal pay, demanding their voice be heard.

It’s these kinds of call-to-actions that has propelled female athletes into the conversation, Vaccaro said.

Now being able to make money based off of the new NIL rule, female athletes have an opportunity to capitalize. Yet, being equal to their male counterparts in terms of exposure is still far behind in part due to inequities in the media. This lack of representation is perpetuating the problem.

That’s where social media comes in.

According to sports and entertainment attorney Jason Belzer, the median NIL earnings for female athletes will be more than males.

“Females are significantly more adept at leveraging social media and large followings,” Belzer said. “And 80% of the money that’s going to be in this business in NIL is going to be around social media, influencer activation. There’s clearly an advantage from that perspective.”

Like any fashion influencer or celebrity, these female athletes are poised to take advantage, and their potential earnings — based on social followings alone —  could be in the millions. LSU gymnast Olivia Dunne has more than 4 million followers on TikTok and over 1 million on Instagram, for instance. Meanwhile, Virginia volleyball player Alana Walker who has a combined 380,000 social following, has already struck a deal with Barstool Sports. Plus, the aforementioned Oregon Ducks player Prince, who has 2.5 million TikTok followers, said she plans to launch her own merch.

In an analysis conducted in June 2020 by Opendorse, a company that helps facilitate endorsement deals between athletes and brands, University of Nebraska volleyball player Lexi Sun has an annual NIL earning potential of $37,118. She has since partnered with Ren Athletics for an apparel collab.

This is just the start. The potential could be endless for stars such as Suni Lee, who just won the Olympic gold medal in women’s gymnastics all-around competition and is headed to Auburn University in the fall, or University of Connecticut Basketball’s Paige Bueckers. The latter just signed with Wasserman Media Group and in July, the Connecticut sophomore filed a trademark application for the nickname “Paige Buckets.” Bueckers has nearly 1 million Instagram followers.

“It’s an unfortunate reality that women’s sports don’t have the same amount of eyeballs as men’s sports. And as a result, you see this disproportionate pay,” said DMA United CEO Marc Beckman. “But the fact that now these individual athletes have the ability to leverage social media to bring their individual personalities to the forefront is so much more empowering and should in turn positively impact their earning potential, more so than the sports themselves.”

In addition to personal gains, experts believe women’s sports as a whole will see a boost as a result.

“NIL may help save women’s sports,” said Belzar. “Because of Title IX, that’s really the only reason why women’s sports exist in many places. But as more and more money comes into the industry, specifically around females, it is going to make it more viable without Title IX being in the picture as much.”

Increasing the visibility of female role models is critical for the future of women’s sports, said Elizabeth Kristen, director of Gender Equity & LGBTQ Rights Program and senior staff attorney for Legal Aid at Work. Already the world has seen an increase in soccer popularity as the women’s team continually make headlines for on-field success as well as their agendas off the pitch, for example.

“Why does this matter to a middle school girl? It’s really important to see a path to a future if they want to stay involved in athletics,” Kristen explained. “Having this ability to actually make money also shows younger girls and women that they can see a path to a professional career in athletics that it is not just reserved for men.”

While progress has been made, it has historically and remains to be without equity. Per a 2018-2019 survey by Female Leaders in Sport, 60% of women reported being paid less for doing the same job as a man.

“At some point there has to be balance,” said Kristen. “Even if there are lesser resources in sports, it needs to be split equally between girls and boys, because when you don’t, it sends a corrosive message to girls that they are less than, that boys are better and that message carries with them through the rest of their lives.”

For professional runner and former three-sport athlete at the University of Virginia, Stephanie Garcia, a New Balance athlete, the NIL can be a game changer, she said. She believes with female student athletes growing social followings, new audiences can be brought to women’s sports. To do that, brands need to do their part to share womens’ narratives.

“Just like the men, like there are so many great stories of overcoming and perseverance,” said Garcia. “That’s where NIL can make a difference — by letting these women be the faces of brands that they wouldn’t have been able to before.”

Big brands such as Nike and Adidas have been hesitant on making moves with individual athletes so far, as many already have partnerships with the institutions themselves, which is in turn allowing regional and local brands to take a piece of the pie.

“NIL is the single greatest grassroots marketing opportunity in history. Brands have never, ever been able to really partner with hyper local influencers,” said Belzar. “These upstart brands don’t care about the fact that athletes won’t be able to wear the shoe when they’re playing, but if they’re walking around campus with a shoe and they’re putting it on their Instagram, that’s just as valuable.”

Just like influencer marketing, college athletes need to stand out and set themselves apart from others. And these athletes don’t necessarily need millions of followers to make money.

Being the hometown hero can certainly pay off as the NIL also gives student-athletes the chance to earn off their expertise, too. In the past, they could not coach or start a camp, or speak at schools, for a fee. Now, this opens up the door for future entrepreneurs.

For Matt Laczkowski, director of athlete and talent representation at Tandem Sports agency and former UNC basketball walk-on, this local opportunity can make a major impact for all parties involved. He suggested local businesses, whether it’s a pizza joint, hotel or boutique offer team discounts or a percentage of the sales on game day.

“These places can really build up the sense of community around these kids and then these athletes are going to speak volumes for the companies, what the school did for them, what their experience was like as a student-athlete,” he said.

Like The Notorious B.I.G old adage goes: “mo money, mo problems.” Challenges are assured to arise when 18-year-olds are calling the shots.

Garcia added that while NIL has the power to do good, athletes should remember balance is key. Adding the role of an influencer to a rigorous academic schedule, on top of their sport can put these athletes at risk for injury or burnout.

“You don’t want to be the star and then you get too caught up in doing deals and creating content,” she said. “Then all of sudden you’re not getting playing time because you’re not as good or you’re slacking on the actual thing that made you a student athlete.”