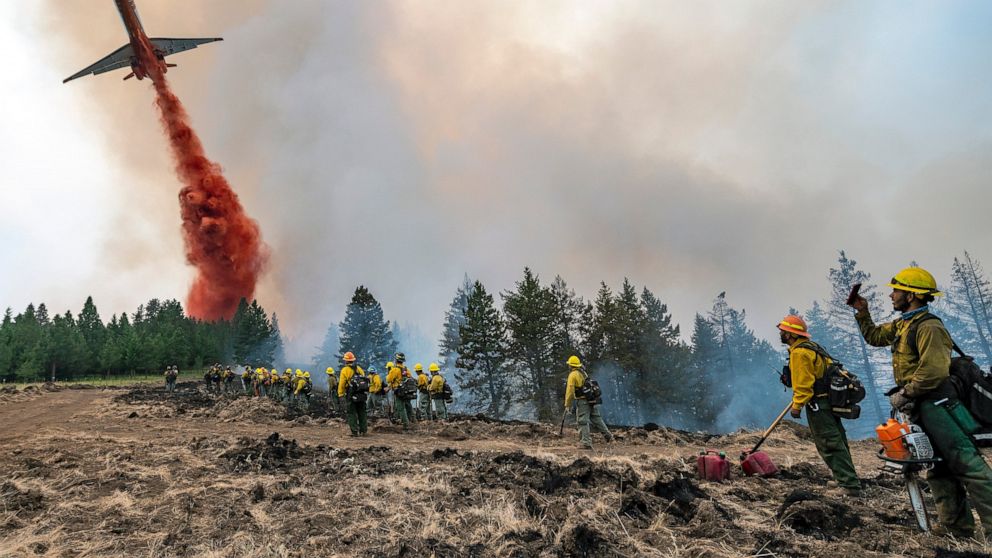 An army of firefighters is working in hot, dry and windy weather to contain blazes chewing through wilderness and burning homes across drought-stricken Western states

BLY, Ore. — An army of firefighters labored in hot, dry and windy weather Tuesday to contain fires chewing through wilderness and burning homes across drought-stricken Western states already sweltering in the second heat wave of the year.

A high-pressure system that created the intense weather was weakening, but temperatures were forecast to remain above normal on the lines of more than 60 active large blazes burning in the West and Alaska.

More than 14,000 firefighters and support personnel were attacking fires covering close to a million acres (1,562 square miles, 4,047 square kilometers) of land, according to the National Interagency Fire Center.

The largest fire in the United States was incinerating huge swaths of the Fremont-Winema National Forest in southern Oregon, where firefighters received a warning about conditions from incident commander Al Lawson.

“As you go out there today — adjust your reality,” he said. “We have not seen a fire move like this, in these conditions, this early in the year. Expect the fire to do things that you have not seen before.”

The week-old Bootleg Fire had ravaged about 316 square miles (818 square kilometers) by Tuesday morning, threatening about 2,000 homes and destroying more than 20 others, along with other minor structures. The fire’s movement prompted authorities to place additional areas under evacuation notice and expand the number of acres ordered closed on an emergency basis inside Fremont-Winema.

Scientists say climate change has made the West much warmer and drier, and they warn that weather will get wilder as the world warms. They say extreme conditions are often from a combination of unusually random, short-term and natural weather patterns heightened by long-term, human-caused climate change. However, special studies are needed to determine how much global warming is to blame, if at all, for a single extreme weather event.

Firefighters have had some success in keeping the Bootleg Fire out of several small communities.

The fire disrupted three transmission lines that provide electricity to California and the state’s power grid operator asked for voluntary power conservation Monday. The California Independent System Operator said Tuesday that the grid was stable and with the forecast for cooler temperatures another call for conservation was not expected.

In northeastern California, progress was reported on the state’s largest fire so far this year. The Beckwourth Complex, a combined pair of lighting-ignited blazes, was almost 50% contained after blackening more than 145 square miles (375 square kilometers) near the Nevada state line.

Damage was still being tallied in the rural community of Doyle, where flames swept in during the weekend. Doyle remained under evacuation orders but other areas were on warning status, meaning residents were told to be ready to leave if necessary.

A fire that began Sunday in the Sierra Nevada south of Yosemite National Park grew to nearly 15 square miles (39 square kilometers) but containment increased to 15%. Four unspecified buildings were destroyed.

Elsewhere, several wildfires burned in north-central Washington state, prompting an evacuation order for the town of Nespelem and surrounding areas. The state Department of Natural Resources said there were power outages in the area, and phone lines are down, KREM-TV reported.

A 9-mile (14.5-kilometer) stretch of Interstate 15 across the corner of northwestern Arizona reopened to traffic Tuesday after a 5 1/2-hour overnight closure due to a brush fire.