They Twice Gave Up Everything to Flee Iraq. They Keep Getting Sent Back. 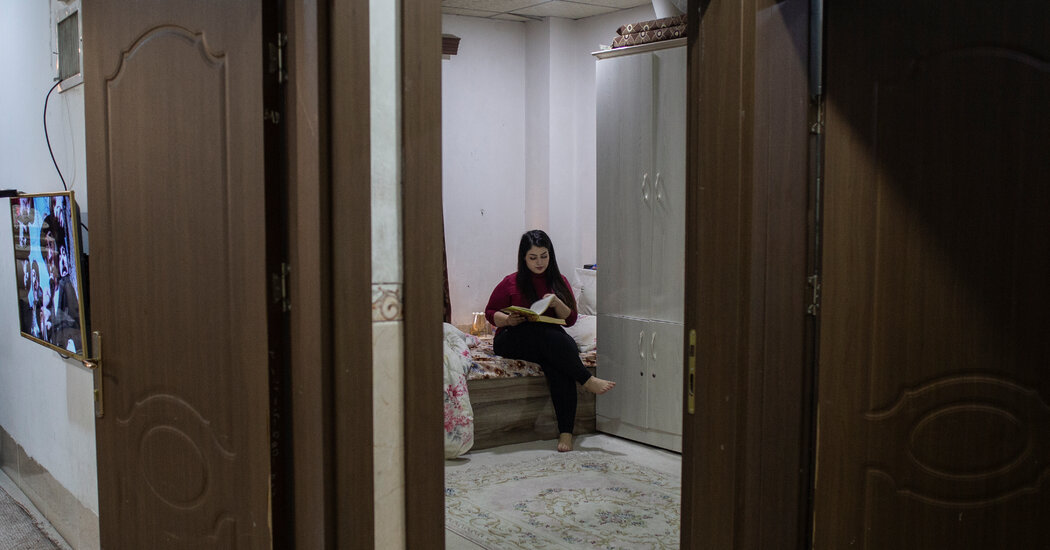 ERBIL, Iraq — In the hostile world of the video game PlayerUnknown’s Battlegrounds, or PUBG, to survive you have to parachute onto a remote island and fight to be the last one standing.

Bria Ali was a top player, so good that she was able to sell her account with its accumulated virtual weapons for $8,000. Then she used the money to try pull off another survival act: helping her family get out of Iraq.

Ms. Ali and her family are some of thousands of Iraqi migrants making desperate and at times dangerous attempts to flee Iraq’s semiautonomous Kurdistan region. As in the rest of Iraq, despair over the lack of jobs and widespread corruption, combined with efforts by Belarus to drive migrants across its borders, has encouraged a surge of Iraqis to flee for Eastern Europe in recent months.

The idea was travel to Belarus in Eastern Europe and from there make their way to Germany. But the family’s hopes came crashing down at the Warsaw airport three weeks ago when Ms. Ali, 21, her mother and her brothers were forced to board a plane with dozens of other Iraqis to be sent back to Iraq.

“I thought about breaking my fingers so they would take me to the hospital and we would be able to stay,” Ms. Ali said. “I told my brother, ‘I’ll close my eyes, and you break my fingers.’”

She and her brother, Abdulrahman Ali, 19, decided against the plan because they feared they might be separated from their mother and younger brother, who is 11. Now, they are back home with more than 2,000 other Iraqi migrants who made it to Belarus and neighboring countries in recent months only to be deported.

Like Ms. Ali’s family, the vast majority are Iraqi Kurds are following a well-blazed trail out of Iraq. Today, they are one of the largest ethnic minorities in Europe. Ms. Ali’s mother, Yadgar Hussein, had hoped they could join some extended family who were given refuge in Germany in past years.

But that door slammed shut after European countries adopted stricter measures on migrants three years ago.

The Ali family’s journey to Belarus was the second time they had tried to make it to Western Europe in six years.

For the tens of millions of Kurds spread among five countries in the Middle East and Turkey, it is common to feel like a stranger in a strange land. But Ms. Ali and her family, now back in Erbil and penniless, sometimes feel like strangers in a land that is all too familiar.

Iraqi Kurdistan was founded in the early 1990s after years of mass arrests and the state-sponsored slaughter of Kurds. Stifled by the conservative, patriarchal society, the family is convinced that they would fit in more in a place like Germany than in their own homeland.

Ms. Ali speaks English and Farsi, as well as Kurdish and Arabic. Her brothers taught themselves English from YouTube and video games.

Their mother, Ms. Hussein, 47, was married at age 13 and wants a very different life for her daughter. She was so immature when she wed, she said, that she brought her soccer ball to her new home. Five years later, with two children and a third on the way, Ms. Hussein became a widow after her husband stepped on a land mine.

Ms. Hussein remarried and had three more children: Bria, Abdulrahman and the youngest, Bureen. But after her husband took a second wife, a legal practice in Iraq, without telling her, the marriage ended in divorce.

There are days now when Ms. Hussein has to force herself to hold it all in until her children leave the house — and only then allows herself to sob, she said. Bureen is in the sixth grade, Ms. Ali attends a technical institute (though unpaid tuition has left her academic status in doubt) and Abdulrahman is also looking into classes.

The first time the family tried to flee Iraq was in 2015.

That year, Ms. Hussein sold her house to pay smugglers who led her and her children for four months across European borders, encountering obstacles that seemed straight out of a movie. In one forest near the Bulgarian-Greek border, they said, their group was threatened by a large bear as their hashish-smoking Afghan guide slept.

After finally reaching Germany, the family spent five months in a detention facility waiting for their asylum case to be decided. But home had not lost its pull.

Ms. Hussein’s father was sick. Her younger son missed his own dad. And she thought there was a chance her ex-husband might return to her.

So Ms. Hussein asked Germany to deport them.

“Bria told me I destroyed their lives,” she said earlier this week. “She said, ‘You brought us back from Germany’ — and she is right. I always try to escape that fact, but I can’t.”

As she wiped away tears, Ms. Ali. her daughter, tried to console her.

In their rented apartment in Erbil, the capital of Iraqi Kurdistan, the living room was bare, apart from a beige sectional sofa and a thin carpet, curling up at the edges.

That was more comfort than they enjoyed at the detention center in Germany six years ago, when they slept on a bare floor with no pillows and blankets, though Ms. Ali said she had been happy.

“I was imagining my future,” she said. “In my mind I was thinking that we would leave the camp, be free, study make friends and hang out. My mother would feel comfortable and people wouldn’t talk about us”

In Erbil’s conservative culture, the young woman said, she cannot have male friends or smoke shisha in cafes. And Ms. Hussein said that as a single mother she is treated suspiciously. When she or her children go out, her landlord asks where they are going.

Ms. Hussein showed me a photo taken of her in Istanbul, where they flew in September en route to Belarus. “I was happy,” she said. Sitting in her living room in Erbil, her face was drawn and her hair is thrust back into a makeshift ponytail.

On the grueling trek from Belarus to Poland, she said, she imagined the calm life that lay ahead for her in Europe. In her mind, she was in a kitchen, wearing a white chef’s hat like those sees on cooking shows.

In Belarus, they froze in the forest — at one point Ms. Hussein thought her youngest child had died of hypothermia, she said. They walked for days, trudging through deep mud and streams of sewage.

Arriving in Poland after, the family recounted, the Belarusian police cut the border fence, Abdulrahman was hidden in the trunk of a car while their panicked smuggler sped along roadways, trying, unsuccessfully, to evade police checkpoints.

After they were arrested, Ms. Hussein collapsed and spent five days in hospital.

She said she kissed the ground when she was told in court that her family would be able to stay until January while their case was decided. But 10 days later, they and about 20 other Iraqis with them were told to sign deportation documents they did not understand. One of them, reviewed by The Times, certified they were not asking for a lawyer.

Ms. Hussein said that when she hesitated, a policeman put his hand over hers and moved it on the paper to get her to sign.

Back in Erbil, the family said they are still in shock over being back in Iraq. Ms. Ali worried that without being able to pay tuition she will be kicked out of college. Even after the ordeal, Ms. Hussein and her two elder children said that they would try to get to Europe again if they could.

She has not had the heart to tell her younger son, Bureen, that everything they saved and borrowed in their desperate bid for a new life is gone.

“He asked me yesterday, ‘If we get to Germany, can I visit the United States?’” Ms. Hussein said. “He doesn’t know that the smuggler took all our money.”