They Live in an N.Y.C. Virus Hot Spot. But They Won’t Get Vaccinated. 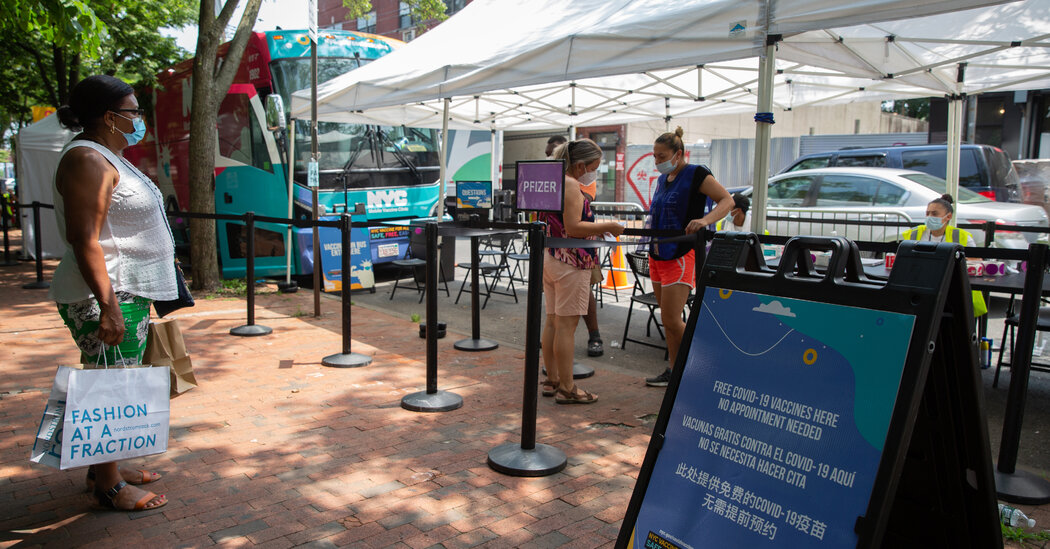 On Staten Island’s South Shore, the sole mass vaccination site — an elementary school’s gymnasium — closed down this week, and was replaced by a vaccination van that has been giving fewer than 10 shots a day.

A large vaccination site near a mid-island beach is quiet and may also shutter soon, a site director said. And at a nearby beach parking lot, the driver of a mobile coronavirus testing van was resting with his eyes closed in a reclined seat last Friday, as only two people, he said, had shown up for testing.

Across New York City, coronavirus cases have more than tripled from last month’s low of 200 per day as the more contagious Delta variant has taken hold. Staten Island, in particular, has been a hot spot that presaged the broader uptick, and for weeks, several ZIP codes in the area had among the most cases in the city.

Now, as the rise in cases has taken hold in every borough, the situation on Staten Island has shown the daunting task the city faces with its broader vaccination campaign and virus response.

And that, borough leaders say, requires a different response.

“On the South Shore, you can’t just take the boilerplate approach as with the rest of the city,” said James Oddo, the Staten Island borough president, who called the “come hell or high water” vaccine reluctance in that section of the borough deeply rooted in mistrust of government and authority itself.

On Staten Island, as in the city and state as a whole, vaccination rates are only inching up. Each day, fewer than 10,000 New York City residents on average are opting to get their first shot. Though the city has tried everything from vaccination buses and in-home vaccinations to exploring ways to better include primary care doctors, it has yet to find an effective strategy to quickly increase the numbers in the face of Delta.

Grace, 20, a Tottenville resident who did not want to give her last name, said she hasn’t gotten vaccinated. “I wouldn’t get it until it’s F.D.A. approved, and then, maybe,” she said.

She said she listens to her friends, who have told her scary stories about serious side effects, and Fox News, which she described as negative about the vaccine. “And I already had Covid,” she added.

In a statement, the city pointed to its many efforts to reach people to encourage vaccines, including radio ads and continued efforts to identify community leaders who can promote vaccination.

Serious infections are ticking up, though they remain far below previous peaks, said Dr. Nicole Berwald, the chair of emergency medicine at Staten Island University Hospital, the main hospital serving the South Shore. The hospital wards there have held between 14 and 18 Covid patients at a time recently, from a low of six in June. Almost all of them have been unvaccinated, she said.

To increase low vaccination rates in Black and Latino communities, the city has been using a strategy of working through trusted community leaders and clergy, such as by partnering with the Abyssinian Baptist Church to host a vaccination clinic in Harlem, and La Colmena, a Latino immigrant outreach organization on Staten Island’s North Shore, to increase traffic to city vaccine buses parked across the street.

But among the politically conservative on the South Shore, city officials have had trouble finding clergy or other trusted community organizations to host clinics and spread the word that the vaccine is safe and effective, said Mr. Oddo, a Republican. The borough has been working with the city to develop a new strategy that centers on primary care physicians and Staten Island University Hospital doing personalized outreach.

Some white families on Staten Island describe internal divisions over vaccination, even in the face of serious disease. On the North Shore, the 35-year-old principal of St. Peter’s Boys’ High School, Michael Cosentino, came down with Covid in June and spent a month on a ventilator. He started to improve last week, and was sent home Wednesday.

That someone so young and healthy could get so sick was a wake-up call to some close to him to get vaccinated, but not everyone. “We went through all this, and still there’s some people in my family who are unvaccinated,” his brother, Raymond Cosentino, said last week.

Some Staten Island residents have also resisted mask wearing and business closures, a stance which came to national attention with a protest in December at Mac’s Public House, a bar, that led to the owners’ arrest. But despite the challenges, borough officials believe the city could be more effective in handling the virus situation on Staten Island.

When positivity rates started to rise on the South Shore a month ago, City Hall said that it was flooding the area with resources, including canvassing and mobile vaccination and testing sites. But according to the borough president’s office, most of those efforts have flowed into the North Shore, where vaccination rates are more in line with city averages.

Two mobile vaccine vans are scheduled to arrive on the South Shore this week. One will be parked on Sunday in Tottenville, where the average positive test rate on Tuesday reached 5.8 percent, the highest in the city. Another replaced the brick-and-mortar site at St. Joseph-St. Thomas School in Pleasant Plains, but it has not been busy, administering between five and nine shots a day, a nurse there said.

Dr. Ginny Mantello, the health and wellness adviser to Mr. Oddo’s office, said in an interview last week that one reason the pop-ups have not gotten a lot of visitors may be that not enough advance warning has been given.

“I didn’t even know until yesterday where the vans were going to be,” she said last Thursday, adding that she told the city’s health department she needed more time to plan and coordinate with community groups.

“If they just show up and park in a particular neighborhood, no one is going to that van,” she said. “It takes a lot more than just coming and parking a mobile truck in a neighborhood.”

The city’s Test and Trace Corps, which has been among several agencies coordinating the efforts, has been giving as much notice as it can, said Adam Shrier, a spokesman. He added the low traffic at testing sites was consistent with downturns in testing across the city.

As a whole, New York City is in the process of switching its vaccination efforts to what it calls “the ground game.” It is closing down mass vaccination sites for lack of interest, and setting up dozens of daily pop-up sites. It is encouraging more involvement from family doctors and providers, reaching out to 140 on Staten Island alone. And it is offering home vaccination to anyone who wants it, the city said.

On Staten Island, Eli Nazario, 13, had a home vaccination visit last Friday, only two days after his father called to schedule it. Eli has serious allergies and asthma, and his family did not want him on a long bus ride to the closest vaccine site they knew about, at the Staten Island Mall, his father said.

His father, Elias Nazario, said he told his elderly neighbors in Old Town about the home visits, but they were too scared of vaccine side effects to schedule one. “They are a little cautious,” Mr. Nazario said.

The ground game, at least on Staten Island, has a long way to go, Dr. Mantello and Mr. Oddo said.

Three different city entities are involved with deploying and coordinating vaccination efforts, which can be confusing when it comes to communicating, said Dr. Mantello.

“I really don’t know who is running the show and calling the shots,” she said.

And while the Department of Health is starting one-on-one visits with South Shore primary care doctors to provide education and support, many are not ready to offer vaccines in their offices, and some are reluctant, Dr. Mantello said.

A snapshot from the shoreline in Tottenville this week was a reminder of the extent of the challenges the city faces overall. The swabber working in the mobile Covid testing van parked at Conference House Park, Jesse Henry, said he was not vaccinated. He lives in Brooklyn.

“I need more results,” he said. “If the F.D.A. is still studying it, that means it’s a conversation. Until it’s 100 percent, you don’t have my vote. I believe in Jesus. I pray a lot. I’m going with that.”