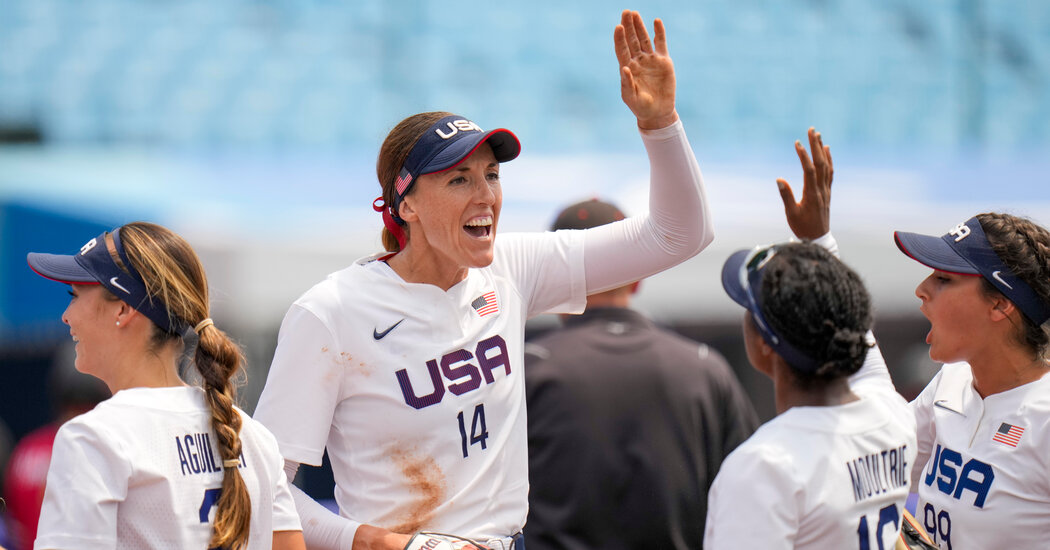 Abbott tossed a complete-game shutout, allowing just one hit, walking three and striking out nine. The day before, her fellow American ace Cat Osterman tossed six scoreless innings and struck out nine while surrendering just one hit to Italy. Abbott came in for the final inning to secure the 2-0 win.

So in two games, Osterman, 38, and Abbott, 35 — who both played in the last Olympic softball tournament, in 2008 — have combined to allow just two hits, give up three walks and strike out a whopping 21 batters.

Pumping 70-mile-an-hour fastballs, Abbott vexed Canada’s offense all game on Thursday. And when she did cough up a hit in the sixth inning, her teammates came to the rescue.

With a runner on first base, Canada’s starting pitcher, Sara Groenewegen, smacked a double into the right-center field gap. But center fielder Haylie McCleney chased down the ball and fired it to second baseman Ali Aguilar, who relayed it to catcher Aubree Munro in time to nab a sliding Joey Lye at home.

The defensive play preserved Abbott’s gem, and Ken Eriksen, the team’s head coach, stuck with her for the final inning.

On offense, the U.S. threatened with base runners throughout the game but struggled again to convert its chances. Its lone run came in the fifth inning, when McCleney reached on a one-out single and moved to second on a sacrifice bunt by Janie Reed.

Facing Jenna Caira, Amanda Chidester slapped a ball to right field for a single that scored McCleney. Standing at first base, Chidester pumped her arms and shouted toward her teammates.

No softball games are scheduled for Friday as the tournament shifts to Yokohama Baseball Stadium, closer to Tokyo. The U.S. will next play on Saturday, facing Mexico. After each team plays five games, the top two teams in the six-team field advance to the gold medal game.