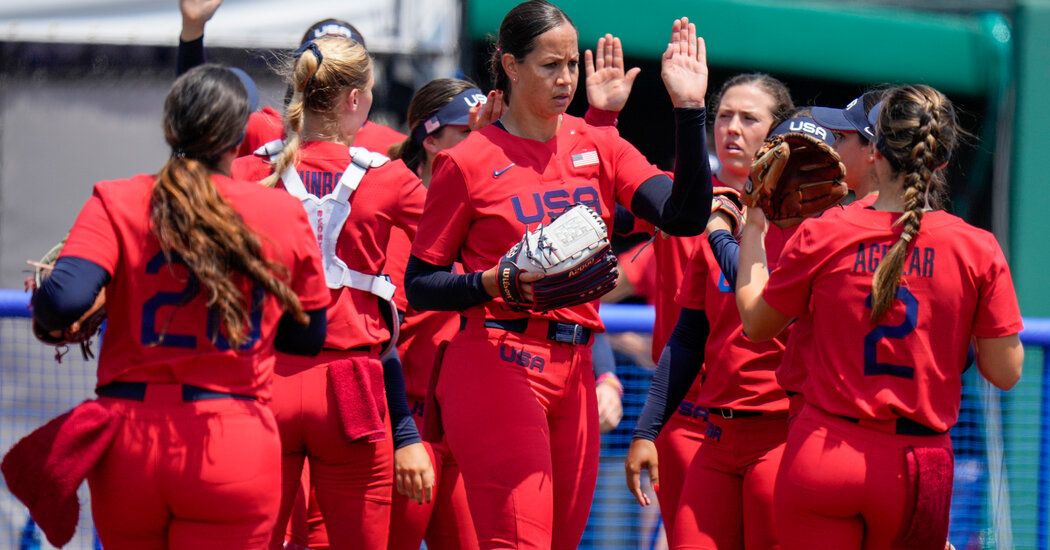 TOKYO — The U.S. softball team, behind the pitching of the ageless Cat Osterman, defeated a tenacious Italy team, 2-0, as softball returned to the Olympics on Wednesday for the first time since 2008.

Earlier, Japan, another contender for gold, got the Tokyo Games started with an 8-1 win over Australia.

Osterman, 38, who won a gold medal in 2004 and a silver in 2008, came out of retirement for these Games. She threw six of the seven innings, giving up just one hit and striking out nine.

Monica Abbott pitched the seventh and final inning for the United States and struck out the side.

Though Italy could not muster much offense, the pitching of Greta Cecchetti and Alexia Lacatena kept the game close. The United States got only five hits and scored its runs in the fourth and fifth innings on a single and a sacrifice fly.

The Japan-Australia game began with a ball and ended with a home run.

Michelle Cox, the leadoff hitter for the Australian softball team, took a low pitch from Japan pitcher Yukiko Ueno in an empty stadium in Fukushima on Wednesday in the first competitive act of the Tokyo Olympics.

The pitch — after a bit of pregame pageantry that included the introduction of several officials and dignitaries — officially kicked off an edition of the Games that was years in the making and one year delayed by the coronavirus pandemic.

It was also the last offensive highlight for Australia. Japan responded with a run of its own in the bottom of the first, two in the third and three in the fourth. And when Yu Yamamoto hit a two-run homer in the fifth inning, Japan’s lead was 8-1 and the mercy rule was invoked, ending the game.

It is not uncommon for Olympic competition to begin before the opening ceremony, a consequence of a tight schedule and expanded tournaments that can require longer than the Games’ official 17-day window to complete.