The Triassic’s Fearsome Dinosaur Was a Timid Plant Eater 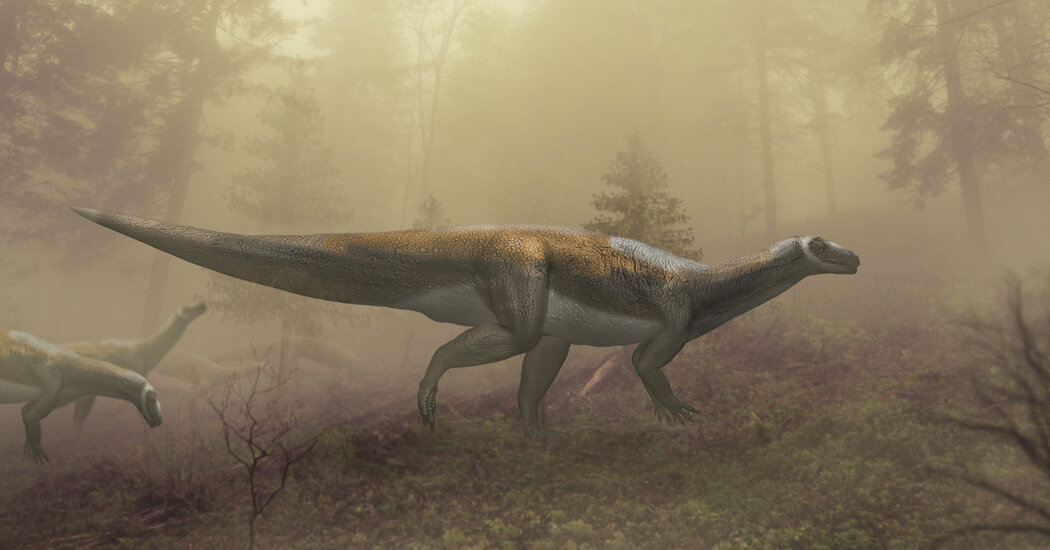 For more than 50 years, the giant fossilized footprints have been one of the most tantalizing finds in Australian paleontology.

At the time of their discovery, scientists believed the three birdlike tracks had been made 200 million to 250 million years ago by a two-legged predator. The tracks were the first evidence that dinosaurs roamed Australia in the Triassic, when the creatures first appeared on the planet.

By 2003, some paleontologists even suspected that the footprints represented the world’s earliest evidence of a giant carnivorous dinosaur, one that may have stood up to 6-½ feet high at the hip.

But new analysis has brought down this Australian idol. The tracks belonged to a smaller, meeker herbivore no taller than a person, not a ferocious giant carnivore, scientists said in a paper published Thursday in the journal Historical Biology.

While the antipodes may be losing their claim to carnivorous Triassic dinosaur fame, the prints are still a significant contribution to Australia’s paleontological record, said Anthony Romilio, a research associate at the Dinosaur Lab at the University of Queensland and co-author of the new study. The tracks likely belonged to a two-legged ancestor of the giant, long-necked, four-legged sauropods that evolved later in the Mesozoic Era.

“It’s the only occurrence of these bipedal forms of these dinosaurs in Australia,” Dr. Romilio said. Sauropods are not found again in the continent’s fossil record for about another 50 million years.

Miners laboring in a tunnel some 700 feet below the Earth’s surface near Brisbane were the first to spot the prints. As the miners excavated coal the fossilized tracks, each larger than a dinner plate, took shape in the darkness.

Reports of the mysterious tracks made their way out of the mine. In a 1964 paper on the discovery, Henry Ross Edgar Staines, a paleontologist with the Geological Survey of Queensland, and J.T. Woods of the Queensland Museum measured the biggest track at nearly 17 inches from heel to the tip of the longest toe. They declared it to be Eubrontes, a genus of fossilized footprints left by upright carnivores. A plaster cast of the print was placed on display in the Queensland Museum.

After the mine’s closure, that cast and a simple, cartoonlike drawing of the three footprints included in the 1964 paper were the only visual records of the tracks that researchers could access. Scientific publications over the years described the largest print as anywhere from 15 to 18 inches, Dr. Romilio said.

When Dr. Romilio and his colleagues analyzed the plaster cast using advanced 3-D imaging techniques, a number of discrepancies with those earlier accounts emerged. Indentations at the front of the print appeared to be drag marks left by the dinosaur’s claws, not impressions of the claws themselves. A bump near the heel that previous researchers measured as part of the foot was actually part of the rock surrounding the fossil.

Further comparisons showed the tracks shared more characteristics with Evazoum, a genus of plant-eating dinosaur prints, than the carnivorous Eubrontes: an inward-pointing gait, a shorter middle toe, splayed toes and a narrower overall foot. The researchers now believe the largest track is 13 inches long, and belonged to a dinosaur that stood about 4-½ feet high at the hip.

Ross Staines, the paleontologist who first published on the prints, died in 1996. His daughter, Dr. Roslyn Dick, believes he would have welcomed the new insight into his findings.

“My father would have been very thrilled that someone else had taken his work and done more research about the topic,” said Dr. Dick, a Brisbane dentist who said Mr. Staines always kept a geologist’s pick in the trunk of the family car for impromptu fossil digs. “Dad liked things to be well done and appreciated the scientific process to uncover the ‘truth.’”