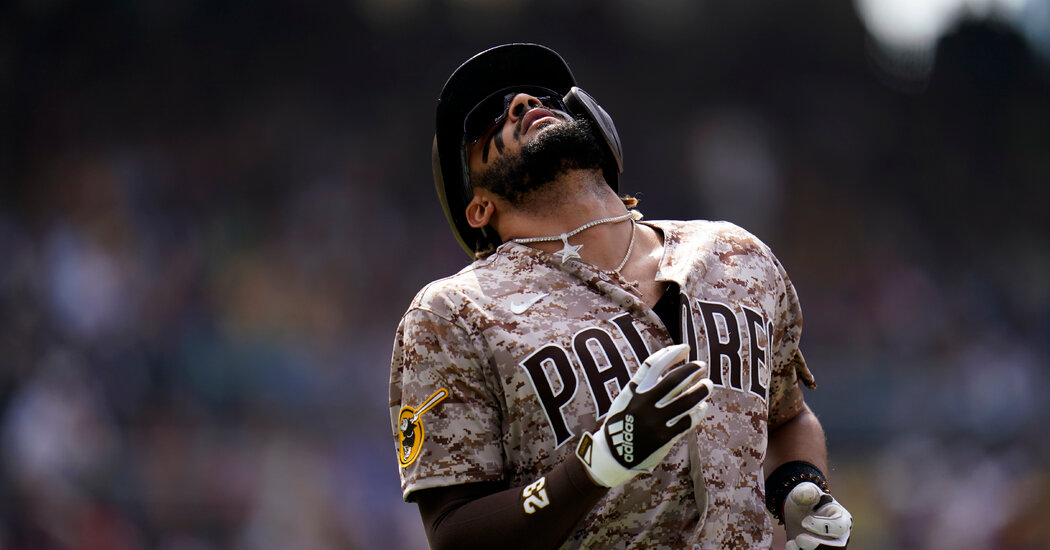 The San Diego Padres, once one of the most exciting teams in baseball but now sputtering badly, produced the type of victory on Saturday that its players had been craving, one they hoped signaled that the tide was finally turning.

After being held without a hit by the Philadelphia Phillies’ ace right-hander Aaron Nola for six innings, the Padres tied the game on a single by Manny Machado in the seventh. They then overcame the blunders of their bullpen when the All-Star infielder Jake Cronenworth smashed a game-tying two-run home run off Nola with two outs in the bottom of the ninth. An inning later, the Padres won, 4-3, when Adam Frazier darted home from third base on a wild pitch.

“The one thing I’ve noticed throughout the year when we went on these hot stretches is that they’ve always followed games in which there’s been a big hit from us,” said outfielder Wil Myers, the longest-tenured Padre, a few days before. “I really do believe we’re one big hit away, one big moment away from catching that momentum.”

Cronenworth’s blast, though, wasn’t it. On Sunday, the Padres fell, 7-4, to the Phillies, dropped their third consecutive series and fell out of the playoff picture for the first time since June 17. Then on Monday, with six weeks left in the regular season, the Padres fired pitching coach Larry Rothschild.

“We’re looking for a fresh voice, a little bit of a newer perspective down the stretch and we’re looking for more consistent production from a big group of the guys that we believe a lot in,” Padres Manager Jayce Tingler said on a video conference with reporters on Monday.

He added later, “I do believe that it’s not too late to play really good baseball and to stay in the fight and an opportunity to get into the playoffs.”

If the Padres (68-58) are going to do just that, it is going to take a dramatic turnaround. Deep into a season, contending teams don’t usually dump prominent figures who helped them reach the playoffs the year before. And teams can’t fire all of their players, especially this long after the July 30 trade deadline. So Rothschild, a former Yankees pitching coach, was sent home and his position will be filled for the rest of the season by Ben Fritz, the team’s bullpen coach.

Tingler insisted the decision to dispatch Rothschild was “100 percent” his, and that his departed coach was “definitely not a scapegoat.” But it was hard not to see the move as a desperate attempt by the Padres to right their sinking ship.

On May 30, the Padres were in first place in the National League West, and their odds of making the playoffs were at 98 percent, according to FanGraphs. Since then, they have gone 34-38 and their playoff odds have plummeted to 26 percent. Entering Tuesday, the Padres stood one game behind the surging Cincinnati Reds for the second N.L. wild-card spot, with cracks showing up and down their roster.

“We’ve been battling,” said Padres starter Joe Musgrove after Saturday’s win. “It’s definitely not a lack of effort. It’s just been a little bit of poor timing. I’m sure at this point in the year everyone’s aching a little bit, everyone’s tired. And guys are hitting those little slumps that everyone goes in. It’s just unfortunate that everyone seems to be hitting that at the same time.”

The most obvious place to start to explain the Padres’ problems is their injuries. As of the most recent update earlier this month from the injury tracking website ManGamesLost.com, the Padres led the major leagues with 1,669 total games missed because of injury. (Those numbers also included players who, for coronavirus-related reasons, landed on the injured list.)

The hardest hit unit of the Padres’ roster: the starting rotation.

On the I.L. for the second time this season, Padres ace Yu Darvish was expected back soon from a short stint away because of lower back tightness. Jake Arrieta, who coughed up five runs last week in his debut with the Padres after being cut by the Chicago Cubs, also landed on the I.L., with what was called a mild hamstring strain. Chris Paddack (out since late July with an oblique strain) and Dinelson Lamet (on his third I.L. stint with elbow or forearm discomfort) may return in September.

But even when healthy, several Padres starters were struggling. Acquired during the Padres’ frenetic and energizing off-season, the former American League Cy Young Award winner Blake Snell (4.82 earned run average) leads the major leagues with 65 walks. One of the youngest pitchers in baseball, Ryan Weathers, 21, began his rookie season with a flourish but has sputtered to a 5.27 E.RA. Paddack has failed to live up to the promise he showed during his rookie year in 2019 and has a 5.13 E.R.A.

Because of so many injuries and inconsistencies, the Padres have put an enormous strain on their bullpen. Pierce Johnson, normally a reliever, was starting for the Padres against the Los Angeles Dodgers on Tuesday, the team’s sixth bullpen game this month already.

While the Padres’ relief corps entered Tuesday with the lowest E.R.A. (3.12) in the N.L., their usage (nearly 531 innings) was the most in the league. Padres’ starters trailed only the Baltimore Orioles, who possess the worst record in baseball, for the fewest innings pitched (586 ⅓ innings) in the major leagues.

“With the guys we have injured, that’s how it’s got to be and we got to just figure it out and piece it together and see how it goes,” Craig Stammen, a reliever who was also forced to start games out of need for the first time since 2010, said on Sunday.

He added later, “It’s at that point in the season where it doesn’t matter how your arm feels or how your brain feels. You got to figure it out.”

Stammen, a veteran of 12 major league seasons, said the Padres are trying everything to turn their fortunes around. He rattled off a list: Machado recently went to the plate with no batting gloves, teammates wore different T-shirts, the team was scouting more and working harder.

Not mentioned on Stammen’s list: moving superstar Fernando Tatis Jr., who missed 22 games this season with two partial shoulder dislocations, from shortstop to the outfield upon his return on Aug. 15 as a way to help keep one of baseball’s best hitters in the lineup.

Even if more help arrives in the form of returning healthy players, the Padres have their work cut out for them. Nineteen of their remaining 36 games are against the teams ahead of them in the N.L. West: the defending World Series champion Dodgers and the San Francisco Giants, who possess the best record in baseball.

“I know that throughout many major league seasons that things go right and things go wrong,” Stammen said. “You go in slumps and you get hot. And man, we’re in a slump at what seems like the worst time imaginable. But you never know: this could turn into one of the greatest San Diego comebacks in history.”