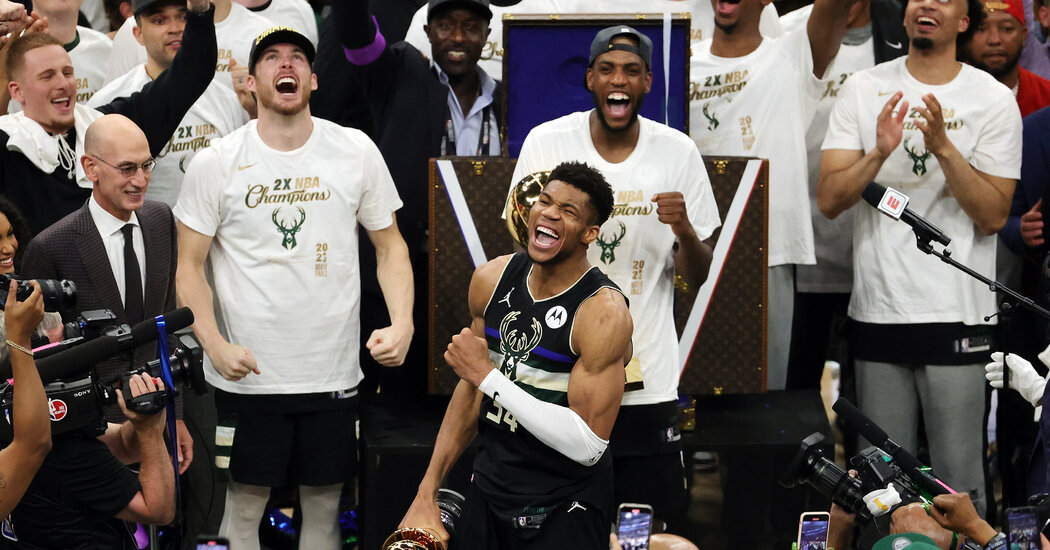 MILWAUKEE — A half century ago, Kareem Abdul-Jabbar — a young goliath then known as Lew Alcindor — led the Milwaukee Bucks to their first championship. For decades, it was the only time the franchise had reached that height.

That is, until now.

On Tuesday night, the Bucks officially capped off their return to greatness. They are once again led by a behemoth with unique skill, this one a 26-year-old player from Greece nicknamed the Greek Freak, Giannis Antetokounmpo. On its home court, Milwaukee defeated the Phoenix Suns, 105-98, in Game 6 of the N.B.A. finals to win its second championship and complete a grueling N.B.A. season of injuries and coronavirus pandemic disruptions.

The championship marked a remarkable rise for Antetokounmpo, a two-time winner of the league’s Most Valuable Player Award. He entered the N.B.A. as a rail-thin prospect, drafted outside of the top 14 picks, a grouping known as the lottery that is seen as a signifier of impending stardom. He has since established himself as one of the best players in Bucks history.

Antetokounmpo won a championship in his eighth season, filling the last glaring hole on a résumé that includes five All-Star selections and a Defensive Player of the Year Award. Top stars are often judged by the number of championship rings they have and how they won them. Antetokounmpo won his title with the franchise that drafted him, in an N.B.A. era when the best players are often on the move.

In the previous two seasons, Antetokounmpo’s Bucks finished the regular season with the best record in the Eastern Conference and were eliminated in the playoffs before the finals, raising questions about whether Antetokounmpo could be the one to truly elevate the team. Opponents exploited his below-average shooting ability.

Entering this season, there were murmurs that he might leave the Bucks in free agency. Instead, Antetokounmpo bet on Milwaukee in a big way in December by signing a so-called super max extension worth nearly a quarter of a billion dollars. He then delivered a dominant playoff run, putting to rest any doubts about his superstar status.

It helped that Milwaukee gambled and traded for Jrue Holiday, a well-regarded versatile player without the pedigree of perennial All-Star appearances. The Bucks sent a package to New Orleans typically reserved for a bona fide star, including multiple veterans and several draft picks. The gamble paid off: Holiday provided Antetokounmpo with strong help on both sides of the ball when the Bucks needed it most, particularly with a 27-point, 13-assist performance during Saturday night’s Game 5.

During this regular season, the Bucks finished third in the East, behind the Nets and the Philadelphia 76ers. Milwaukee was aided in part by the health of its key players, who largely avoided major injuries and coronavirus infections. In March, the Bucks traded with Houston to acquire P.J. Tucker, an experienced forward with a reputation as a tough defender and reliable shooter.

However, Milwaukee’s playoff run seemed on the verge of collapse on several occasions. Once again, Coach Mike Budenholzer, in his third season with the Bucks, came under withering scrutiny about his struggles to make adjustments against strong defenses or to come up with more creative ways to use Antetokounmpo. And Khris Middleton, a two-time All-Star, once again faced questions about whether he was a good enough deputy to Antetokounmpo, given his inconsistent shooting in the postseason.

In the semifinal round, the Bucks faced the Nets, who were led by the superstar trio of Kevin Durant, Kyrie Irving and James Harden. Milwaukee lost the first two games of the series, including a 39-point blowout in Game 2. But the Nets were hobbled by injuries to Irving and Harden, and Antetokounmpo turned in star performances of his own to extend the series to seven games. In the final game, a jump shot by Durant at the end of regulation came within a centimeter of ending the Bucks’ season: His toe was on the 3-point line, making the shot worth only a game-tying 2 points and not a game-winning 3. Instead, with Antetokounmpo’s 40 points and 13 rebounds, the Bucks took the series-deciding game in overtime in Brooklyn.

In Game 5 of the Eastern Conference finals against the upstart Atlanta Hawks, with the series tied at two games each, Antetokounmpo landed awkwardly and fell to the ground holding his left knee, raising fears that he would be the latest in a string of N.B.A. stars to miss time because of a serious injury. With his return date uncertain, the Bucks relied on Holiday and Middleton to win Games 5 and 6 and send Milwaukee to its first N.B.A. finals since 1974.

Antetokounmpo’s injury turned out to be only a hyperextension, allowing him to return for the championship round. In the finals, the Suns won the first two games at home, marking the third straight series in which the Bucks faced a deficit. Antetokounmpo’s 41 points during Game 3 in Milwaukee helped to turn the tide, as the Bucks won, 120-100.

In Game 4, the Bucks came back from 9 points down in the fourth quarter and evened the series behind Middleton’s 40 points. But that game will be remembered most for Antetokounmpo’s late-game block on Suns center Deandre Ayton, one of the most significant defensive plays in N.B.A. finals history.

With momentum firmly at their backs, the Bucks went back to Phoenix and put the Suns on the brink in Game 5, highlighted by an alley-oop to Antetokounmpo from Holiday at the end of the game. Entering Game 6, Antetokounmpo was averaging 32.2 points, 13 rebounds and 5.6 assists per game in the finals.