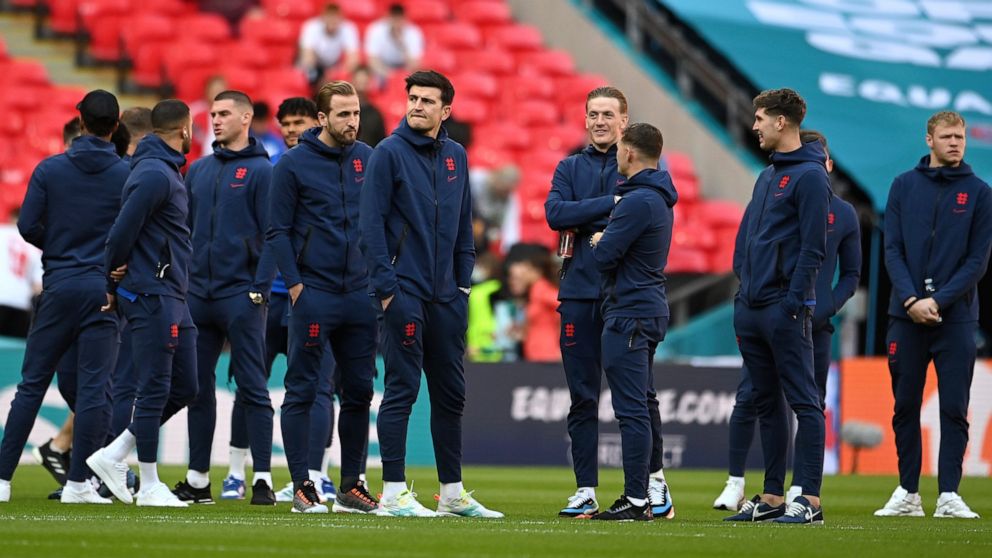 The Latest on soccer’s European Championship:

Bukayo Saka has been recalled by England for the European Championship semifinal match against Denmark as a replacement for winger Jadon Sancho.

Saka missed England’s 4-0 win over Ukraine in the quarterfinals because of a unspecified minor injury.

Denmark will field the same team that started the 2-1 win over the Czech Republic in the quarterfinals.

The England team has strolled onto the field at Wembley Stadium about 90 minutes before its European Championship semifinal match against Denmark.

The players came out wearing hoodies and tracksuits to the cheers of fans. The England band greeted them with a tune.

The winner will go on to play Italy in the final.

Fans have started coming into Wembley Stadium hours before the European Championship semifinal match between England and Denmark.

The winner of the match will play Italy in the final on Sunday.

The atmosphere was also building outside the stadium with fans lighting flares, kicking balls high into the air and singing chants like “I’m England Till I Die.” Denmark fans were in far fewer numbers and some were wearing Viking helmets and carrying Danish flags.

The mayor of Rome wants the Stadio Olimpico to be opened for fans to watch Italy in the European Championship final on the big screens.

Virginia Raggi posted a message on Twitter to the Italian Olympic committee the day after Italy beat Spain in a penalty shootout to reach Sunday’s final at Wembley Stadium in London.

She suggests projecting the final on the screens at the stadium “with a reduced capacity to respect anti-COVID measures.”

The stadium hosted Italy’s three group matches and the quarterfinal match between England and Ukraine at Euro 2020.

The Danish soccer federation has invited 40 fans to fly to London on a chartered plane to watch the country’s national team face England in the European Championship semifinals.

Soccer fans from other countries have been prevented from attending matches at Wembley Stadium this week because of coronavirus restrictions in Britain.

The Danish federation says the lucky fans that were chosen to fly on the official delegation’s flight will be in a “bubble and have no contacts with others.”

The federation also says about 7,900 tickets for the match have been sold to Danes living in Britain and it has sent about 5,000 Danish flags to them “so Wembley will be as red and white as possible.”

Nearly 60,000 fans were at Wembley on Tuesday for Italy’s penalty shootout victory over Spain in the first semifinal match. A similar number is expected for the second.

Will it be England or will it be Denmark against Italy in the European Championship final?

The two teams will play in the second semifinal match at Wembley Stadium.

England has not lost a match nor conceded a goal so far at Euro 2020 and will be playing in its national soccer stadium.

Denmark has lost two matches and lost its best player. Midfielder Christian Eriksen suffered cardiac arrest in the team’s opening match and had to be resuscitated on the field with a defibrillator. He’s now recovering at home but could attend the final.

This is the farthest Denmark has gotten at a major soccer tournament since winning the European Championship title in 1992.

The final is scheduled for Sunday at Wembley.