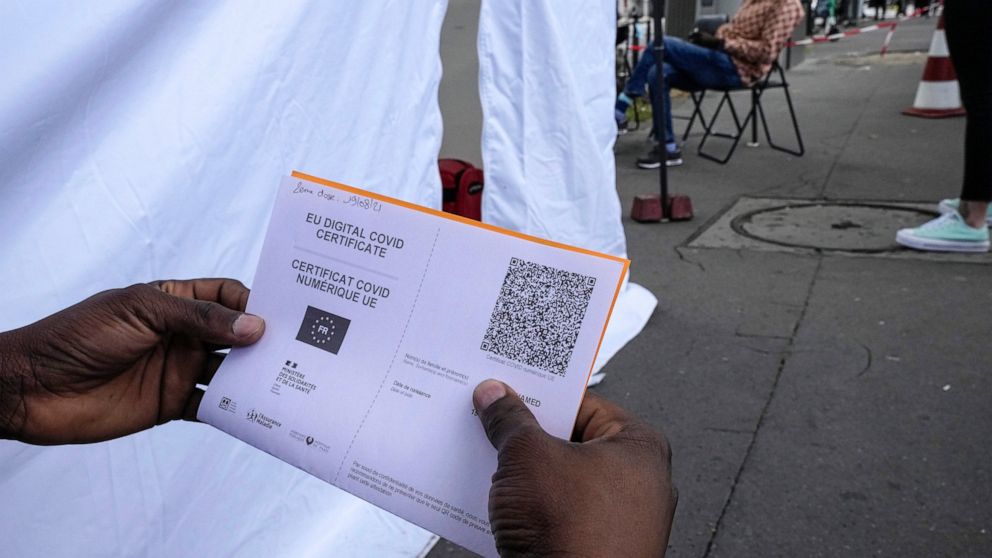 76% of reported COVID-19 vaccine side effects could be…

Omicron peaking in some countries, but no one is ‘out of the…

PARIS — France is deploying military medics and ICU units to the French Caribbean to relieve hospitals facing a coronavirus surge. Military planes are also bringing some critically ill patients to the French mainland for treatment.

The island of Martinique goes into partial lockdown Saturday. Martinique’s current infection rate is more than 1,000 cases per 100,000 people, the highest in France, according to national health agency figures.

Citing “strong tension” in hospitals in Martinique, the French Defense Ministry says 50 military medical personnel are heading to the region and the military will bring 10 ICU beds over the next week.

The rising cases are blamed in part on travel between the islands and the French mainland and summer festivities, plus a vaccination rate much lower than the mainland.

— States race to use COVID-19 vaccines before they expire

— Olympics collects vials of spit to ensure against virus spread, but such tests are hard to find elsewhere in Tokyo

LONDON — Britain’s statistics office says the rate of coronavirus infections has increased in most of the country, though the rise may be starting to level off in England.

The Office for National Statistics estimates that 1 in 65 people in England had the virus in the week to July 24, up from 1 in 75 the week before. Infection rates also rose in Wales and Northern Ireland but declined in Scotland.

The numbers reflect the first few days after remaining social restrictions, including mandatory mask-wearing, were lifted in England on July 19. Infection rates were highest among high school students and young adults, who are less likely to be vaccinated.

The data is based on a randomized sample of people across the country. Separate figures that record confirmed positive tests each day suggest infections have recently been falling.

Duncan Cook from the statistics office says, “there are possible signs that the rate of increase may have slowed” in England. But it’s too early to say “whether the current wave of infections is stabilizing or not.”

JERUSALEM — Israeli health authorities began administering coronavirus booster shots Friday to people over 60 who’ve already received both does of a vaccine, in a bid to combat a recent spike in cases.

The decision was announced Thursday by the Israeli prime minister, Naftali Bennet, making Israel the first country to offer a third dose of a Western vaccine to its citizens on a wide scale. The decision comes following rising infections caused by the delta variant.

More than 57% of the country’s 9.3 million citizens have received both doses of the Pfizer/BioNTech vaccine, and over 80% of the population over 40 is vaccinated.

The effectiveness of the Pfizer/BioNTech vaccine wanes slightly over time but it remains strongly protective for at least six months after the second dose, according to company data released Wednesday.

Neither the U.S. nor the EU has approved coronavirus booster shots. The World Health Organization said this month that there’s not enough evidence to show that a third dose is needed.

NICOSIA, Cyprus — Cyprus will start the voluntary COVID-19 vaccination of children over 12 next week, using Pfizer and Moderna shots.

Health Minister Michalis Hadjipantela says Cyprus is following other European Union countries including France, Germany, Italy and Greece. The consent of parents and guardians is a prerequisite for all kids’ vaccinations.

Hadjipantela urged young people to get the shot, which he says is the only way to head off the spread of COVID-19 and guard against new variants. The median age of those infected in the last 14 days is 28.

Cyprus in the last month has witnessed cases spike to their highest levels since the start of the pandemic.

There’s been more than 98,000 cases, corresponding to more than 10% of the east Mediterranean island nation’s population. Confirmed deaths stand at 415, with more than 80 people are currently hospitalized in serious condition.

BERLIN — In a bid to whet reluctant Germans’ appetite for the coronavirus shot, one vaccination center is offering a free bratwurst to all comers.

Public broadcaster MDR reported 100 people had turned up at the center in Sonnenberg during the first 4 hours Friday, a higher rate than usual. Sonnenberg is located in Thuringia state, which prides itself on its bratwurst tradition.

Official figures show 61% of the population in Germany has received at least one shot, and 51% are fully vaccinated.

But vaccination rates have slowed in recent weeks, prompting calls to offer incentives for more people to get the shot. They’ve ranged from free food and drinks to easing restrictions for people who can prove they’ve been inoculated.

Saudi Arabia will reopen its borders to tourists on Sunday for the first time in 18 months after imposing restrictions at the start of the pandemic to curb the spread of the coronavirus.

The historically closed-off kingdom introduced electronic visas for tourists in late 2019, just before the pandemic struck.

Saudi Arabia is looking to rebrand itself as a unique tourist destination for nature lovers and curious travelers as a way to boost non-oil revenue and create more jobs.

Citizens of 49 mostly European countries, as well as the U.S. and China among others, will be allowed to enter the kingdom under the new rules without quarantine if they provide a negative PCR test before travel and have vaccine certificates proving two doses of the Oxford/Astra Zeneca, Pfizer/BioNTech or Moderna vaccines, or a single dose of the vaccine produced by Johnson & Johnson.

Travelers vaccinated with the Chinese Sinopharm or Sinovac vaccine must have received a third dose of one of the other vaccines.

Earlier this week, the kingdom warned that any citizen who travels to red-listed countries, such as the neighboring emirate of Dubai where the delta variant is present, could face a three-year travel ban.

NEW YORK — U.S. health officials are expected to release new data about the spread of COVID-19 on Friday that led to their decision to recommend that vaccinated people wear masks in some situations, a reversal of previous guidance.

The report, to be released by the Centers for Disease Control and Prevention, comes from a recent investigation of a coronavirus outbreak in Provincetown, Massachusetts, according to a federal official who spoke on condition of anonymity because they were not authorized to disclose the plan.

Earlier this week, the CDC changed its masking guidelines, recommending that even vaccinated people return to wearing masks indoors in parts of the U.S. where the delta variant of the coronavirus is fueling surges in new cases.

Citing new – but unreleased — information about the variant’s ability to spread among vaccinated people, the CDC also recommended indoor masks for all teachers, staff, students and visitors at schools nationwide, regardless of vaccination status.

CHARLESTON, W.Va. — West Virginia will offer free antibody tests to some fully vaccinated people to study whether some elderly and immunocompromised individuals should receive a booster shot.

State officials said they are following the lead of Israel, which said Thursday fully vaccinated people older than 60 would be offered a booster.

West Virginia will offer the testing for residents age 60 and older, particularly those living in nursing homes, who received their final vaccine dose at least six months ago.

If their antibody levels are low, a booster shot may be recommended. The move comes as the more contagious delta variant takes a hold in the United States, leading to the return of mask mandates in some parts of the country.

LITTLE ROCK, Ark. — Arkansas’ Republican governor is calling lawmakers back to the Capitol to lift the state’s ban on mask requirements in public schools.

“This is not a debate about mask mandates for those that can make their own decisions and have the means to get vaccinated,” Hutchinson said a news conference at the state Capitol. “This is a discussion about the school environment where schools can make decisions about the public health for their school environment and the children they have responsibility to protect.”

Hutchinson also declared a new emergency, two months after ending the declaration he’d put in place at the start of the pandemic last year.

Arkansas’ coronavirus cases have skyrocketed because of the delta variant and the state’s low vaccination rate. The state reported more than 2,800 new cases on Thursday.

The Republican, speaking to reporters, blamed the Democratic president for not doing enough to push the Food and Drug Administration to upgrade their emergency authorization for the vaccines to a permanent authorization. Kemp said urging people to use masks again is a “mixed message” that could discourage vaccination.

The governor reiterated his call for people to get vaccinated against the disease, saying he would only seek other solutions if Georgia hospitals began to get overwhelmed. Georgia ranks in the bottom 10 states for vaccination rates.

“We know that the vaccines work,” Kemp said. “I want to encourage people to get vaccinated if you’re comfortable doing that.”

76% of reported COVID-19 vaccine side effects could be imagined, phenomena called the…

Omicron peaking in some countries, but no one is ‘out of the woods yet’: WHO –…