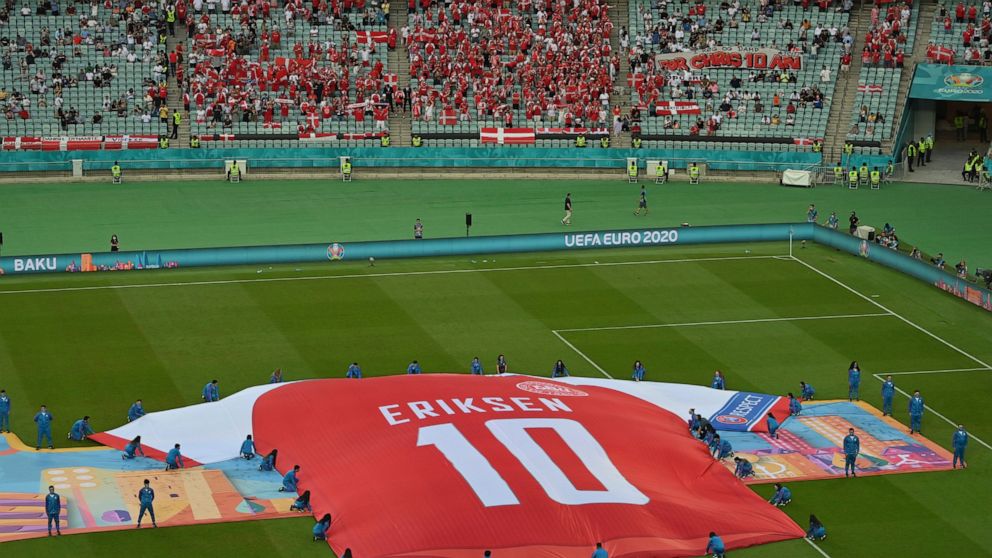 The Latest on soccer’s European Championship:

Thousands of flag-waving and flag-wearing Italy and Spain fans living in Britain have flocked to Wembley Stadium to see their teams play in the European Championship semifinals.

Fans from abroad are not permitted into the match unless they have followed the strict quarantine rules imposed by the British government.

That allowed the many Italians and Spaniards living in the country to take advantage of more easily available tickets. They have arrived in droves and have been loudly singing and chanting outside the stadium.

Spain fan Melissa Russell Escrichuela and her friends decided only on Saturday to buy tickets.

The 25-year-old business analyst says “it started almost as a joke and then we saw there were tickets. So we said let’s do it.”

Three of her group are Spanish and one is Italian.

UEFA has invited Denmark midfielder Christian Eriksen to the European Championship final along with the medics who helped to save his life.

Eriksen collapsed on the field during his team’s opening match against Finland on June 12 after suffering a cardiac arrest. He had to be resuscitated with a defibrillator.

Denmark will play England in the Euro 2020 semifinals on Wednesday. The final is scheduled for Sunday.

Italy and Spain will face each other in a knockout match at the fourth straight European Championship.

Spain beat Italy at Euro 2008 and Euro 2012 and went on to win the title each time. The Italians won five years ago at Euro 2016 but then lost to Germany in the quarterfinals.

The Euro 2020 semifinal match will be played at Wembley Stadium in London.

The winner will face either England or Denmark on Sunday in the final. That match will also be played at Wembley.