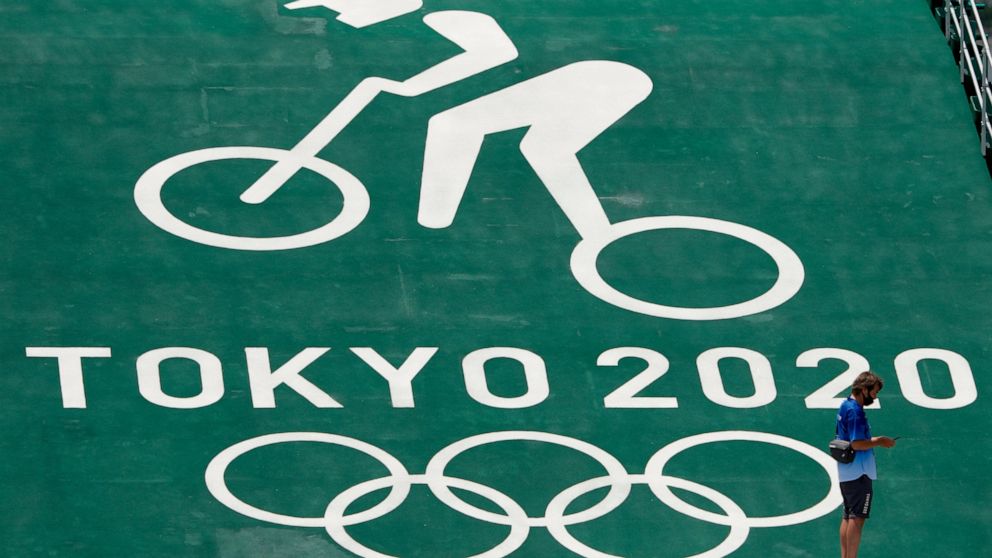 Australia has evened its record to 1-1 in Olympic softball with a 1-0 victory over Italy in Olympic softball. Jade Wall hit a run-scoring single in the second inning and Kaia Parnaby took a three-hitter into the seventh. Australia is fourth among the six teams after an opening loss to Japan, and Italy fell to 0-2.

Taylah Tsitsikronis doubled off Greta Cecchetti leading off the second, advanced on Tarni Stepto’s groundout and scored on a two-out infield hit by Wall, who beat the throw to first after second baseman Andrea Filler’s diving, backhand stop.

Ellen Roberts, who played college ball for Memphis, made her Olympic debut after Parnaby had thrown 85 pitches, and Marta Gasparotto took a called third strike.

American beach volleyball player Taylor Crabb is out of the Olympics after four positive COVID-19 tests, and Tri Bourne will take his place as the partner of four-time Olympian Jake Gibb when the competition begins this weekend.

Crabb confirmed his withdrawal Thursday in a statement to The Associated Press, noting that he was vaccinated and tested negative before he left the United States but tested positive when he arrived in Japan.

“I’m symptom-free, thankfully, but deeply disappointed to not be able to join Jake on the sand and compete as a member of Team USA,” Crabb said. “I want Jake to play in his fourth Olympic games and I want him to bring home a medal. Tri Bourne, an incredible athlete, person and close friend will be competing alongside Jake and filling my spot on Team USA.”

The Olympic beach volleyball tournament begins Saturday at Tokyo’s Shiokaze Park, with Gibb and Bourne scheduled to play their first match on Sunday night against Italy.

The International Olympic Committee says it will start including images of athletes taking a knee in its official highlights reels and social media channels.

Players from five women’s soccer teams kneeled in support of racial justice Wednesday, the first day it was allowed at the Olympic Games after a ban lasting decades.

But those images were excluded from the official Tokyo Olympic highlights package provided by the IOC to media including The Associated Press that could not broadcast the games live.

Official Olympic social media channels also did not include pictures of the athlete activism.

“The IOC is covering the Games on its owned and operated platforms and such moments will be included as well,” the Olympic body said Thursday in an apparent change of policy.

Host Japan beat Mexico 3-2 in softball to improve to 2-0 at the Tokyo Games.

Haruka Agatsuma’s grounder to second off Danielle O’Toole advanced Yamada to third, and Atsumi bunted on a 0-1 pitch. Yamada was running on the pitch and slid home ahead of Amanda Sanchez’s throw.

Mexico, 0-2 at its first Olympics, tied the score 2-2 when Yamada dropped Anissa Urtez’s fly to center in the seventh inning for what was ruled a single.

One of the social media sensations of the Rio Olympics won’t be competing in Tokyo. Namibia’s Dan Craven tested positive for COVID-19 in Spain, where the former professional cyclist lives with his family.

Even more devastating was the timing of it.

Craven told The Namibian newspaper that he had been trying to receive a COVID-19 vaccine through Spain’s national health care system, “but the bureaucratic system to get registered has just been crazy.”

“Two hours after I tested positive,” Craven said, “I got a phone call saying I can come in for my vaccine.”

The tall, lanky rider with the bushy red beard said on his Instagram page that he caught the virus on a training ride with three other people. He was supposed to have the single starting spot for Namibia, where he was born, but tested positive in a pre-event test and will be replaced in Saturday’s race to Fuji International Speedway by Tristan de Lange.

Skateboarder Candy Jacobs of the Netherlands and table tennis player Pavel Sirucek of the Czech Republic tested positive and had to leave the village to enter a quarantine hotel.

The 91 cases do not include athletes who tested positive at home before their scheduled travel to Tokyo for events they will now miss.

The United States beat Canada 1-0 for a 2-0 start in Olympic softball.

Monica Abbott pitched a one-hitter and center fielder Haylie McCleney and second baseman Ali Aguilar combined to throw out the potential tying run at the plate in the sixth inning.

The Americans are getting just enough offense as they try to regain the gold medal they lost to Japan in 2008.

Amanda Chidester hit an RBI single in the fifth off loser Jenna Caira that scored McCleney, who went 3 for 3 with a walk and has reached base seven times in the two games.

The Tokyo Olympic organizing committee has fired the director of the opening ceremony because of a Holocaust joke he made during a comedy show in 1998.

Organizing committee president Seiko Hashimoto says opening ceremony director Kentaro Kobayashi has been dismissed. Kobayashi was accused of using a joke about the Holocaust in his comedy act, including the phrase “Let’s play Holocaust,” in one of his shows.

His dismissal comes the day before Friday’s opening ceremony of the pandemic-delayed Games.

Earlier this week, a composer whose music is expected to be used at the opening ceremony was forced to resign because of past bullying of his classmates, which he boasted about in magazine interviews.

Home hope Naomi Osaka will face 52nd-ranked Zheng Saisai of China and Novak Djokovic will play 139th-ranked Hugo Dellien of Bolivia in the opening round of the Olympic tennis tournament in Tokyo.

Osaka is returning to competition after she withdrew from the French Open following the first round to take a mental health break.

Djokovic is attempting to become the first man to complete a Golden Slam by winning all four major tennis tournaments and an Olympic singles gold medal in the same year.

Russian swimmer Ilya Borodin, the European champion in the 400-meter individual medley, will miss the Tokyo Olympics after testing positive for the coronavirus.

The Russian Swimming Federation says Borodin tested positive at a training camp in the city of Vladivostok in the Russian Far East.

The positive test came shortly before he was expected to travel to Japan with other Russian swimmers.

Federation vice-president Viktor Avdienko tells the Tass state news agency that Borodin has been placed into isolation, the rest of the team has tested negative and no one was deemed a close contact in Borodin’s case.

Jill Biden has embarked on her first solo international trip as first lady, leading a U.S. delegation to the Olympic Games in Tokyo.

On her way she stopped in Alaska, where she praised efforts to vaccinate residents in the rugged, remote state but noted the work is not done.

She has a robust agenda for roughly 48 hours on the ground in Japan’s capital.

She is set to arrive in Tokyo Thursday afternoon and have dinner with Prime Minister Yoshihide Suga and his wife, Mariko Suga.

She will hold a virtual get-together with members of Team USA Friday before meeting Emperor Naruhito at the Imperial Palace. She attends the opening ceremony for the Games in the evening.

She also will host a U.S.-vs.-Mexico softball watch party at the U.S. Embassy for staff and their families, and cheer U.S. athletes competing in several events before leaving Tokyo.

Australia’s highest-ranking Olympic official and the current premier of the state of Queensland, where the 2032 Summer Games will be held, have put an early test to the old adage that sports and politics don’t mix.

Hours after Brisbane was given the hosting rights for the Games 11 years down the track following an International Olympic Committee vote in Tokyo on Wednesday, Australian Olympic Committee President John Coates had a public disagreement with Queensland state Premier Annastacia Palaszczuk.

The issue at the late night news conference in Tokyo? Whether Palaszczuk and other members of the city’s delegation should attend the Tokyo Olympics opening ceremony on Friday.

Palaszczuk indicated she’d be staying in her hotel room.

That didn’t sit well with Coates, a powerful vice-president for the IOC and one of the driving forces behind Brisbane having received the hosting rights so soon without any real competition.

Coates told Palaszczuk that she and the others could not stay home and sit in their rooms.