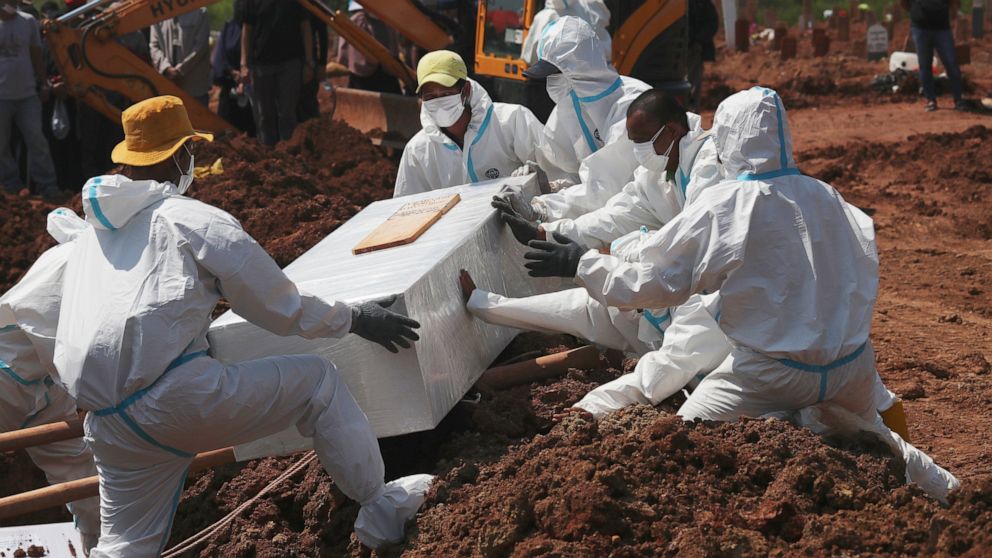 Omicron COVID-19 cases appear to have peaked — but…

CANBERRA, Australia — AstraZeneca has backed the advice of Australia’s immunization expert body that Sydney residents should take any COVID-19 vaccine they can get.

The Australian Technical Advisory Group on Immunisation, known as ATAGI, recommended on July 13 that adults under the age of 60 take Pfizer because of the increased risk in younger adults of blood clotting caused by the AstraZeneca vaccine. Pfizer and AstraZeneca are the only COVID-19 vaccines registered in Australia.

But with a delta variant cluster growing in Sydney since mid-July, ATAGI on Saturday recommended adults in Australia’s largest city as young as 18 “should strongly consider getting vaccinated with any available vaccine,” including AstraZeneca.

AstraZeneca on Monday said it supported ATAGI’s advice, adding that regulatory authorities around the world agreed that the benefits of using the vaccine significantly outweighed the risks across all adults age groups.

Australia has abundant stocks of locally-manufactured AstraZeneca, but imported Pfizer is in short supply.

Because Australia has been relatively successful in containing COVID-19 outbreaks before the more contagious delta variant arrived in Sydney with a U.S. air crew, many Australians are prepared to wait months for Pfizer rather than risk AstraZeneca.

— Fauci says US headed in ‘wrong direction’ on coronavirus

NEW DELHI — Life has been tentatively returning to normal in India as coronavirus cases declined. But, for many, the worst may lay ahead as they deal with the crushing financial aftermath of huge piles of medical bills.

Most Indians don’t have health insurance and costs for COVID-19 treatment have left them drowning in debt. In New Delhi, a father is pleading online for help from strangers on a crowdfunding website after his son’s medical bills surpassed $50,000. In the northeastern town of Imphal, a woman is facing a similar struggle after losing her sister, her mother and the family’s savings to the pandemic.

Experts say such losses are bound to hinder a revival of the country’s battered economy. The pandemic has devastated India’s economy, bringing financial calamity to millions at the mercy of its chronically underfunded and fragmented healthcare system.

Indians pay about 63% of their medical expenses out-of-pocket. That’s typical of many poor countries with inadequate government services. Data on global personal medical costs from the pandemic are hard to come by, but in India and many other countries, treatment for COVID-19 is a huge added burden at a time when hundreds of millions of jobs have vanished.

PARIS — While most French health care workers are vaccinated against the virus, a small but vocal minority is holding out. With infections exploding, a new law requiring them to get the shots is exposing the divide.

The French government, which has declared that the nation has officially entered its “fourth wave” of the pandemic, pushed the law mandating COVID-19 vaccines for health care workers, to protect hospitals and avoid a new lockdown. Government spokesman Gabriel Attal says the move isn’t meant to stigmatize reluctant health care workers but to limit risks to the vulnerable people they care for.

The law, adopted by parliament early Monday, also sets up a “health pass” for everyone in order to access restaurants and other public venues. Both measures have prompted intense debate and two straight weekends of protests around France. Health care workers in white coats have been among the demonstrators.

Many cite incorrect information about the vaccines circulating on the internet, worry about their long-term effects or want more time to decide. Several health workers said they took issue with the mandate, not the vaccines themselves.

At one Paris protest, some carried signs reading “My body, my choice,” and a health worker dressed as the Statue of Liberty called it an “act of violence” to force people to get vaccinated.

BEIJING — New coronavirus cases continue to grow in the major eastern Chinese city of Nanjing, with another 38 reported on Monday, bringing the total to more than 60 over recent days.

Tens of thousands of people are under lockdown and authorities are conducting mass testing of the population, standard practices in China that have generally been successfully in controlling the spread of the virus.

One other case of local transmission was reported in the nearby city of Suqian and one in the northeastern province of Liaoning. Both were classified as being linked to the Nanjing outbreak.

Another 36 imported cases were reported, half of them in Yunnan province near the border with Myanmar, which is facing a severe outbreak. All those newly diagnosed in Yunnan had crossed the border from Yunnan at some point before June 30 and July 24.

China has recorded 87,228 total cases since the initial outbreak in the central city of Wuhan in late 2019, with 741 currently in treatment. The death toll has stayed steady for months at 4,636.

Police spokesman Ajith Rohana said Monday that intelligence officers had reported some people do not wear face masks at public places while some fail to wear it properly.

Rohana said such people “are dealt with according to quarantine laws” and will be arrested and produced before courts.

Under Sri Lanka’s quarantine laws, those who are arrested for not wearing face masks and also not maintaining social distancing in public could face a penalty of LKR 10,000 ($54), six months’ imprisonment or both.

The move comes as health officials warn of a rise in COVID-19 cases nationwide.

Sri Lanka has seen a sharp increase in positive cases and deaths since April, in part because of celebrations and shopping during the traditional new year festival. Total confirmed cases have reached 294,850 with 4,054 fatalities.

The Ifo institute’s business confidence index declined to 100.8 points in July from 101.7 a month earlier. It was the first decline since January. Economists had expected an increase to 102.5.

While managers’ assessment of their current situation improved, their outlook for the next six months worsened significantly. Ifo said that their optimism was clouded by problems with the supply of raw materials and other products and by an upturn in coronavirus infections.

Germany’s infection rate remains very low compared with some other European countries, but it has been rising steadily since it bottomed out in early July. The increase is being fueled by the more contagious delta variant, which is now dominant.

The Ifo survey is based on monthly responses from about 9,000 companies across the German business spectrum.

He said recommending that the vaccinated wear masks is “under active consideration” by the government’s leading public health officials. Also, booster shots may be suggested for people with suppressed immune systems who have been vaccinated, Fauci said.

Fauci, who also serves as President Joe Biden’s chief medical adviser, told CNN’s “State of the Union” that he has taken part in conversations about altering the mask guidelines.

He noted that some local jurisdictions where infection rates are surging, such as Los Angeles County, are already calling on individuals to wear masks in indoor public spaces regardless of vaccination status. Fauci said those local rules are compatible with the Centers for Disease Control and Prevention recommendation that the vaccinated do not need to wear masks in public.

LONDON — Chaos and confusion over travel rules and measures to contain fresh virus outbreaks are contributing to another cruel summer for Europe’s battered tourism industry.

But the patchwork and last-minute nature of the efforts as the peak season gets underway threatens to derail another summer.

Visitors to cultural and tourist sites in France were confronted this week with a new requirement for a special COVID-19 pass.

Italy has said that people will need a similar pass to access museums and movie theaters and dine inside restaurants and cafes.

3,535 people in Ontario hospitals with COVID, 607 in intensive care