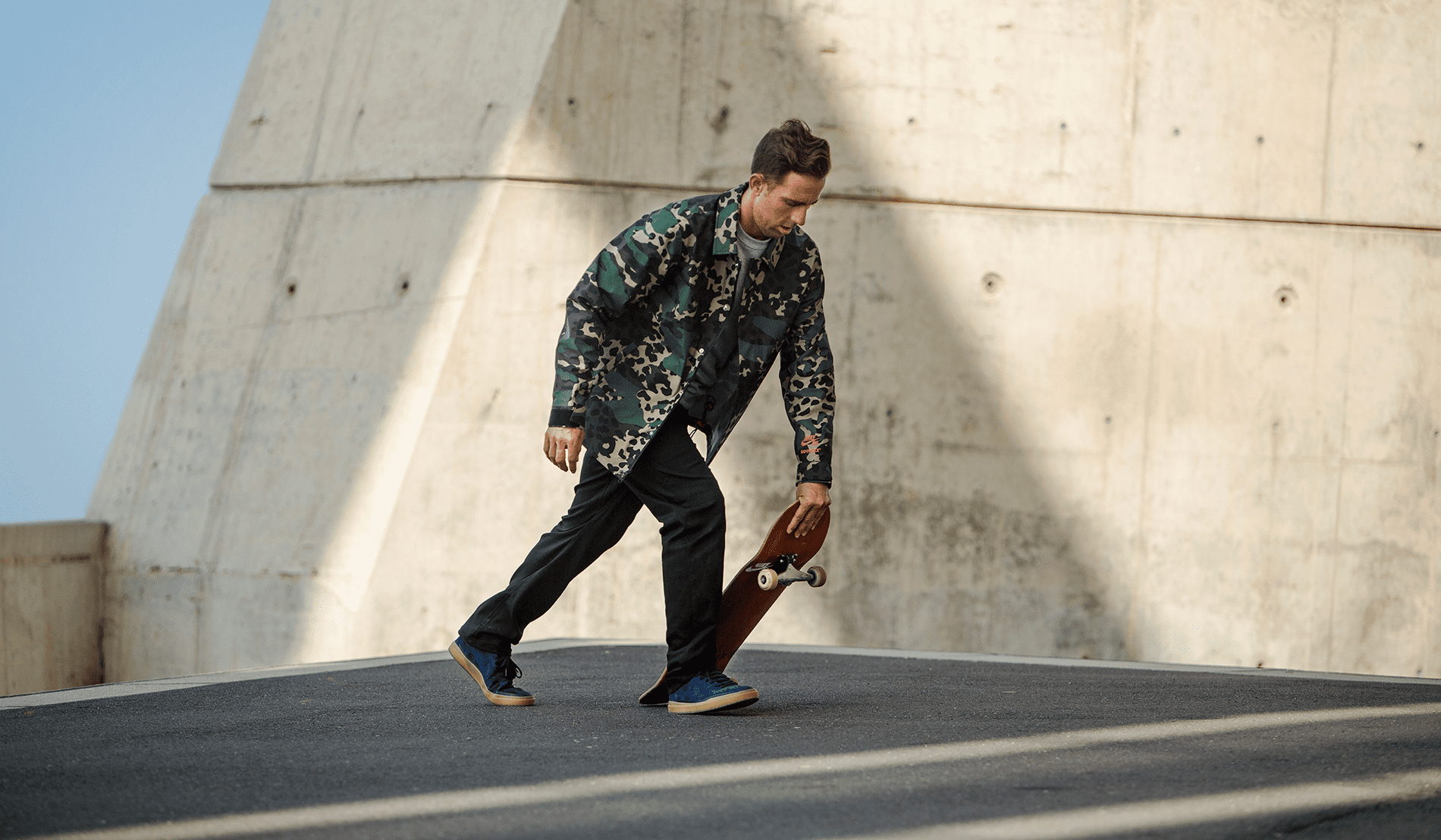 Skateboarding and men’s fashion have never been more closely intertwined. Historic haute-couture houses are making signature shoes for pro skaters, skateboard labels are putting out frequent collabs with high-fashion brands, and everyone from Valentino to Louis Vuitton has used skaters to front their campaigns.

It’s reached a point where some of the best skate brands hold more clout than their high-end counterparts. Want to pick up a Supreme trench coat? Expect to pay Burberry prices and above on the resale market. Heading to a Paris Fashion Week show? Don’t be surprised to see certain pro skaters and label owners peppering the front row.

To put it simply, these brands have transcended the skateboarding world to infiltrate high fashion and everyday wardrobes alike. If you don’t already know about them, you should. Below are a few of the most notable skate labels around right now and the reasons why they deserve to be on your radar.

New York City’s Supreme began life as a skate shop in 1994, but its in-house label quickly gained a cult following. The brand produces its collections in small runs, meaning that items are often highly limited. This, combined with founder James Jebbia’s knack for creating a stir, has turned Supreme into one of the most hyped labels on the face of the earth.

The brand releases two collections a year, with select pieces dropping in-store and online every Thursday. It’s not uncommon to see queues of teenagers snaking out of the front door on a drop day, particularly when it’s one of Supreme’s obscure novelty items (A brick? Really?) or a high-profile collab that’s hitting the shelves.

Speaking of which, there are a number of highly influential team ups that have helped the brand transcend its skateboarding roots. The long-running partnership with The North Face being a prime example. Or the famous Louis Vuitton hookup, which marked a pivotal moment in streetwear’s transition to high fashion.

Palace brought a distinctly British flavour to the skateboarding world when it launched in 2009. The London-based brand is known for its tongue-in-cheek sense of humour, cultural references and witty webshop captions. In terms of the way it operates, though, it’s often talked about as the UK’s answer to Supreme, producing highly limited runs that are released via regular drops.

It also shares its transatlantic cousin’s high-fashion link. Team riders Blondey McCoy and Lucien Clarke have modelled for the likes of Louis Vuitton and Burberry, and there have been lots of high-profile collabs over the years – Ralph Lauren, Moschino, Salomon, Rapha and Arc’teryx to name a few.

Hailing from Montreal, Canada, Dime is a skate label born from a pure love of skateboarding. Founders Antoine Asselin and Phil Lavoie simply wanted to earn a living doing the thing they love, and having accepted the fact that neither of them were going pro anytime soon, they decided this was the next best thing.

The brand is known for its sense of humour and colourful designs, but it’s also a label influenced by the cold climate it was founded in. Thanks to this, you can expect to see thick fabrics, puffer jackets, fleece and heavy flannels on the rails. At its core, it’s loose-fitting, hard-wearing gear that’s perfect for skating but looks great too.

Sweden’s Polar Skate Co. brings together Scandi minimalism and playful graphics to create something totally unique. It’s a quintessentially Swedish skate brand with a strong independent spirit, and founder Pontus Alv has previously said that he wanted to create a label that treated his sport with reverence rather than as a commodity.

It’s a real skateboarder’s skate brand, and this is evidenced in the clothing. Take the best-selling Surf Pants for example: they’re heavy, loose-fitting and feature a tapered leg and elasticated waist. In other words, they’re built to skate, it’s just a happy accident that they look great too.

Noah may not be a purebred skate label, but it has strong skate influences. Founder Brendon Babenzien cut his teeth as creative director of Supreme and his own label still has strong ties to the skateboarding world.

The New York label offers eclectic collections that run the gamut from traditional ‘streetwear’ staples, like hoodies and logo tees, to preppy pieces like blazers, collegiate knitwear and loafers. It may sound like an odd mix, but it works, and, in our opinion, makes Noah one of the coolest and most original labels out there.

Vans is a skate brand that should need no introduction. Easily one of the most recognisable labels in the world, it emerged from the early skate scene in 1970s California and promptly began churning out some of the most iconic footwear silhouettes of all time. It’s appeal goes far beyond the realms of skateboarding, and although its shoes are still popular with skaters, models like the Old Skool, the Authentic and the Sk8 Hi have proven to have huge crossover appeal.

Blondey McCoy first came onto the scene as a teenage poster boy for the likes of Palace and Slam City Skates. His career has been on an uphill trajectory since then, modelling for high-fashion labels like Burberry and Valentino, and releasing signature shoes with Adidas.

Even with all of that going on, Blondey hasn’t been too busy to nurture his own brand. He started the Thames label when he was 14 and it’s been going strong ever since, offering a range of typically ‘Blondey’ pieces like V-neck knitwear, rugby shirts, jewellery and the odd skateboard deck too.

Amsterdam’s biggest and best skate brand didn’t actually start life as a skate brand at all. At its outset in 2013, it was a distributor for other labels, but quickly became a big success in its own right.

Pop Trading Company makes all the standard skateboard-brand fare – the hoodies, the tees, the relaxed-fit pants – but it also has a knack for tweaking classic menswear silhouettes. It all adds up to a range that’s extremely wearable, whether you spend your weekends in skateparks, city bars or both.

New York skate label Bronze 56k started life as an in-joke between friends. They posted mocked-up photos of clothing on their social media channel without any intention of actually making the things they were designing. But when the demand became clear, they set about putting their work into production.

It was a collab with Palace in 2015 that really sent the label stratospheric, and since then it has been riding the wave and producing some of the most interesting graphics and clothing in the skate-apparel industry. The Windows rip-off logo is a particular favourite of ours.

Another New York skate brand to emerge from a genuine passion for skate culture, Alltimers began catching attention with weirdly shaped, extravagantly patterned boards. Its clothing is a little more muted but carries over the graphics and a few unexpected cultural references (who remembers Splash! starring Daryl Hannah and Tom Hanks?).

It adds up to a collection of tees, hoodies and other essentials that offer something genuinely distinctive in an increasingly crowded space.

One of two labels run by pro skater Alex Olson (himself the son of LA skater Steve Olson), Call Me 917 is a true skateboarder’s skate brand. As well as boards, the brand does authentic long-sleeved tees, hoodies, baseball caps and more, all emblazoned with an eclectic range of prints. The visual style takes in rave culture, collegiate references, film and more.

Olson’s other brand, Bianca Chandon, is more overtly fashion-y but still well worth a look too.

When Nike’s skatewear offshoot launched in the late 90s, it wasn’t much loved by a community that prides itself on its counter-culture roots and independent labels. Nike SB has slowly won people over, though, signing up pro skaters to add to its credibility. And the offering is good.

Alongside well-loved skate shoes, the clothing collection mixes pared-back functional pieces with colourful 90s throwbacks, as though to remind everyone that the sportswear giant has been doing this for more than 20 years.

It’s probably fair to say that Soulland is a menswear label that’s heavily influenced by skatewear, rather than a dedicated  skateboarding brand. Co-founder Silas Adler has skated since he was 10, though, and produced capsule collections specifically referencing the scene. The brand has also collaborated with the likes of Nike SB.

The main collection includes a lot of hoodies and skate-inspired logo tees, but brings a degree of Scandi minimalism to the scene too.