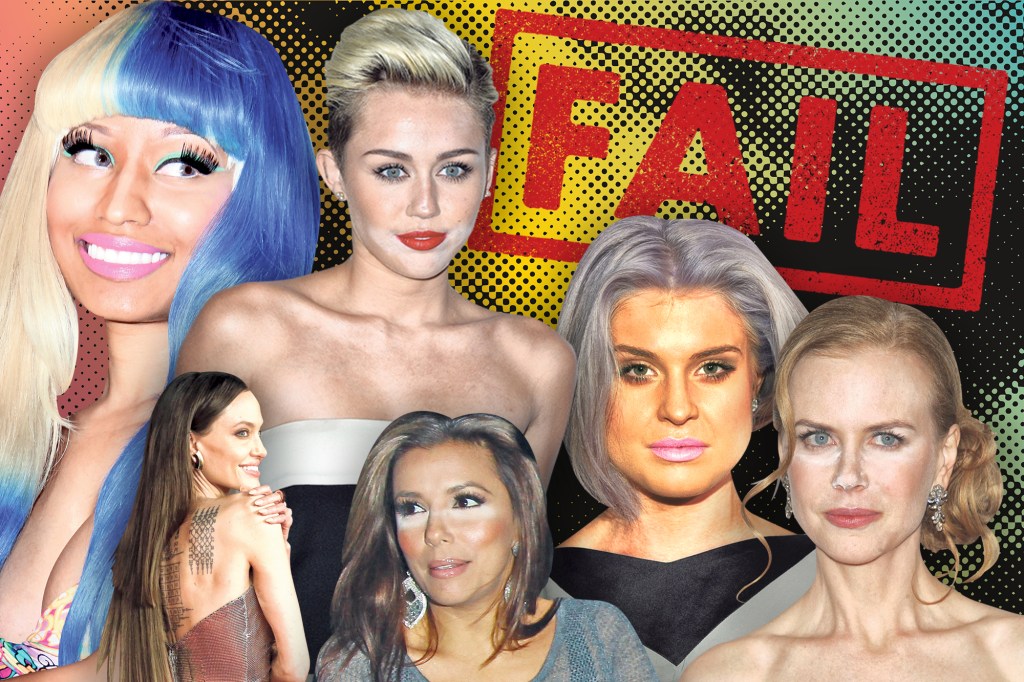 Angelina Jolie’s choppy-lock look isn’t the only celebrity glam that didn’t quite make the cut.

And in the days since the 46-year-old stunner’s uneven, unblended hair extensions stole the show during the red carpet premiere of “Eternals” at the Rome Film Festival Saturday, some of the most unforgettable celeb beauty blunders are rearing their ugly heads online.

“If we all thought Angelina’s hair was bad. Let’s not forget [Halle Berry’s] bob faux pas,” one Twitter user wrote, comparing Jolie’s jagged ‘do to the one-time Catwoman’s questionable coiffure.

The 55-year-old Academy Award winner’s discombobulated bob served as the target of harsh social media rebuke in April when big-screen beauty Berry debuted the hairdo at the 2021 Oscars. She later revealed that her wild look was merely a wig.

Here are some of the most memorable bombshell beauty busts in recent years.

On the evening she was to be crowned Maxim’s Hottest Woman in 2013, the then-20-year-old “Wrecking Ball” singer’s night was wrecked by a visible abundance of loose powder makeup smeared across her chin and cheeks. The powder, meant to reduce facial shine, can give off a chalky white glow when placed under the intense light of flashbulbs at a red-carpet event. The weird phenomenon is often called a “flashback.” And Cyrus, now 28, was face to face with several hundred bright camera flashes at the time of her cosmetic malfunction — leaving the ex-Disney character with a “why so serious” Joker look rather than a Maxim’s hottest hottie mug.

Orange you glad Selena Gomez is rocking her natural hue again? The “Only Murders in the Building” star is. Because an unsightly spray tan snafu once rendered her skin “completely orange.” Gomez, 29, lathered up in spray-tan lotion ahead of the 2018 Met Gala and, before she knew it, she was unrecognizable. “[I] put on some of this tanning lotion, and it looked really beautiful and very even,” the actress told Vogue in September. “As the evening kept going on, [my skin is] getting a little darker and darker, and I didn’t notice it.”

After sneaking a peek at a paparazzo’s camera and being shocked by her overdone derma, an embarrassed Gomez hightailed it out of the high-fashion fete. But — knowing her toasted skin tone would be the butt of many social media memes — she shared a silly, self-deprecating Instagram video of herself running away from the event with the caption: “Me when I saw my pictures from MET.”

Social media distress sirens blared when Berry, 55, sauntered down the Oscars red carpet donning a disheveled, ear-length asymmetrical bob with shaggy bangs. Digital detractors likened Berry — often lauded for oozing sex appeal with her signature pixie cuts — to cartoon villains like “Shrek” antagonist Lord Farquaad and actor Josh Hartnett’s unkempt coifs from the early aughts. But after a few days of witnessing nonstop wisecracks, the “Die Another Day” diva took to Instagram with a picture of her shoulder-length hair, reassuring fans she hadn’t cut her real tresses off. She captioned the snap “Oscar bob…just kidding,” and added the laughing emoji to punctuate the silly haircut chaos she’d caused.

The “Desperate Housewives” hotshot was in desperate need of a beauty blender back in January 2011. Cameras captured Longoria, now 46, strutting out of Katsuya restaurant in Hollywood sporting layers of thick pale powder underneath her eyes. And although the makeup was meant to brighten her skin, it looked more like a superhero mask. But the lionhearted Longoria didn’t let the setting-powder setback keep her down. The flawless fox is currently a spokesperson for L’Oréal.

“Queen” rapper Nicki Minaj, 38, got her contouring royally wrong during the American Music Awards press conference in 2011. The native of Trinidad and Tobago’s wig and faux eyelashes were on point, but her nose stood out — and not in a good way — thanks to a visible stripe of extra-light makeup down the front and too-pale foundation on her cheekbones.

Nicole Kidman’s powdery nose took center stage during the Monte-Carlo Gala for the Global Ocean in Monaco back in 2019. And this wasn’t the first time Kidman, 54, suffered a milky makeup mishap in public. The “Being the Ricardos” star slayed a face full of white powder at the Women in Film Crystal + Lucy Awards in June 2015. And she committed the same cosmetic crime at a 2009 red-carpet event in NYC. And even though “flashback” is a common industry woe, Kidman’s repeat offenses put the Aussie beauty in the hall of fame of fails.

Kelly Osbourne spooked fans with a yellow glow at the 2012 Art of Elysium Heaven gala in Los Angeles. The heavy metal heiress stunned crowds in a layer of jaundice-esque foundation and pale pink lipstick. Her pastel makeup moment notwithstanding, Osbourne, now 36, has since undergone a number of beauty transformations — she’s currently got punk-rock purple hair.

At the height of Lohan’s heyday, during the mid-2000s, the saucy movie star’s spray tan always played leading role in the headlines. The natural redhead, now 35, spent her late teens and early 20s soaking up pseudo sun rays in an attempt to turn her fair epidermis into golden-brown goodness. But, she took things too far. The “Freaky Friday” lead’s affinity for tanned skin had her looking more crispy than sun-kissed. Lohan has since appeared to have let the sun set on her tanning habit.