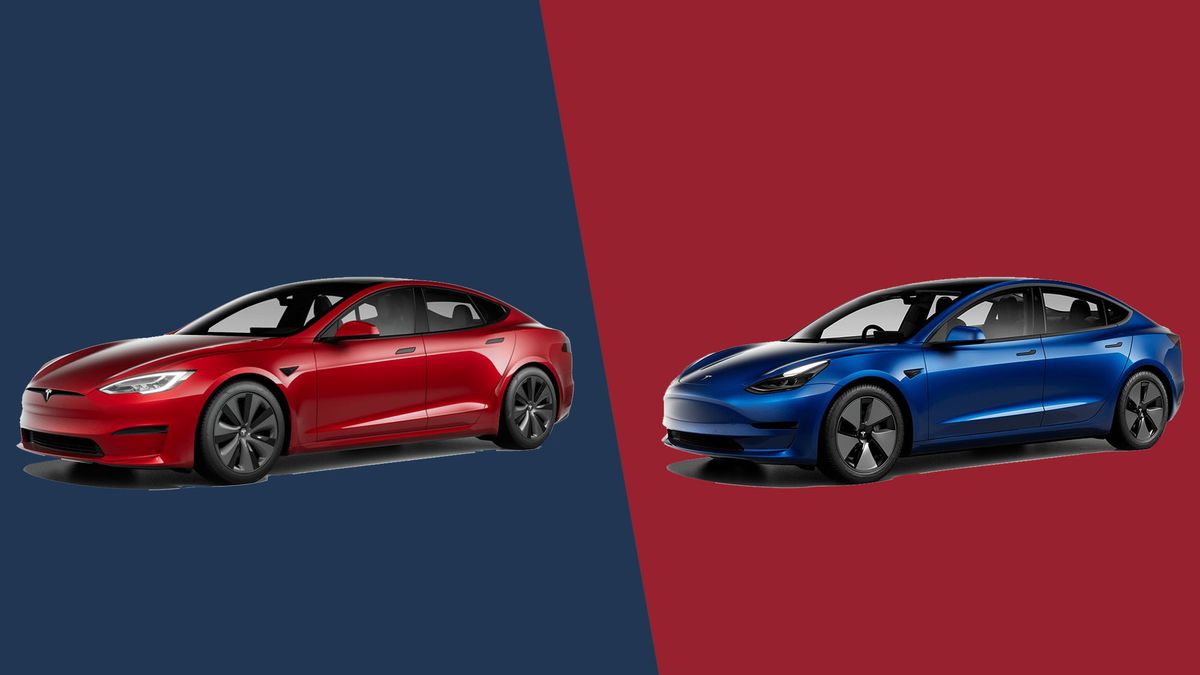 The Tesla Model S might have been around for a number of years now, but the large executive sedan was the first electric car that really put Elon Musk’s company on the map.

Aside from the original Tesla Roadster, it was the arrival of the Tesla Model S in 2012 that gave a clear indication of what Musk had in mind for the future.

Tesla’s Model 3, on the other hand, is a newer car and offers more of a traditional sedan style experience compared to the executive hatchback feel of the Tesla Model S.

It’s a little smaller and more compact, but still comes packing all of the power, performance and tech wizardry that makes all models in the Tesla range appealing. So, which one should you buy given the choice?

The Model S and Model 3 are both instantly recognizable as Tesla’s. The former has been around for much longer, but still looks surprisingly fresh in its latest incarnation.

Tesla has effectively reinvented it with an even higher-powered Plaid version of the car too. The Model 3 sedan is newer and the stubby ‘budget’ design that makes it family-friendly has turned it into a best-seller.

Both the Tesla Model S and Model 3 offer a 5-seat configuration, but they do it slightly differently with the latter offering up a slightly less roomy feel.

That’s hardly surprising as it’s the smaller of the two cars, which is why the Model S tends to win people over with its impressive cargo carrying capacity: 28 cubic feet as opposed to the Model 3, which has just 15 cubic feet to play with.

This highlights the main difference between the cars and why one might be more useful to you than the other if you have lots of ‘stuff’, and people, to get from A to B. The Model S hatchback makes access from the rear a breeze too, especially when compared to the Model 3’s regular trunk lid.

The Tesla Model S design has recently undergone a tweak or two with new wheels improving the look, some subtle creases added here and there along with beefed up headlights and taillights. Blacked out trim on the newest model is a seemingly minor thing, but the overall effect is quite dramatic.

The design is therefore a bit of a compromise too, as it’s shorter and, perhaps, slightly less lean looking than its older relative. Latest tweaks to the Tesla Model 3 also see some of the chromework being switched out for black trim.

However, the design of both cars benefits from a panoramic glass roof, which really helps to lift the interior experience as well as making the exterior look much more refined.

As of now, there are two Tesla Model S variants with the Plaid edition being the car to go for if you’re looking for unbridled performance with its 1,020hp peak power figure grabbing the headlines.

Tesla claims a 0 to 60mph time of just 1.99 seconds and a top speed of 200mph. Even if this isn’t entirely accurate you can be sure performance will be incredibly lively.

This is largely down to the Tri Motor powertrain setup with the car running on 19 or 21-inch wheels.

The Tesla Model S Long Range edition sounds positively sedate by comparison, but it still packs a considerable punch thanks to 670hp from the Dual Motor powertrain. Again, acceleration is certainly fast with a 0 to 60mph time of 3.1 seconds taking you up to a top speed of 155mph.

Being the cheaper car of the two, the Tesla Model 3 is less potent for obvious reasons, but it’s hardly a slouch no matter which model you buy.

According to Tesla the Performance edition promises to get you from 0 to 60mph in 3.1 seconds thanks to the Dual Motor All-Wheel Drive setup and 20-inch wheels, right up to a top speed of 162mph.

The Long Range AWD model will achieve 0 to 60mph in 4.2 seconds and has a top speed of around 145mph using the same Dual Motor All-Wheel Drive arrangement and 18 or 19-inch wheels.

One of the most appealing aspects of Tesla ownership is the ability to enjoy plenty of range and, in the case of some models, copious amounts of it. That’s not to say that even base-level Tesla’s are miserly with their battery range.

Things are set to get better over time too, with Tesla introducing its V3 Superchargers that will deliver more powerful charging that looks set to reduce charge times by a quarter according to the company.

The Tesla Model S is undeniably impressive in its Long Range Plus guise, which gives you an EPA-estimated 405 miles of range to play with. When it’s time to top up, the car can accept up 250 kW via the Tesla Supercharger network.

Plump for the super potent Tesla Model S Plaid edition though and you’ll lose a little off the range, which drops to 390 miles, but you’ll gain in performance and the overall fun factor. Again, rejuicing the car can be done using the 250 kW Supercharger network.

You don’t get quite the same range if you’re buying the Tesla Model 3, but the three models still offer solid figures. In the Performance edition, which features the Long Range battery you can expect an EPA-estimated figure of 315 miles. Charging can be carried out using Tesla Superchargers up to 250 kW on a pay per use basis.

The Long Range AWD car offers 353 miles range using the same battery and charging options. Opt for the Standard Plus edition though and range estimates drop down to 263 miles, with 170 kW maximum Supercharging on a pay per use basis.

If you’re a fan of in-car tech then any Tesla model makes a good bet. All cars come with a host of innovative features with a few fun ones thrown in for good measure.

The range also benefits from a steady stream of over-the-air updates, which means that cars can be updated remotely to add improvements and enhancements in the future.

Indeed, Tesla’s latest plan is to make its Full Self-Driving system (FSD) available for both the Model S and Model 3 as a subscription option, with prices in the US set at $199 per month using the basic autopilot or $99 if the car has the enhanced autopilot feature built in.

Considering its age, the Tesla Model S still sparkles especially since the Plaid edition has had something of an interior makeover. Central to the action is the 17-inch Cinematic display, which boasts 2200 x 1300 resolution producing color and clarity that really pops. It’s landscape oriented now too, as opposed to earlier screens that were portrait.

The other attention-grabbing feature is Tesla’s yoke steering wheel, which would look more at home in a luxury private jet. Tesla has replaced the steering column levers with buttons too, all which might be a little bit too innovative for some buyers.

Elsewhere, the improved rear seating area features a supplementary 8-inch rear screen between the front seats. Tesla wants to give occupants everything they get at home too, with lots of processing power on tap that lets passengers enjoy their favorite Tesla Arcade game thanks to wireless controller compatibility.

In fact, Bluetooth connectivity, wireless and USB-C charging let you do pretty much whatever you want and with the gadget of choice. The Tesla Model S also offers impressive audio in the shape of a 22-speaker system that packs 960watts of power, which benefits from noise cancelling technology to improve the experience.

The great thing about this is the way that it makes the interior even more minimalist as the bulk of the car’s controls are located within the screen area.

Accessing the car is similarly fuss-free by using your smartphone, which you can subsequently charge alongside another handset in the centre console.

The cheaper price tag of the Tesla Model 3 does highlight compromises though, with a 15 speaker sound system proving slightly less impressive than its more expensive relative. There’s no Apple CarPlay or Android Auto either.

Both Tesla’s benefit from other cool touches, most notably in the case of the ventless air-conditioning and heated seats.

The ability to have the car steer and accelerate within its lane is cool too, but the option to have Full Self Driving capability is also tempting.

This lets you navigate on Autopilot, carry out automatic lane changes, park your car automatically and even summon it if you’re standing close by and can’t be bothered to go and get in under your own steam.

However, you’ll need to pay a $10,000 premium to get full self-driving capability for either car.

As is the case with all manufacturers, production costs and demand can affect how much cars cost and Tesla is no exception.

In fact, Tesla pricing and the range itself verges on unpredictability, with model variants coming and going and price alterations often appearing out of nowhere.

The Tri Motor, All-Wheel Drive, Plaid Tesla Model S costs $129,990 / £118,980 (around AU$176,000). For American purchasers, Tesla also points out that additional savings, such as the $1,500 California Clean Fuel Reward and other incentives can help to shave some money off the overall purchase price.

The same sort of savings outlined above can also help to cut a little off the asking price of these cars too. Pricing is also very much a start line figure as orders can be customized to suite individual tastes and requirements.

Tesla continues expand its range, with a new more affordable model that could be up to $10,000 cheaper than the cheapest Tesla Model 3 in the pipeline according to Elon Musk.

That might pull some buyers away from the existing Model 3, which is still the most affordable current model.

Nevertheless, the Tesla Model 3 is perhaps the way to go if you’re looking for the full Tesla experience, but you don’t need the bulk of a bigger car.

There are some cool updates on the way for the car too, with Elon Musk announcing that it, along with the Model Y will get auto shifting on cars that have full self-driving capability.

However, if you’re in the market for a large executive-style sedan the Tesla Model S still makes an awful lot of sense. The build quality of this car has definitely improved compared to early examples when Tesla was still finding its production feat. And, with the arrival of the Plaid edition it’s also been brought bang up to date.