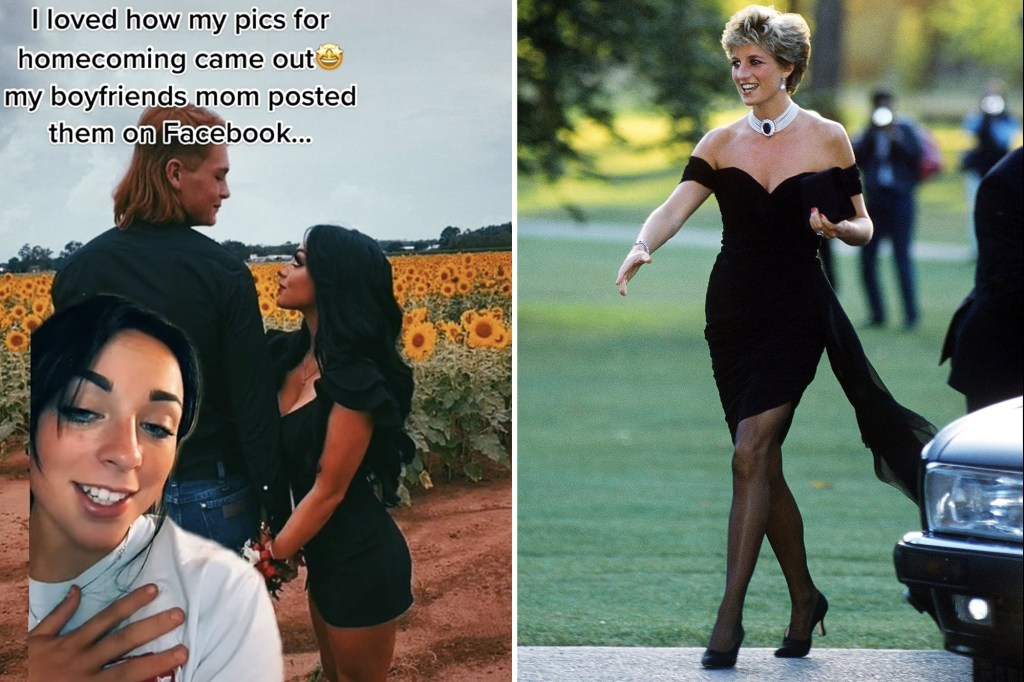 Princess Diana would not approve.

A high school student claimed she was shamed by adults via Facebook for her homecoming dress that was inspired by the late Princess of Wales.

Grace Brumfield from Alabama posted a TikTok about her experience that has accumulated over 10 million views, 2.5 million likes — and a whole lotta trash talk.

The 17-year-old’s now-viral video features homecoming photos of herself and her boyfriend looking very lovey-dovey in a gorgeous sunflower field. Brumfield then shared screenshots of comments she received from angry baby boomers on the social media app. Many commented saying the lewk was “trashy” and “inappropriate.”

Another hater’s comment that Brumfield posted in her TikTok: “Wow did her parents see her in that? Way too short and trashy on such a pretty girl. Leave something to the imagination, no need to put it ALL out there.”

The so-called “inappropriate” dress was a black mini with ruffled sleeves. The outfit was reminiscent of a very chic and iconic Lady Di fashion moment. The homecoming dress reminded viewers of Diana’s black “Revenge Dress.” The off the shoulder, Christina Stambolian-designed evening gown was worn to an event in 1994 at the Serpentine Gallery in Kensington Gardens.

The short and sultry frock was worn just shortly after her ex-husband Prince Charles admitted to having an adulterous affair with Camilla Parker Bowles. Hence, she wore the dress out of “revenge” because of its scandalous nature and hemline.

Brumfield spoke to Buzzfeed News about the ordeal, saying, “We took our homecoming pictures in a sunflower field that was planted in memorial for a fellow peer named Dalton Defilipi, who passed away last year.” Her boyfriend’s mom posted them in a Facebook group called Sunflowers and Daisies. And that’s where the grownups got nasty.

“My boyfriend’s mom started telling me how the pictures had somewhere around 32,000 likes. She was talking about all the nice comments, and then she said, ‘And of course, there are the negative ones as well,’ ” she continued.

The high school junior added, “My heart kind of immediately sank because I felt so confident about my appearance and attire that night, and I didn’t want that confidence I had to be in a way stolen from me. I have been picked on my entire life — my freshman year, I moved schools because it got so bad.”

She explained she was mostly disappointed at the fact that the commenters were mostly mothers and grandmothers. “The only question I had was, Why? I didn’t see anything wrong with my photos, so why were there negative comments?” Brumfield wondered.

One comment in particular that she said hurt her the most was from a woman named Rhonda. “She said that based on the way I was dressed, I was asking to be raped. As a victim of sexual assault, it just made my blood boil because clothes are not the reasons that men and women are assaulted,” Brumfield told the outlet.

“I dress the way I dress because I know what looks good on my body and what makes me feel confident in my own skin. Nobody else has the right to tell someone to cover up more because it’s distracting — older men and women need to be taught to control themselves,” Brumfield said.