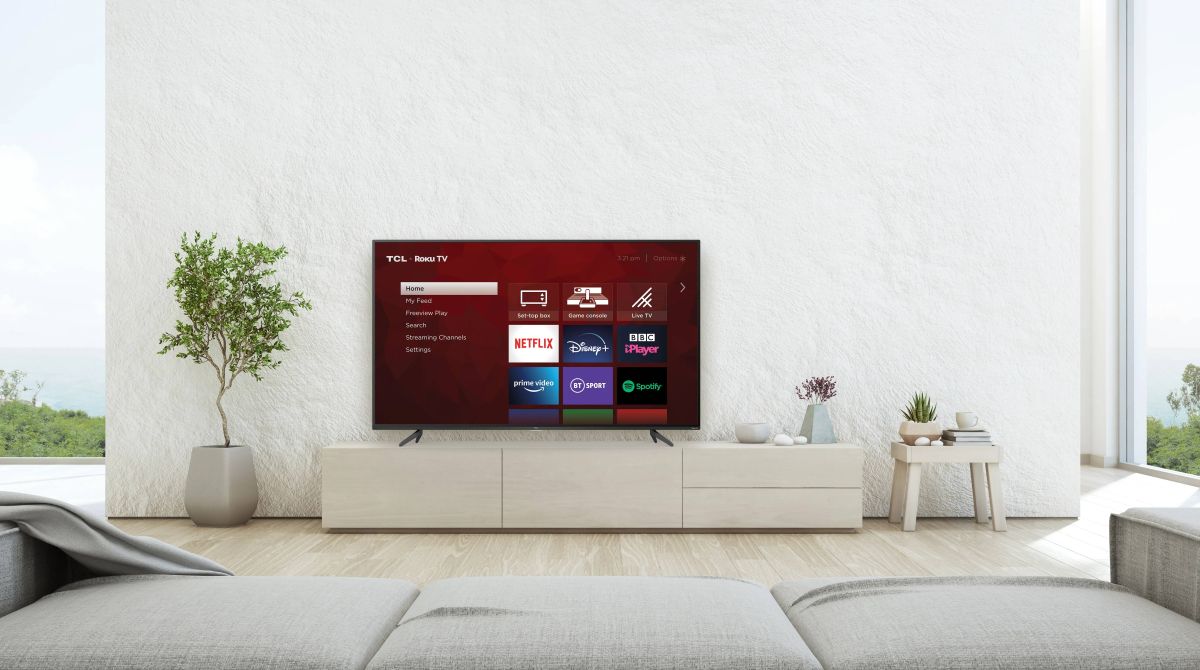 The TCL RP620K series of 4K TVs are the first Roku-powered devices from the TV brand to hit the UK, and this budget-friendly selection could tempt anyone looking to upgrade their home cinema display from HD.

The Roku TV OS is really easy to use and provides simple yet effective quality of life features (such as the ability to label HDMI ports and rearrange the homepage) that make navigating to your favorite devices and streaming services a breeze.

We had the chance to test out the 55-inch version and, while you shouldn’t expect to be blown away by the hardware, for a budget TV you’ll get great quality performance. This is helped by the TV’s use of Dolby Vision, a powerful HDR technology that can output brighter colors and darker blacks than the usual HDR 10 Plus standard.

Unfortunately, the TCL RP620K series’ LCD displays aren’t quite powerful enough to get the most out of the software, but Dolby Vision still gives it a leg up compared with other budget options.

Audio can be more than a little disappointing, but if you can spare some change for a budget soundbar you can hopefully create a low cost home cinema you can be proud of.

If 55-inches sounds too big to handle, too you can opt for 50-inch or 43-inch displays, or alternatively you could max out with the largest 65-inch option.

If you’re on a budget, this 4K TV’s £449 price point (for the 55-inch screen which we tested) is very likely an attractive offer. If that’s pushing the boat out too far, though, you could instead snag the smallest 43-inch version for as little as £349 – or you could always go big with the 65-inch version at £549.

For now, the screen is only available at Currys but that limited availability shouldn’t be a problem. All versions of the RP620K are in stock and we’ve actually already seen them discounted too, making them an even better bargain.

The TCL RP620K series isn’t going to blow anyone away with their design, falling very much into what you’d expect from a modern smart TV in their price range. This means you’ll lose out on features like Philips Ambilight, but you’ll save money and still get a sleek looking display that has a barely noticeable (1-2cm) bezel around the outside.

If you’re looking to sit this screen on top of a TV unit you’ll need one that’s over 41 inches (105cm) as that’s how far apart the 55RP620K’s feet are. This isn’t enormous for a 55-inch screen, but it’s something to keep in mind before you make a purchase and find you don’t have space for it.

On the back, you’ll find four HDMI 2.0 ports to connect your favorite devices – with the HDMI 1 slot including ARC support to hook up your soundbar for an improved audio performance. You’ll find an optical-out, USB and even a headphones port too.

The remote control is similar to what’s standard for Roku TV devices, including a sleek design and easy access buttons for Netflix, Spotify, Rakuten TV and Apple TV Plus. If you’re someone who’s prone to misplacing your TV remote, you can also download a Roku controller app to your smartphone that works just as well.

As we’ve mentioned already, the TCL RP620K is the company’s first display to run on Roku TV in the UK. A few other brands (such as Hisense) have previously released Roku TV screens over here, but it’s not as widespread as some other TV operating systems. However, just because it isn’t widely used doesn’t mean it’s not an excellent service.

We found the Roku TV app a breeze to use thanks to its clean design and almost every app we needed was available; the layout is completely customisable too so we could push our favorite services to the top of the list.

Additionally, if you can’t remember what platform your favorite show or film is on, Roku Search is a handy tool that will tell you exactly where you can find it and how much it might cost you. Our favorite feature, however, was the ability to relabel HDMI ports, so we will never again forget if our Xbox is hooked up to HDMI 1 or 2.

If you own a Google Home, Amazon Echo, or Apple Homepod device, you can link them with this TV to control it with voice commands. This works as well as any other voice-controlled device in your home, and gives you yet another option for controlling what’s on-screen when you lose your TV remote.

Some services aren’t yet supported by Roku though, such as Twitch, Apple Music, and Amazon Music, so you may need to plug in a streaming stick if you want to enjoy the content these and other platforms have to offer through your TV.

For this price, you can’t hope for stellar picture quality, though the TCL RP620K fights hard to give you a performance that more than holds up against its budget TV rivals.

One major advantage is the screen’s use of Dolby Vision. This technology is a cut above regular HDR because it adds an additional layer of information on top of the core video signal. In practice, you can expect bolder bright colors and darker blacks, giving you a more full and nuanced range of colors.

Dolby Vision is supported by content across Netflix, Amazon, Disney Plus, and UHD Blu-Ray, giving you plenty of options for films and shows that will put your display to good use.

Despite this great advantage, don’t suddenly expect the TCL RP620K TVs to compete with its high-cost competition. The LCD display used by these televisions isn’t quite bright enough to truly get the most out of Dolby Vision compared to a more premium screen.

In practice, this means that darker scenes may still lack some clarity and bright colours might not be as striking as on more expensive devices. You can try to combat this by selecting the Bright option for all content types in the Roku TV settings, but even then you won’t quite catch up.

We also found that motion blur and smear can occasionally crop up, though we never found this to be an immersion killer.

While the picture quality is admirable, the audio definitely takes a hit compared to more expensive devices. The 2x8W speakers don’t quite have the oomph to give cinematic scores their true feeling, and a lack of features such as Dolby Atmos means audio won’t immerse you in the worlds you’re watching.

However, it’s not all bad. We found that at moderate volumes (that will be more than suitable for most – especially if you want to keep neighbors happy) you never had to worry about audio distortion and voices have a clarity that you might not find on other budget displays.

If you can spare some change for a cheap soundbar, or already own one, we’d definitely recommend setting it up for use with your TCL RP620K to give your viewing experience a much needed audio boost. While this add on isn’t necessary, for just a bit extra you can make a budget home cinema you can be proud of.

Gamers looking for a budget screen to play their home console on won’t be too disappointed with this device either. Its 4K screen with HDR will give you a fine picture quality, and its 60Hz refresh rate means you’ll be able to enjoy gaming up to 60fps if your console can manage that.

While not including HDMI 2.1 ports seems like a let down, the TCL RP620K lacksthe hardware to take advantage of them anyway. You were never going to get 8K or 120Hz out of this device, so HDMI 2.0 should more than suffice.

Lastly, this screen’s Auto Game Mode promises 15ms lag time that could help give you boost in multiplayer matches or in pixel-perfect platformers.

Unfortunately it won’t quite hold a candle to the best gaming TVs out there, but compared to other displays at this price it seems to be one of the better options out there.

You’re on a budgetIf you want to upgrade your home cinema to 4K, this is a brilliant option that won’t break the bank but will still give you a lot to love about its performance.

You want simplicityIf you find smart TV features confusing, that could all change with the Roku TV operating system. It’s a breeze to navigate and offers several quality of life features that make it accessible to even tech novices.

You love streaming servicesRoku TV makes it easy to access all your favorite streaming services like Disney Plus and Netflix. If you’re subscribed to several, this will be a TV that will let you take full advantage of everything you pay for.

You demand audio excellenceThe audio performance is what you’d expect from a TV at this price, which isn’t the best out there. If you demand high-quality sound but don’t have room for a soundbar, you’ll want a different screen.

You’re after a top quality gaming displayUnfortunately these TVs top out at 4K resolution with a 60Hz refresh rate. For many players this will more than suffice, but for better picture quality and to take advantage of higher frame rates you’ll want to find an upgrade.