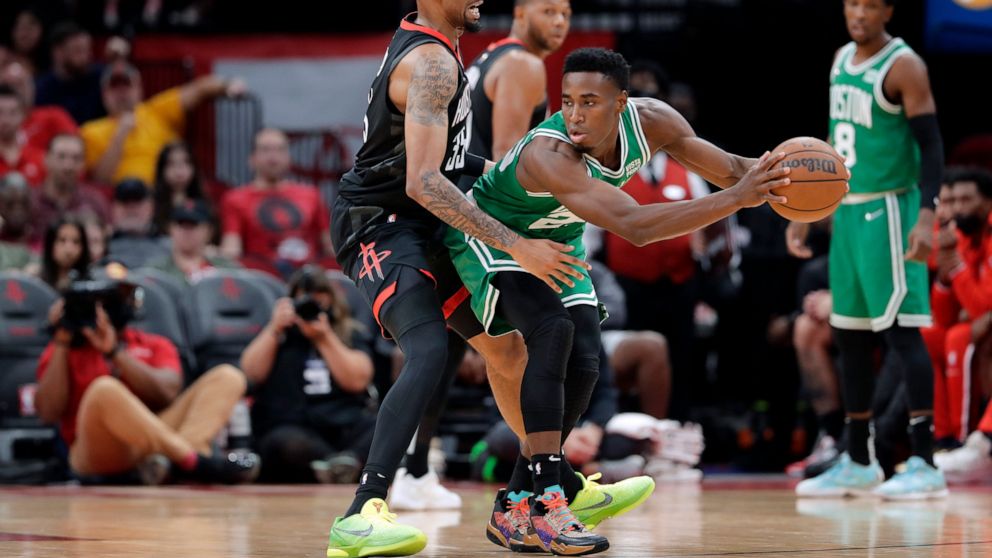 HOUSTON — Jayson Tatum had 31 points and nine rebounds and the Boston Celtics avoided their first 0-3 start since the 2013-14 season with a 107-97 win over the Houston Rockets on Sunday night.

Tatum, had 20 points in the first half on 8 of 13 shooting. Al Horford finished with 17 points, including 11 in the third quarter, and 10 rebounds.

Dennis Schröder, who started for the injured Jaylen Brown, finished with 18 points and Grant Williams added 18 points off the bench. Boston shot 44% from the field and hit 15 of 47 on 3-pointers.

Second overall pick Jalen Green had the best game in his young career, scoring 30 points including making 8 of 10 on 3-pointers. Christian Wood had 20 points and nine rebounds, and Kevin Porter Jr. added 15 points for Houston, which shot 43% and hit 14 of 32 on 3-pointers.

After Houston knotted it at 55 on a lay-up by Green two minutes into the third, Boston went on a 10-0 spurt started with four straight points by Horford and capped on a 3-pointer by Tatum.

The Rockets responded with five straight points to cut the lead in half, but Boston responded with a 24-9 run to open the lead to 20 on a three-point play by Horford with 1 ½ minutes left in the third.

Celtics: Boston committed 12 turnovers and forced Houston into 20 turnovers, which the Celtics turned into 28 points.

Brown was out of the lineup with left patella tendinopathy. Brown had led the Celtics in scoring through the first two games, averaging 27.5 points per game. Boston coach Ime Udoka said Brown’s injury was something he dealt with last season, missing a few games.

“We just want to be cautious with it,” Udoka said. “We have a back-to-back coming up, give him an extra day of rest and hopefully, he will be good to go tomorrow.”