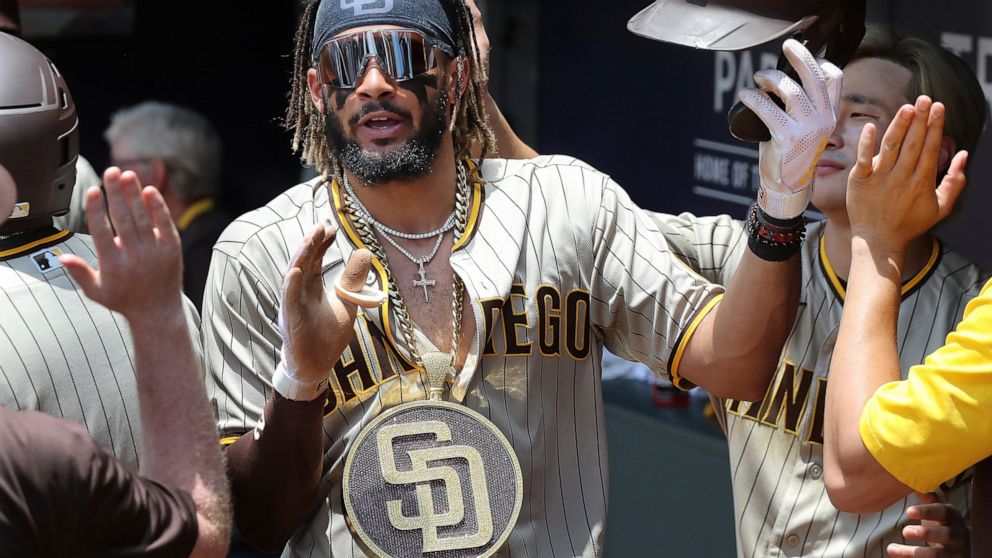 Fernando Tatis Jr. hit a two-run homer, starter Chris Paddack reversed his recent struggles and the San Diego Padres beat the Atlanta Braves 3-2 in the first game of a doubleheader

ATLANTA — Fernando Tatis Jr. hit a two-run homer, starter Chris Paddack reversed his recent struggles and the San Diego Padres beat the Atlanta Braves 3-2 in the first game of a doubleheader on Wednesday.

Tatis made it 3-0 in the fifth inning against reliever Shane Greene when his NL-leading 29th homer landed in the left-field seats. The All-Star shortstop has eight hits, seven runs scored and six RBIs in his last five games.

Paddack (6-6), who had a 10.31 ERA in his last five appearances, worked five scoreless innings, allowing three hits with no walks and one strikeout.

All-Star closer Mark Melancon wrapped it up for the Padres in the seventh, earning his major league-leading 28th save in 32 chances.

The Padres went ahead 1-0 in the fourth when Jurickson Profar doubled off the right-field wall with one out, advanced on Kyle Muller’s second wild pitch and scored on Ha-Seong Kim’s sacrifice fly.

Muller (1-3) allowed two hits and walked three in four innings, working out of jams in the first and third. Greene, who came on to start the fifth, saw his ERA increase to 10.38.

The Braves got within 3-2 in the sixth against Drew Pomeranz when Freddie Freeman singled, advanced on Ozzie Albies’ double and scored on a passed ball. Albies scored on Austin Riley’s sacrifice fly.

Paddack retired the first five batters he faced before Guillermo Heredia singled in the second. Kevan Smith got the second hit off Paddack in the bottom of the third but was stranded at third.

San Diego had dropped four of six and began the day third in the NL West, 5 1/2 games back of first-place San Francisco. The Braves entered the doubleheader 3 1/2 games behind the first-place New York Mets in the NL East.

The Braves have scored nine total runs in their last eight doubleheader games.

Profar made a diving catch on a head-first slide in center field to rob pinch-hitter Abraham Almonte in the fifth.